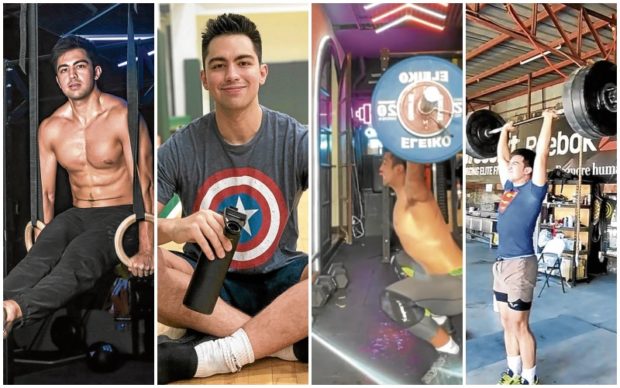 For Derrick Monasterio, working out and weight training aren’t just for aesthetic purposes. There’s a loftier goal: He hopes to become a competitive weightlifter and represent the Philippines in the Olympics. “Hindi naman talaga ako nagpapa-sexy, eh. I work out because I want to get stronger… I want to become an Olympic athlete. I also want to join CrossFit Games in the United States,” he said in a recent virtual conference for his latest single, “Virgo.”

By the looks of it, the 26-year-old actor is quite serious about this new endeavor. He said he took up weightlifting two years ago and has been training regularly ever since.

“I’m focused on it right now. I train every day. I have three coaches and follow a meal plan specifically for me,” he related. “As far as training is concerned, I feel like I have come a long way.”

Derrick also had a lifestyle overhaul. “I have never been more disciplined. The last time I drank alcohol was a year ago. I now go to sleep early, especially now that there’s a pandemic and there aren’t as many shows. I haven’t learned to change my habits,” he said. “I hope it all translates [to good results]. It must be nice to represent the country in international competitions.”

Needless to say, seeing Hidilyn Diaz win the gold medal in the women’s 55-kilogram weightlifting category at the Tokyo 2020 Olympics inspired Derrick to work even harder.

“I hope I can train with her. Even if I’m bigger than her, she’s way stronger and lifts much heavier weights. I would love to ask her for tips…about her techniques,” he related, adding that he has been sending Hidilyn messages on Instagram. “I haven’t received a reply yet!” he said, laughing. “She must be very busy and so many people are probably messaging her, too.”

“Given the chance, I would love to have my plates and shoes signed by her,” said Derrick, who’s part of the ongoing prime-time cultural drama series, “Legal Wives.”

Another career peg of his, Derrick said, is Richard Gomez, a fencing gold medalist at the 2005 Southeast Asian Games. “He’s a model, actor and athlete. I want to be like him,” he said. “I want to test my limits and capabilities.

One thing about me is that I refuse to give up no matter how tired I am, whatever happens… I hope that mentality translates into sports.”

Training other muscles, too

But it’s not only his body getting regular workouts—his vocal cords need some exercises, too, he quipped. “Since there are no live shows, I just train at home… I practice different songs. Sometimes I record covers and post them online. Our vocal cords are muscles, too, so it’s important to train them…so that they don’t get rusty,” he said. “I vocalize upon waking up or while I’m in the shower.”

His new song, “Virgo” (GMA Music), is a departure from his previous releases, which were mostly slow, romantic ballads. “It’s a party song, but the lyrics are for hopeless romantics. We’re going for The Weeknd-like vibe. I would like to try shifting genres. From being a balladeer, I want to do more pop, R&B and soul material,” he said.

While that will entail making adjustments in his vocal techniques, Derrick, a former member of the Kilyawan Boys Choir, said he’s up for the challenge.

Back with first love

“Back when I was part of a choir, we had to learn different genres of music for competitions, like pop, classical, folk and gospel,” he said. “And if all goes well, I want to continue on this path.”

The last time Derrick released an album was in 2016. Acting has since become his priority, but he’s glad he’s back to doing his first love.

“There were a lot of shows coming my way, so I focused on those. But now that we have more time at home, I think it’s a good time to record music. Singing is my first love and I’m very happy I got to be involved in creating my new song.” INQ