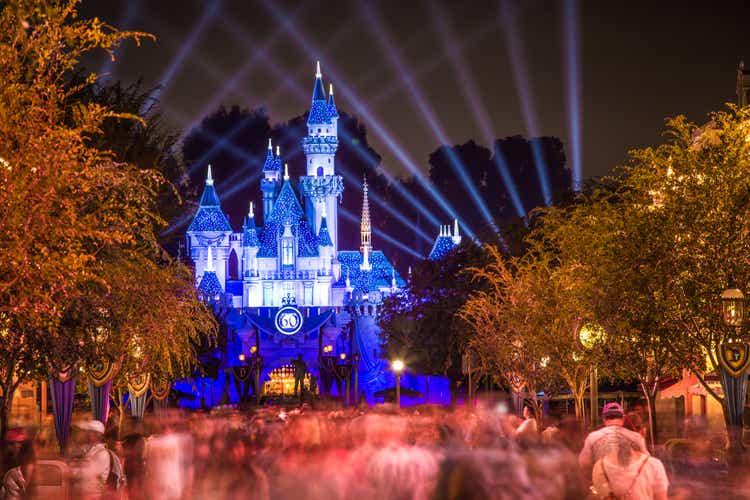 Disney (DIS) just reported an excellent first quarter start to the fiscal year. Even though management is warning of a couple of tight quarterly comparisons, expectations are justifiably robust. Some of the consistent “beats” is due to the fact that management is excellent at managing expectations. The rest is due to some excellent execution that has been the hallmark of this company for quite some time. Management mentioned during the conference call that they have only been in the streaming business two-and-one-half years. Yet they are well on their way to catching the perceived leader Netflix (NFLX) despite the fact that Netflix has taken far more time to get where it is today. For the market, that should have been a typical expectation that comes straight from the master’s level classes of management at business school.

Just about any basic business strategy book (for example “Competitive Strategies” by Michael Porter) will tell you that large companies like Disney tend to wait for the newcomer in a “new” market to build that market to at least $1 billion. Otherwise, it is usually not worth the effort of a large company to enter the market because it will not make a significant difference to company results.

That means that Netflix did the hard work to develop the market. Now the market is large enough to make a significant difference to Disney. Therefore, Disney will pounce. The first thing that happened is Netflix announced some disappointing subscriber guidance. This really should not surprise anyone because these battles are usually pretty lopsided in favor of the established companies.

The first thing that Disney brings to the table is shown above. Disney has a huge amount of cash on hand that can be used to get this company where management wants it to go.

Disney cash flow is seasonal. Therefore, the negative cash flow shown above for the first quarter is not unexpected. The key is that Disney generated more than $5 billion in cash flow in the previous fiscal year. A fair amount of the cash flow was market coveted free cash flow. This fiscal year is off to a far better start. So even if management is warning about a tough quarter or two, there is a lot of evidence that expectations are for a far better performance in the current fiscal year.

Admittedly, there could be a movie or two that would uncharacteristically flop or maybe the weather would be uniformly bad at all the theme park locations. But this company has a rarely equaled record of overcoming challenges to produce good results.

Right now, streaming is “just one more” division. If the move into streaming fails, then management writes off the whole thing and moves on. The company has several ways to grow. Netflix, on the other hand is only in streaming. If Disney succeeds in controlling the very profitable North American market for streaming, that will eventually affect the cash that Netflix has available to develop content. For Netflix, that is a very threatening possibility.

The one thing that management did talk about was broadening the appeal of the streaming service. To that extent some more adult oriented shows are being added and some movies are under consideration (or even further along).

The one thing that very important is the different services offered as shown above. Management has the ability to specialize the various services shown above while putting together “bundles” of these services to appeal to different groups of customers. Oftentimes, a competitor like Netflix does not have the resources to match this kind of flexibility. Disney is able to market to several different parts of the streaming market all at one time. The best part about it is this venture will likely benefit other parts of the company to more than offset any expenses in streaming (that are showing as losses).

The other thing to consider is that Disney has the ability to partner with cable companies and other related industries to quickly introduce its product to a large market. The beginning comment about 2 1/2 years to get where they are now should tell the market about the partnering advantage. The conference call made note of the fact that Disney was considered to have already penetrated one-third of the target market in its short period of streaming existence.

The numbers above show no hint of a competitive issue. Should a competitive issue present itself, the company has both the cash and the free cash flow to solve any challenges. The actual payments shown in the first quarter report for these services understates the value of these customers to the company because a streaming customer will often purchase or use products from other parts of the company. Therefore, the numbers in the report are really not comparable to other streaming company numbers. Most likely, a streaming customer benefits the company to at least $25 per subscription and even $50 would not be unreasonable. It is not unusual for a streaming customer to visit the theme parks, buy Disney clothing for the kids, and watch Disney movies at a theater or on Disney television stations (for example).

In the meantime, Disney reported record results at (at least some) of the theme parks while noting they are expecting improvements in some parks that lag the recovery. The domestic theme parks are evidently ahead of the foreign theme parks in terms of economic recovery. It should also be noted that moving making and releases are pretty much back to normal. Both of those are likely sources of growing cash flows.

The other inevitable change is that Netflix will slowly lose its status as the most watched streaming service. That is already happening as Disney slowly creeps into the top ten. Other competitors are very likely to follow. The future top ten of the various streaming categories will likely become more diversified as time goes on.

Disney has considerable cost advantages over many of its competitors based upon the sheer number of classical movies that are already paid for (and subscribers still want to view). The other cost advantage is that Disney has several ways through the various subsidiaries and licensing arrangements, to make money with any idea. Many items viewed on Disney streaming are already paid for as a result. This supports the previous statement that it is very possible that streaming never has to make a dime for corporate profits to improve considerably. In fact, one could easily view the streaming service as advertising for the other divisions. For the record, though, I do believe that at some point, Disney will profit from streaming. But I also believe that the company does not have to profit from streaming to grow profitably.

Many business strategy books will tell the reader that going against established large companies is usually a losing strategy. So far, the battle for the streaming market between Netflix and competitors like Disney demonstrate the wisdom of that warning. The market is demonstrating that there really is nothing to protect Netflix from more competition. Meanwhile Netflix has nothing else to “fall back on” should the streaming business become untenable.

Netflix already told shareholders in the fourth quarter that cash flow from operating activities went negative again. Unlike Disney, Netflix does not have a lot of history generating cash flow. The battle for streaming has just begun. Clearly, the business golden rule of “he who has the gold makes the rules” applies. Disney has clearly generated “the gold” in the past. Netflix has to figure out how to do that with its model. Personally, I do not think the odds favor Netflix in this battle. Instead, I think that Disney will outperform in the future because there are many ways the company can outperform in combinations of different businesses. Netflix really only has one main way that is now under attack by some very large well-heeled competitors.