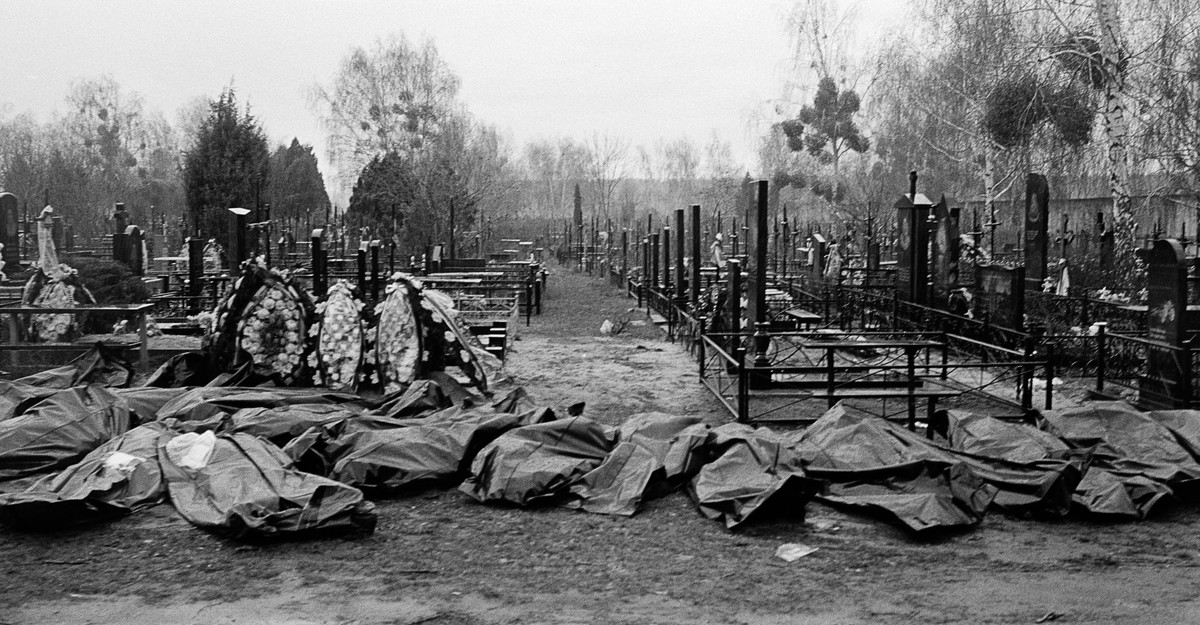 Could anyone, once thrust into a war zone, kill innocents and commit atrocities?

For decades, experts have debated why combatants—including seemingly normal people who once worked standard jobs and love their family back home—are capable of war crimes. The question is one of profound importance; scholars estimate that 80 million to 200 million people have been victims of mass killings since the beginning of the 20th century. In Ukraine, the Office of the United Nations High Commissioner for Human Rights has recorded at least 15,246 civilian casualties since Russia invaded in February, though the true figure is likely much higher. At least 390 children have been killed. In some areas, like Bucha, there is strong evidence that Russian troops tortured, raped, and mutilated civilians.

According to a new book by Jonathan Leader Maynard, an expert on mass killings at King’s College London, ordinary people in any society can commit atrocities if they fall under the sway of certain beliefs about the wars they are fighting. They are not unusually evil. “They’re within the normal ambit of human psychology,” Leader Maynard told me, “and they’re guided by a relatively normal set of human motivations.”

This means that to prevent more mass atrocities in Ukraine and elsewhere, we need to properly understand how ideology motivates people to perform extreme acts of violence.

Andrew Exum: The Russian military has descended into inhumanity

Leader Maynard points to three theories commonly used to explain mass killings and war atrocities. But all three can be debunked.

The first explanation is what I call the Broken Brains hypothesis. This is the notion that the sadism of torturing innocents or committing genocide makes sense only if the perpetrators have abnormal brains, or even are psychopaths. Experts turned to the Broken Brains theory when trying to understand the Nazis. An array of psychiatrists closely examined and interviewed the Nuremberg war criminals. After one of the top Nazi perpetrators, Robert Ley, hanged himself while awaiting trial, his brain was preserved, shipped by air mail to the United States, and studied by neuropathologists, who found that he had brain damage, “a longstanding degenerative process of the frontal lobes.”

But as research continued, it became clear that Ley was an outlier, that the architects of the Holocaust likely did not have brain pathologies, and that the Nazis’ genocidal machine had so many people pulling various levers that most of them had to be neurologically normal. This was not a case of a few psychopaths, but rather of millions engaged in what Hannah Arendt famously called “the banality of evil.”

It’s possible that Russia’s Vladimir Putin is an undiagnosed psychopath, but that can’t explain the widespread barbarism throughout the war in Ukraine, especially as the Russian military fills with conscripts, ordinary Russians who have been forced into combat. There might be psychopaths within the world’s military ranks, and psychopaths might be overrepresented in positions of power. But Leader Maynard says researchers agree that those carrying out horrific violence do not, by and large, have different brains from the rest of us.

The second common explanation is what I call the Lord of the Flies hypothesis—the idea that we are all killers by nature, with an innate capacity for cruelty, and that we commit atrocities when we are on war-zone “islands” that are free from constraints and consequences. Once placed into a conflict, any of us could engage in torture.

Yet research from experts such as Rebecca Littman and Elizabeth Levy Paluck shows that most people have a hard time killing other people. Other scholars have argued that in many of the great battles of history, such as Gettysburg, an astonishing number of guns were left loaded and unused—because it’s so psychologically difficult for untrained killers to shoot human beings, even when their own life is at risk. If most people find it difficult to fire a gun at someone else, how could they electrocute them in a hole in the ground, as apparently occurred in the city of Kherson last month?

A third common explanation for mass killings and wartime atrocities is what I call the theory of Coerced Killers—the idea that evil emerges at gunpoint, that we are capable of atrocities when we feel we have no other choice. Some people do engage in horrific violence only in such circumstances, or because they fear retribution against themselves or their families. But the most rigorous analysis of historical mass violence suggests that these cases make up a tiny minority of the overall picture.

If these three explanations don’t explain mass killings generally—or help make sense of what’s happening in Ukraine—then what does? The answer, according to Leader Maynard’s extensive analysis of atrocities, is ideology. By this he does not necessarily mean the grand isms of 20th-century history, but instead simply a set of political beliefs about how the world works, or should work. Mass killings become more likely when a society engaged in warfare produces a coherent narrative about why extreme violence is desirable or at least justified for a grander strategic purpose. Ideology acts as a social glue, ensuring that the architects of the violence, the rank-and-file soldiers who carry it out, and the broader public all tolerate, or even applaud, atrocities.

Crucially, Leader Maynard finds evidence that perpetrators need not be “true believers” or hard-liners who buy into a regime’s ideological mythmaking. Instead, the existence of the ideology and its widespread acceptance in society can provide a sufficient justification for their violence.

Anne Applebaum: Ukraine and the words that lead to mass murder

Leader Maynard’s research points to six specific ideological factors that lead to mass killings. And I would argue that all six are present in Russia’s war in Ukraine.

1. The perpetrators must see civilians as threats, rather than innocent bystanders. Putin has painted Ukraine as an existential threat to Russia, and has justified operations targeting civilians, including trying to knock out the Ukrainian energy grid.

2. The aggressors must transform the victims into perpetrators, accusing them of committing serious crimes. Russian propaganda calls Ukraine a “Nazi state.”

3. Perpetrators must strip the enemy population of any shared identity. This is why, despite some cultural and linguistic links between Russia and Ukraine, Russian state media refer to Ukraine as a fictional state and paint Ukrainian fighters as NATO puppets.

4. The aggressors must celebrate acts of extreme violence against the enemy population as virtuous patriotism. This a hallmark of the Russian propaganda that is beamed into households through the bloodthirsty nightly television “debates” among Kremlin stooges (even as the Russian government characteristically denies responsibility for atrocities in Ukraine).

5. State propaganda must present violence not as a goal in itself, but rather as part of a strategy to obtain larger goals that the broader population desires. This is why Putin speaks of how Russia’s “special military operation” will help protect Russia from future wars and keep Russians safe from an invasion.

6. Finally, violence becomes more likely when state propaganda makes it seem like there is no alternative to mass killings or war crimes. This factor has perhaps not been as explicit in the current war in Ukraine, but Russian broadcasts have suggested that Ukraine must be wiped off the map.

Given that Russia fulfills these criteria, we could see even more, and possibly more severe, violence in the future. Winning the war in Ukraine, and minimizing the number of atrocities against civilians, therefore also requires winning a war of ideology. This will be impossible to accomplish within Russia, where the media ecosystem is heavily controlled. But morale among Russian conscripts already has reportedly collapsed, so Ukraine and its allies should make every effort to pierce the bubble of Putin’s lies within the ranks of Russian troops wintering in Ukraine.

Ignoring the ideological aspect of war crimes would be easy if we could chalk up mass killings to a few psychopaths, to human nature, or to perpetrators being forced to commit unspeakable atrocities. Instead, we’re forced to confront a more disturbing reality: War crimes, torture, rape, and barbaric murders are often carried out by people who are disturbingly like ourselves. Ordinary humans, when seduced by ideologies of violence, can be extraordinarily brutal.