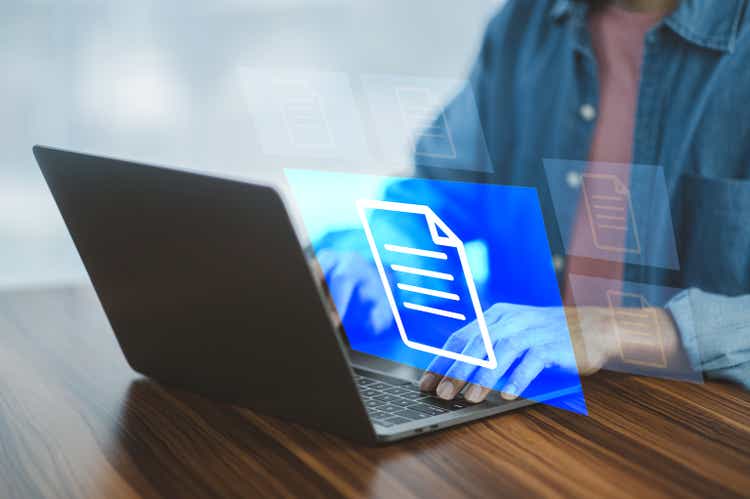 COVID was an incredible tailwind for DocuSign (NASDAQ:DOCU), as the shift to digitization accelerated the adoption of e-Signature, enabling DocuSign to capture a considerable amount of market share to further position itself as the market leader. Alternative data seems to suggest that it has close to 70% of the e-Signature market share, flexing its dominance and powerful branding. In 3Q21, its billing growth peaked at 64% Y/Y and revenue grew as high as 54% Y/Y.

However, just as COVID was a huge tailwind, that quickly turned into a headwind as the economy recovers over time. With the combination of the declining usage of e-Signature and poor sales execution, billings growth rates decelerated from 64% in 3Q21 to 9% in 2Q23, which is its most recent quarter.

During these periods of underperformance, former CEO, Dan Springer attempted to rectify these issues by revamping its sales organization and implementing multiple leadership changes. Those efforts clearly did not materialize quickly enough, and the board of directors was increasingly losing faith in Dan Springer. In 1Q23, he resigned from his position with Maggie Wilderotter taking over as an interim CEO.

With proper management in place, I believe DocuSign has a good chance of reaccelerating its growth. However, since there is no clear visibility of a turnaround, I will continue to remain on the sideline, although there are positives to take from its most recent 2Q23 result.

In the previous quarter, DocuSign hired a number of new seasoned executives, including Jim Shaughnessy from Workday (WDAY), a $39 billion market cap company, and Steve Chute from SAP (ETR: SAP), a $103 billion company.

Noticed how most of them came from managing a much larger company, which is a very common playbook in most turnaround situations. While this does not guarantee any future success, I view this very positively as turnaround often requires the right management team to execute. It is also unrealistic to expect any material improvements in the next few quarters considering they have only joined recently. This quarter, they also seem to have hired a new Chief Customer Officer.

Like everyone else, interim CEO Maggie Wilderotter is also a seasoned executive who has held multiple CEO roles in companies like Frontier Communications (FYBR) and AT&T (T), and she is also an existing board member in companies such as Costco (COST).

Despite being 1 to 2 quarters in, the new management team seems to have settled in and started to implement their strategies. According to CEO Wilderotter in the 2Q23 earnings call:

“…we have upgraded talent, launched retention initiatives to include a new employee training program that will commence this month teaching our teams how to operate with excellence. Inhi Suh, our new President of Product has already put in place a clear product roadmap that mapped out releases starting next month. Steve Shute, our new President of go-to-market, has revamped our selling motion and performance expectations for the small, medium business and enterprise segments. Our marketing team is delivering new collateral, messaging and tools for Steve’s teams as well as a simplified digital motion for consumers and one-time users.”

One particular observation that I’ve noticed during the quarter was that, unlike past earnings calls, the management’s commentaries are more directed towards how they intend to navigate the turnaround in the near term and little to no emphasis on its agreement cloud. This signals to me that perhaps, in the coming quarters, more efforts will be placed on addressing investors’ concerns, which I believe shareholders will appreciate more clarity on. This also tells me that collectively, the management is working towards a common goal. That said, this does not change the fact the visibility of a turnaround is low, and it remains to be seen in FY24.

Let’s now head over to access the key metrics I am keeping track of in DocuSign’s 2Q23 results.

This quarter’s result came in above expectations as its revenue grew 21.6% Y/Y compared to its midpoint guidance of $602 million (+17.6% Y/Y growth). However, its full-year revenue guidance of $2.47 to $2.48 billion remains unchanged. Given that its expected 3Q23 revenue is $626 million, this means that 4Q23 revenue is expected to grow at 10% Y/Y. And this marks the 7th consecutive quarter of growth decline.

DocuSign’s total customer count continues to grow strongly as a result of its strong customer acquisitions, which they disclosed to have landed multiple enterprise deals such as Goldman Sachs (GS) and Microsoft (MSFT). Notice the slight dip in new customers added in 2Q23, and this may partially be attributed to the changes made to its go-to-market strategy, although, we have to monitor closely if this is a recurring occurrence. As mentioned earlier, with new leadership at the helm, the market is going to be anticipating a growth resumption, though the question is when.

Nonetheless, this shows that DocuSign continues to take market share, albeit at a slower pace this quarter, with poor sales efficiency – which I will be talking about next.

What is increasingly concerning to me in the past few quarters was that its operating expenses as a proportion of total revenue are not coming down. More particularly, its sales and marketing (S&M) expenses are consistently making up a huge chunk – over 50% – of its revenue despite not showing any growth re-acceleration. Although, if we look at the breakdown of Y/Y growth of each operating expense, the growth has slowed down considerably from FY21, but not quickly enough.

Operating losses and margin have also barely improved during the quarter. However, in 1Q23, the management said that they will be slowing down hiring to prioritize profitability. This is the right move for 2 reasons – (1) the challenging macro calls for the need to focus on profitability, and (2) without proper sales leadership, hiring more sales reps is not going to resolve the sales execution issue. In 4Q22, the management disclosed that they had changed 65% to 70% of their go-to-market team.

Furthermore, during this quarter’s earnings call, CFO Cynthia Gaylor admitted that they were too focused on scaling quickly, resulting in poor operating efficiency. The focus ahead will be on growing prudently to meet its operating margin guidance of 16% to 18%. Hopefully, with the appointment of Steve Chute and the new Chief Customer Officer, the company will see improving growth in FY24.

Former CEO Dan Springer previously also admitted that he was slow in bringing in seasoned leadership, which has slowed down the company’s growth. This also partly explains why the board had little faith in his ability to execute and act quickly.

In the past, DocuSign was too focused on growing that it changed 65% to 70% of its go-to-market team, with no operating efficiency in mind. These implementations under ex-CEO Dan Springer did not materialize which calls for a change in the management team, with numerous seasoned executives announced in the most recent quarters. However, this still begs the question: when will DocuSign’s turnaround begin?

The new management has also taken steps to focus on profitability, even though, these efforts are likely to show up in the next couple of quarters. This shift in focus is a great sign to me as I would prefer the management to grow prudently rather than growing at all costs with no growth re-acceleration to show. As the visibility of a turnaround is not clear for now, I will continue to remain on the sidelines.