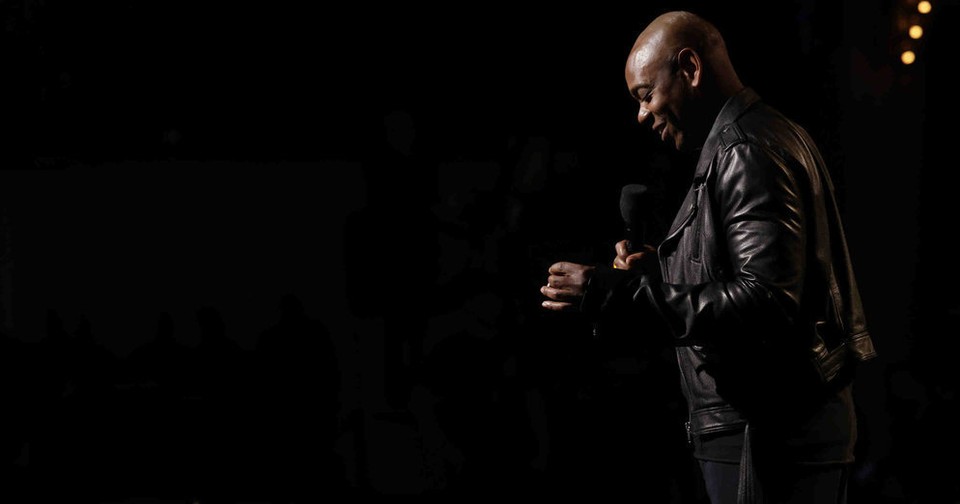 Dave Chappelle’s comedy has always walked a practiced knife-edge; he’s one of America’s most successful and discussed stand-up comedians because he can suck the air out of the room in a second and fill it back up just as quickly. He can have his audience whispering “Did he just say that?” but will then undercut his own provocation with an impish grin. He’s hosted Saturday Night Live three times since 2016, and each time was right after an election, seemingly on producer Lorne Michaels’s assumption that only Chappelle has the daring to really get into America’s political divides live on television. But this time, Chappelle came out roaring on an even more tabloid-y topic: Kanye West, Kyrie Irving, and the wave of Black celebrity anti-Semitism cresting around the country.

Read: Dave Chappelle reckons with himself

“Early in my career, I learned that there are two words in the English language that you should never say in sequence,” Chappelle said in his opening monologue on last night’s SNL. “Those words are the and Jews. I’ve never heard someone do good after they said that.” He then launched into a lacerating summary of Ye’s recent meltdown and the rapid destruction of his reputation. “He had broken the show-business rules, you know, the rules of perception. If they’re Black, then it’s a gang. If they’re Italian, it’s a mob. But if they’re Jewish, it’s a coincidence and you should never speak about it,” Chappelle deadpanned, then offering one of those impish grins.

Chappelle’s ostensible point in his 15-minute monologue was sometimes hard to grasp, as he tiptoed up to the stereotypes Ye perpetuated and then gave them some half-hearted deflation. “I’ve been to Hollywood; this is just what I saw … it’s a lot of Jews. Like, a lot,” Chappelle chuckled. “But that doesn’t mean anything! There’s a lot of Back people in Ferguson, Missouri. Doesn’t mean they run the place!” Ye’s biggest mistake, he kept pointing out, was a PR one: “I can see, if you had some kind of issue … you might go out to Hollywood, and your mind might start connecting some kinds of dots, and you could maybe adopt the delusion that the Jews run show business. It’s not a crazy thing to think. But it’s a crazy thing to say out loud, at a time like this,” he said, turning his back and cackling.

Many of his punch lines were delivered with a jab like that—the notion that the biggest sin Ye and Irving had committed was perhaps speaking some unspoken truth. Yes, Chappelle included some perfunctory acknowledgments that just because Jewish people exist in Hollywood doesn’t mean they run it, but he delivered them clunkily. At one point he offered up that he has numerous Jewish friends, the kind of lazy, vague defense of bad behavior that is rightfully mocked anytime anyone offers it as an apologia for racism. It was cheap enough to make the end of his monologue, when he threw in one last gag about the unspoken “they” running Hollywood, land with a thud.

I value that stand-up comedians exist to try to reckon with society’s most uncomfortable topics, and I’m smart enough to know that a stand-up set is a performance, not a sincere polemic. Chappelle and comics like him are functioning as raging ids onstage, giving humorous voice to dark, sometimes embarrassing topics and thoughts. Yes, I had plenty of nits to pick with his forgiving, one-minute summary of Irving’s recent tumult after promoting an anti-Semitic film and refusing to apologize about it. Irving was not just “slow to apologize” but actively antagonistic when questioned about anti-Semitism. But I also understood that Chappelle was working the audience into enough of an uncomfortable lather so that the punch line “Kyrie Irving’s Black ass was nowhere near the Holocaust … in fact, he’s not even certain it existed” would have extra-outrageous snap and crackle.

But Chappelle’s comedy of late has become almost depressingly obsessed with celebrity and the solemn vagaries of cancellation. “I know the Jewish people have been through terrible things all over the world, but you can’t blame that on Black Americans; you just can’t,” he said, acknowledging that the statement earned him just a single “Woo” from a mostly silent crowd. Any “blame” being assigned to Irving is because of the highly specific circumstances of his behavior online and in front of the press; he is a multimillionaire with a colossal platform, not some avatar for regular people, as Chapelle seemed to argue. But in his recent specials, Chappelle has returned again and again to the supposedly high toll celebrities have had to pay for their public statements, bemoaning Kevin Hart’s loss of an Oscars-hosting gig in two separate specials, and grousing about the backlash that J. K. Rowling has received from the trans community.

Simply put, Chappelle is just far, far less funny or insightful when he’s intervening publicly to address the reputations of well-known multimillionaires. It turns his often-brilliant comedy into depressingly plodding “discourse,” relying more on getting shocked murmurs out of the audience than laughs, and barely bothers to undercut his own self-importance. Chappelle is, of course, rich and famous himself, and it’s often difficult for comedians who are that prominent to still be able to speak to a layperson’s mindset whatsoever. But all of the best material he displayed on SNL was along those lines, as he tried to explain Donald Trump’s enduring appeal to certain pockets of Americans.

“He’s what I call an ‘honest liar,’” Chappelle said of Trump. “I’d never seen a white male billionaire screaming at the top of his lungs, ‘This whole system is rigged!’” He recalled his astonishment at Trump’s braggadocio about tax dodging during one of the 2016 debates, and acidly mocked the broad, recent swing toward anti-establishment thought around the country. “Everything white people are mad about, we’ve been on that,” he said. “Man, we can’t trust the government—we’ve been on that.” That kind of broader cultural interrogation is much more trenchant than him parsing just how offended people should be by the latest anti-Semitic celebrity meltdown.