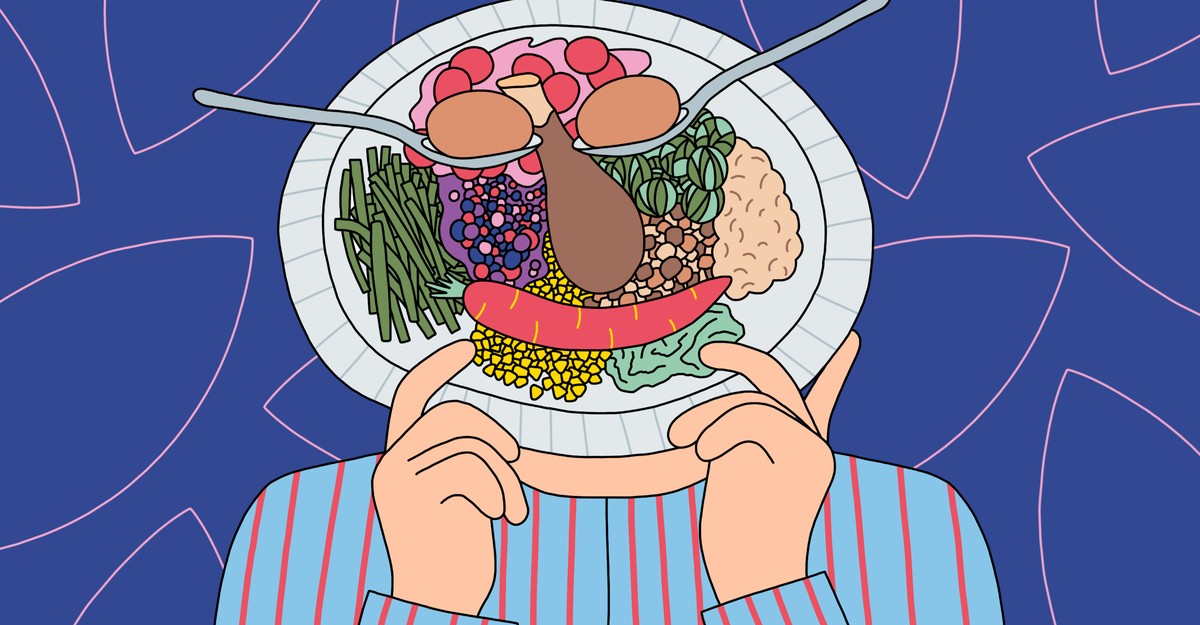 “How to Build a Life” is a weekly column by Arthur Brooks, tackling questions of meaning and happiness. Click here to listen to his podcast series on all things happiness, How to Build a Happy Life.

La Grande Bouffe is a 1973 French Italian dark comedy about a group of four friends who shut themselves up in a villa and eat themselves to death. Although mostly unknown to American audiences, the film is a cult classic in Europe. I learned about it in November 1991 shortly after marrying my Spanish wife. Living in Barcelona at the time, I treated my new in-laws to a full Thanksgiving feast: multiple turkeys, stuffing, mashed potatoes—the works. I even somehow procured pumpkin pies.

“This American holiday,” my wife whispered, as her amazed family surveyed the mountain of food in front of them. “It reminds me of a movie.”

“It’s only once a year,” I responded after hearing the film’s plot. “And it makes us happy, not depressed, like from watching a European film.” She expressed skepticism that most Americans limit their blowout feasts to once a year—which I thought uncharitable, although perhaps fair play, given my remark about European cinema.

Later, however, I began to wonder about the happiness part of the binge. People do love Thanksgiving—it is the average American’s favorite holiday. But does the bouffe really have to be so grande in order to give us a boost? Does overindulgence make us happier than regular indulgence? What if we ate a normal-size meal, instead of the 3,000 to 4,500 calories consumed by the average American during a Thanksgiving feast? For that matter, should we stop overconsuming food at every celebration?

Like many traditional holidays, early Thanksgiving celebrations involved a food binge at a time when many people suffered a calorie deficit, so a large meal was a real treat. My father-in-law, who as a child suffered through the Spanish Civil War and the deprivation that followed, spoke with nostalgia about holiday meals when, one day in the year, he didn’t go to bed hungry.

For most people, relief from hunger is no longer the source of Thanksgiving enjoyment. However, eating is still pleasurable, especially when it is social. Research shows that eating with another person can make food taste better, and eating with friends or family who eat a lot makes us overindulge. It might even be fun to binge together: There is research linking social drinking to the point of drunkenness (dubbed “calculated hedonism” by the investigators) to positive enjoyment, so it is easy to imagine the same kind of fun coming from other types of joint disinhibition—even a turkey bender. So in the short run, it seems that, yes, overindulgence can make you happy, especially if you do it with loved ones. (Although the stomachache that follows may dampen your spirits.)

Read: How therapy can cure overeating

But what about the long run? On the plus side are our memories, which elevate the evanescent pleasure of the meal to the longer-term reward of enjoyment. On the negative side, for many, is the weight gain from the Thanksgiving feast (as well as from the holiday meals that follow in the subsequent month). One study from 2000 found that, on average, Americans gain almost one pound between Thanksgiving and New Year’s. This gain, the researchers concluded, is generally not reversed during the spring and summer, meaning the annual calorie surplus could lead to weight increase over adulthood.

This is not a health column, so I won’t adjudicate questions in that category. But what about the happiness effects from that weight gain? ​​If you listen to the dieting industry or pay attention to a lot of fitness influencers on social media, you have likely internalized the message that any weight gain is bad for your happiness, and that if you avoid putting on pounds (or work them off afterward), you’ll be a lot happier, presumably because you will be more attractive.

But the data simply don’t support this idea. For example, a mid-2000s Organization for Economic Cooperation and Development survey of 23,000 Dutch citizens concluded that although most happy people do not have obesity, “people who are moderately overweight are equally happy and satisfied with their life compared to people who are not overweight.” In other words, a few extra pounds probably won’t lower your well-being.

But worrying a lot about those extra pounds might lower your happiness. There is evidence that excessive attention to weight can lead to increased stress, and that inordinate worry about a healthy diet can trend into a harmful nutrition obsession called orthorexia. Meanwhile, although moderate exercise is excellent for improving mental health, too much (which some researchers classify as more than five times a week) may be linked to increased stress, depression, and emotional problems. This is correlation, not causation, so I think there’s a good case to be made that it isn’t the week’s sixth or seventh workout that’s causing the problems, but the inability to take a day off.

None of this is to say that weight gain above normal levels is always good or that weight loss through diet and exercise is always bad. There are times in life when we need to cut back and correct ourselves. My point is that people are happiest when they live with balance. Excess consumption can be a source of suffering. But intense abstemiousness—as in saying no to a Thanksgiving feast—can be a form of excess as well.

Altogether, the evidence suggests that if eating gives you pleasure and you are with your loved ones, a Thanksgiving bouffe can indeed bring you joy and, if you keep it within proper boundaries, not bring suffering later on. Here are a few things to avoid.

1. Don’t extend your feast past Thursday.

The kind of weight gain that might lower your life quality would come from disinhibition all year round, not from one fun day. Go ahead and have seconds and thirds on Thursday, but don’t start Friday morning with waffles and ice cream. Go back to normal eating, and maybe add in a long walk for good measure.

2. Don’t forget the Thanks part.

Gratitude can have a lot of positive effects, including increasing life satisfaction and lowering depression and anxiety. It can also moderate overeating, according to a 2015 paper in the journal Integrative Medicine. The idea is to be mindful of each bite—even if you take 10,000 of them—and to enjoy it deliberately. And if you can really be mindful of not just the food, but also the atmosphere and the company, you will lay down the foundation for a rich memory—which can bring the lasting enjoyment that is a genuine source of happiness.

How to Build a Life: How to be thankful when you don’t feel thankful

One last thing to keep in mind even if you do overeat on Thanksgiving: Feeling guilty won’t help you recover, and it will make your holiday a lot less enjoyable. Researchers writing in 2014 in the journal Appetite looked at people’s attitudes about delicious food (chocolate cake) and then followed their eating and weight patterns over an 18-month period. They found that guilt about eating the cake—versus associating it with celebration—was correlated not with more positive attitudes about healthy eating, but with lower levels of perceived control over eating and less success at maintaining weight. Guilt about eating will not make you better off, but it will make you appreciate Thanksgiving less. So whatever you do, be sure to celebrate and enjoy.