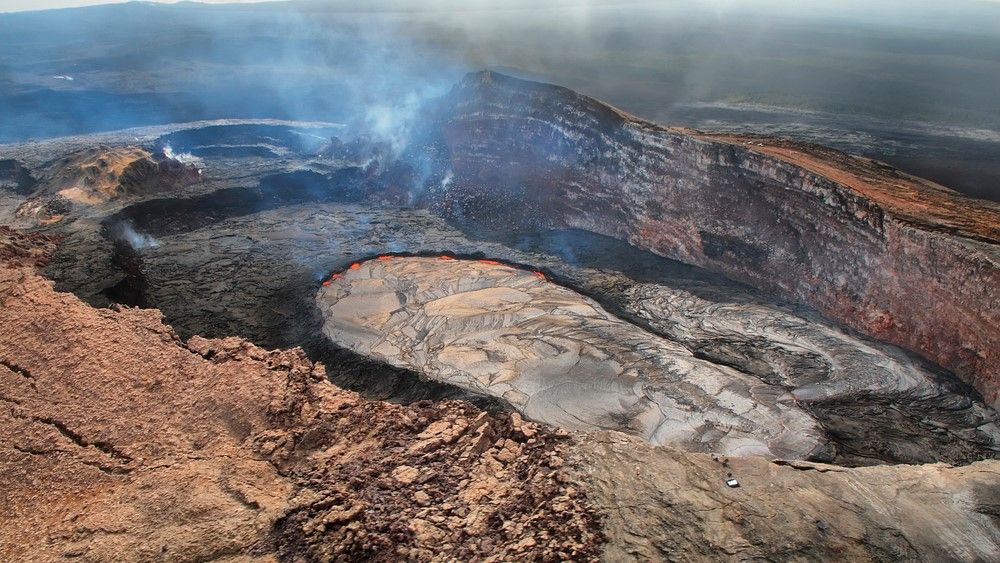 Kilauea volcano gave scientists and local Hawaiians a scare this week, when a swarm of more than 140 earthquakes in just 12 hours prompted authorities to  raise the alarm over a possible imminent eruption.

But now, Kilauea’s brief rumble is over; the volcano did not erupt and is barely registering any earthquakes, the U.S. Geological Survey (USGS) reported on Thursday (Aug. 26).

The earthquakes were tiny; most registered at below magnitude 1.0, with the most violent reaching magnitude 3.3. The tectonic activity also coincided with a shift in the ground formation to the west of the swarm, which the USGS said “may indicate an intrusion of magma occurring about 0.6 to 1.2 miles (1 to 2 kilometers) beneath the south caldera.”

Related: The 10 biggest earthquakes in history

As a result, the USGS raised the alert level for Kilauea from advisory/yellow to watch/orange, meaning an eruption was possible but not immediately imminent. Throughout the ordeal, there was no evidence of lava at the surface of the caldera — a large depression formed at the summit of the volcano, which was created by a previous eruption. Moreover, scientists did not detect any unusual activity at either of the volcano’s two rift zones — a set of linear cracks on the sides of vents that are a common feature of shield volcanoes — to the east and southwest, according to the National Park Service (NPS). Levels of sulfur dioxide and hydrogen sulfide, two toxic gases produced during eruptions, also remained low, according to the NPS.

Scientists and local residents were able to breathe a sigh of relief on Thursday, when the USGS downgraded the alert level to Advisory/Yellow. This was in response to diminished earthquake and ground deformation activity, which is indicative of magma movement underground.

“Within the past 24 hours, only 10 earthquakes have been detected in this area,” the USGS said in a statement released Thursday. “These observations indicate that the immediate potential for an eruption is diminished at this time.”

Kilauea, which is a shield volcano located on the Big Island of Hawaii, is one of the most active volcanoes on Earth. Like other shield-shaped volcanoes, it formed over hundreds of thousands of years as runny lava erupted and flowed down its gradual slopes. It has erupted 34 times since 1952, including for 35 years continuously at a single vent between 1983 and 2018, according to the Associated Press. The most recent eruption began Dec. 20, 2020, and ended May 23, 2021. Kilauea had been quiet since May, according to the USGS.

However, earthquake swarms like the one just detected have preceded major eruptions in recent years. More than 600 earthquakes were recorded at Kilauea, including more powerful quakes of magnitude 5.0, before a massive eruption on May 3, 2018, that destroyed residential homes and roads in the nearby Puna district, Live Science previously reported. Prior to that eruption, geologists also noticed an intrusion of magma by the volcano. But even then, scientists weren’t sure whether it would erupt.

“That’s the million-dollar question,” Janet Babb, a geologist and Hawaiian Volcano Observatory spokesperson, told Live Science in 2018. “Magma can intrude in an area and never reach the surface. But an intrusion of magma can also result in an eruption.”

Increased earthquake activity was also recorded before the start of the most recent eruption, Live Science previously reported.