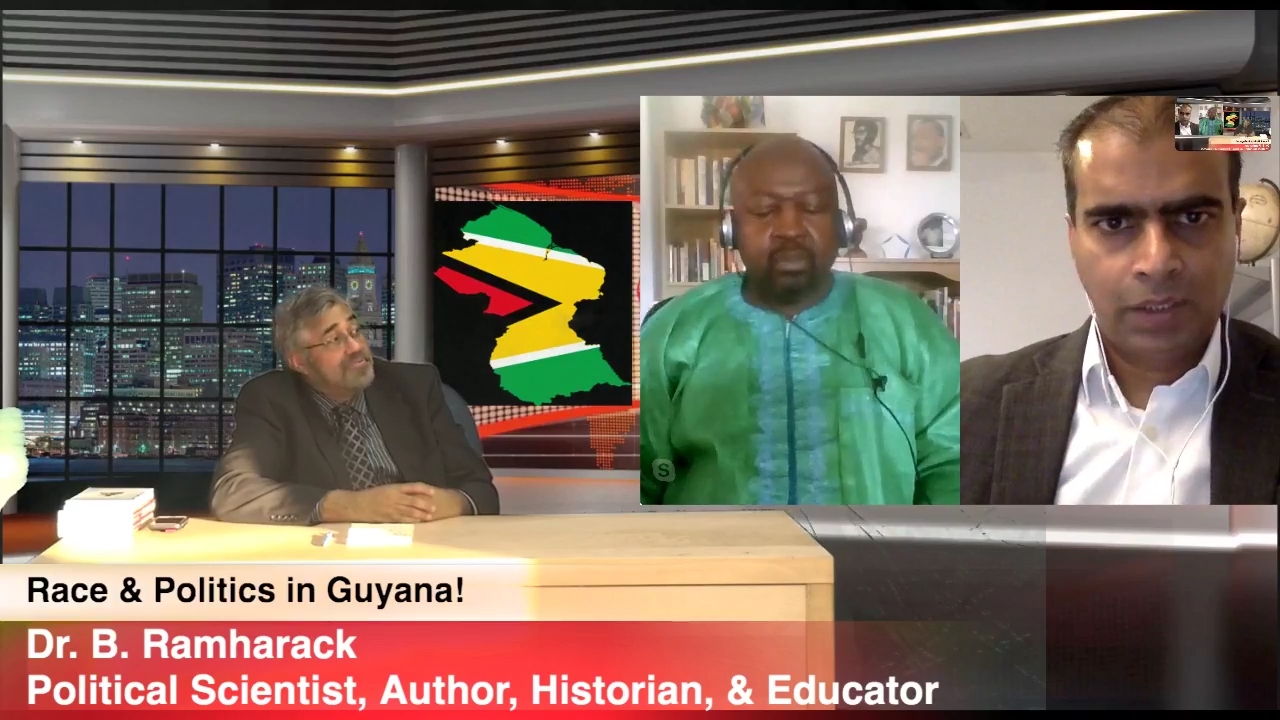 However, former President Donald Ramotar of the People’s Progressive Party said Guyana has more of a class rather than a race problem and he instead accused the People’s National Congress Reform (PNCR) of peddling the claim that Indo-Guyanese are richer than their Afro-Guyanese counterparts.

Political Science professors, David Hinds of the Working People’s Alliance (WPA), and Baytoram Ramharack who is associated with the pro-Indo Guyanese Rise Organise and Rebuild (ROAR) political party, and Ramotar Friday night discussed the topic “Race and Politics in Guyana” at an online town-hall meeting in Queens, New York.

Hinds said the WPA played a major role in having the governing Coalition promise that ethnic impact statements would be conducted “but the government has not implemented it”. “Where the politicians are culpable because often they have the power to implement policies that could change and tone down the ethnic problems that we have in the country and they don’t do it,” he added. A Partnership for National Unity+ Alliance For Change (APNU+AFC) coalition promised in its 2015 manifesto to reform and empower the Ethnic Relations Commission to provide Ethnic Impact Statements of Cabinet Decisions and Government departments, where necessary, and such findings will be acted upon in the best interest of all Guyanese.

Ramharack called for ethnic impact statements on policies, saying that such a system should be enshrined in a further reformed Guyana constitution. The coalition has not made much progress in the area of constitutional reform since it was elected three years ago on a platform of promises that had included the establishment of a constitutional reform commission by September 2015.

Professor Ramharack said ethnic impact statements would address the “misguided perception” in Guyana and Trinidad and Tobago that East Indians are generally wealthy. “There are quite a few rich Indians obviously in these countries but there are a lot of Indians who are also very poor, who live on the outskirts of Guyana so would we see a few Indians who are very wealthy? The perception is that most Indians are wealthy so if we are going to call on the government to address these issues, it goes back to what we have said before, this whole notion of having an ethnic impact statement,” he said.

Former President Ramotar disagreed on the grounds that Guyana’s problem is more about class than race, and that race has been historically manipulated by British colonisers by using the the People’s National Congress (PNC) as a tool. He acknowledged that most businesses in Guyana are owned by Indo-Guyanese but at the same time he contended that the “vast majority” of Indo-Guyanese are no better off than the vast majority of Afro-Guyanese.

“I think both gentlemen are missing the mark. The racial question in our country is covering up a bigger issue which relates to a question of class and that is one of the biggest disguise in our country because if you look at our country fundamentally, the two major race groups in our country do not have a great amount of differences,” Ramotar said.

He proposed that both races see themselves first as Guyanese and then as Africans or Indians. Stating that the PPP has always been pushing for national unity, Ramotar challenged Professors Hinds and Ramharack to point to any legitimate reason that Indo- and Afro-Guyanese should not vote for the PPP. “The African workers are going against their own interest when they don’t support the PPP because of the whole question of division that was engineered by the British using the PNC to do that,” said Ramotar who was president of a minority government from 2011 to 2015. Neither Hinds nor Ramharack offered a reason.

Professor Hinds argued that over the last 30 years the “lopsided” accumulation of wealth gap by Indo-Guyanese has widened the wealth gap and the entrepreneurial class has developed unevenly resulting in worsened ethnic tensions. “He talked about a handful of rich people. That’s not true. There is a new Guyanese middle class. Part of the wealth came from drugs and other illicit engagement, illicit trading and so on. But there is a new low middle class in Guyana that has also dominated Indian-Guyanese so you have African-Guyanese who are teachers for the most part, civil servants. They earn less than their Indian counterparts who are in business and so even at the level of the low middle class we have the disparity and that thing is dangerous. We have got to stop it by implementing policies that can bring about economic equality,” said Hinds, a long-time pro-Black and national unity activist.

Hinds cautioned that “a handful of people have now emerged (as) a powerful player in the political economy”. “They act as class within the political economy and class cannot be disentangled from race and ethnicity in all the situations and so the fact that group functions in a particular manner, it has consequences for employment, it has consequences for wealth,” he added.

Hinds further reasoned that the disproportionate accumulation of wealth by the East Indian elite is seen by “the masses as wealth of Indian people” and so policies are needed to address the imbalance. “That drives the kind of prejudices that we see within the African-Guyanese community and so therefore that disproportion of wealth has to be addressed and addressed by a level of policy. We have to have policies that are going to bring about economic equality. It’s not about taking away East Indian wealth. I am not for that. But it’s about looking at the disparities and dealing with them at the structural level,” he added.

Hinds, whose WPA is an affiliate of the governing coalition, recommended that education and culture be used as a major pillar for multiracial and multi-ethnic understanding and appreciation of each other while preserving one’s identity. “It has to start inside of the groups. You’ve got to educate Africans that you are a proud people, that you have been in bondage, that you have a narrative of suffering but also you live in a multi-ethnic society in which you have got to allow space for other ethnic groups and you have got to use your unique experience not to cut you off from a broader experience but to integrate you into a larger experience and I think we need to do the same within the East Indian community, within the Amerindian community and I think our problem is that we neglect that kind of work,” he said.

At the heart of the problem, Hinds said, is that Afro-Guyanese have emerged out of 300 years of slavery while Indo-Guyanese had never been regarded as property and now the two groups have been locked into competition for ethnic, political and cultural resources.

Ramharack said while the coalition came to power with good expectations, eventually the crisis in Guyana continued with the retrenchment of mostly 7,000 Indo-Guyanese from the sugar industry while Afro-Guyanese in several communities were being provided with support through international financing.

“We are not denying that class or class conflict is an issue in Guyana. We know it exists. We know there are rich Indians, there are poor Indians. There are rich Blacks, there are poor Blacks and so on. What we are saying, and I think this is the point that has to be emphasised here, is that race and class interact side by side,” he added.