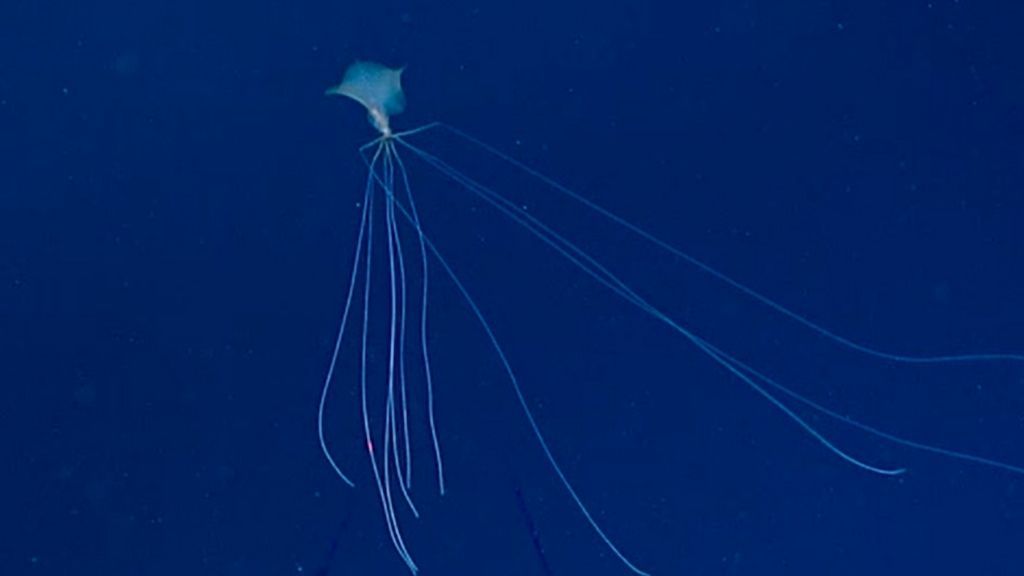 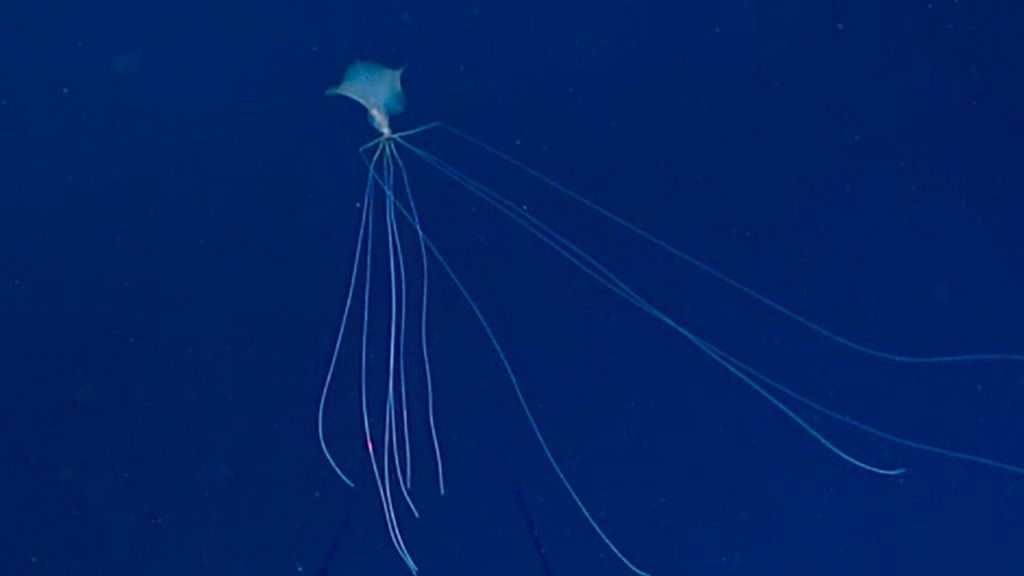 A ghostly squid with huge, iridescent fins and funky, elbow-like bends in its tentacles is rarely seen, but scientists recently captured stunning footage of the elusive animal during an expedition in the Gulf of Mexico.

To date, there have been fewer than 20 confirmed sightings of this deep-sea cephalopod, known as a bigfin squid (Magnapinna), and this recent sighting adds one more to the list, according to a statement from NOAA Ocean Exploration.

National Oceanic and Atmospheric Administration (NOAA) scientists spotted the elusive squid on their recent “Windows to the Deep 2021: Southeast ROV and Mapping expedition,” during which the team explored poorly understood deepwater areas in the western Atlantic Ocean off the southeastern United States. While filming underwater near the West Florida Escarpment — a steep slope in the seafloor that separates the shallow, coastal waters from the deep Gulf of Mexico — the team noticed a set of spindly blue appendages drifting past their remotely operated vehicle (ROV).

In the footage, the camera turns to reveal the bigfin squid in all its glory, its eight arms and two tentacles strewn out behind it. The creature’s large fins — which extend off the main portion of its body, called the mantle — ripple softly in the water, similar to how a stingray’s fins flap. The see-through mantle holds the squid’s organs, which appear light yellow and pink in the light of the ROV.

Mike Vecchione, a research zoologist with the NOAA Fisheries National Systematics Laboratory and the Smithsonian’s National Museum of Natural History, was onshore watching the ROV footage on a satellite feed as the bigfin squid came into view. He and Richard E. Young of the University of Hawaii first described the bigfin squid family, called Magnapinnidae, in 1998, according to a report in the South African Journal of Marine Science. Since then, three species of bigfin squid have been described, but there may be more bigfin squid species to discover, according to the NOAA statement.

When the bigfin squid popped up on the ROV feed, Vecchione quickly called the vehicle operators, to share his knowledge of the animal, the statement says. “Magnapinna … all of their arms and tentacles have this extension on them, long, spaghetti-like extension,” Vecchione can be heard saying in the NOAA video footage. “It’s really difficult to tell the arms from the tentacles, which is very unusual for a squid.” The bigfin squid holds all these appendages out from its body, creating those distinctive elbow-like dents that make its tentacles so recognizable.

The squid was seen swimming about 7,825 feet (2,385 meters) beneath the ocean surface, but in the past, bigfin squid have been spotted as deep as 15,535 feet (4,735 m) down, according to the statement. Members of the bigfin family are widely distributed throughout the world’s deep ocean ecosystems, but it’s unclear how many there are in total since the cephalopods are seen so rarely. Last year, scientists reported seeing five of the squid near the Great Australian Bight, a large bay in South Australia — the first time any bigfin squid had been spotted in Australian waters, Live Science previously reported.