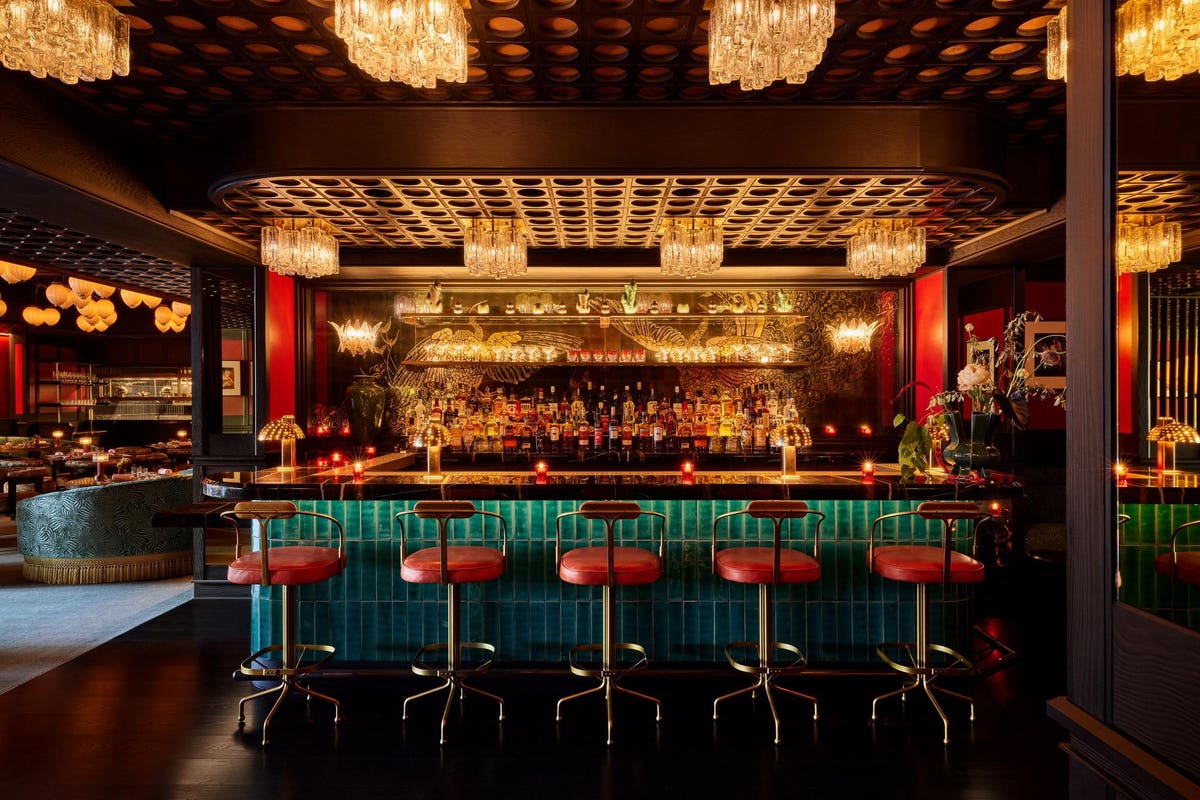 The first thing you see when you enter The Tin Building, Jean-Georges Vongerichten’s 53,000 square foot marketplace and restaurant cluster, is the counter of sparkling fresh fish on ice. It’s intentional, an homage to this building’s original past in New York’s Seaport District as part of the longtime home of the Fulton Fish Market. But it is, literally, just a hint of what’s available at this bilevel, culinary showplace of top-of-the-line food retail and 12 restaurants all designed by the chef that was reportedly eight years and $194.6 million in the making.

The design by Roman and Williams Buildings and Interiors is striking with markedly different settings for the restaurants’ different international cuisines. (Also a fish ceiling installation that when viewed from a distance takes the shape of a whale.) The sheer number of items on display is also pretty dizzying but the forces behind it say the volume isn’t the point (even if chocolate bars in brilliant wrappings do cover several walls): obsessive curation is, presenting the absolute best of what’s available on the market along with esoteric discoveries such as the company Fat Toad Farm’s riffs on caramel (with spicy dark chocolate, cold brew coffee, salted bourbon, etc.) Counters and shelves on the main floor display prime meats, an international and, again, highly curated array of international cheeses, gorgeous, colorful salads and prepared foods, crusty breads and pastries, gelato and artisan fruits and vegetables.

Upstairs on the second floor in the two Mercantile sections are the shelf products, one Western with shelves of jams, honey, olive oils, vinegars, pasta, a spread of condiments including the Fat Toad caramels and one type of mayonnaise, Duke’s that is worshipped by Southerners but pretty much unknown up here. The other section Mercantile East reflects Vongerichten’s relationship with Asian cuisine and displays 500 products from chili oils and South Korean vinegars to laksa spice kits and bamboo salt.

The restaurants mixed in between those spaces split between fine dining and fast casual. On the main floor, T. Brasserie, which includes a few outdoor tables, spotlights brasserie classics such as onion soup and moules frites (both delicious) on a limited menu set to expand when the building opens in extended hours next month. (It’s now currently open from 12-5 PM Thursdays-Sundays) Nearby, a multinational griddle station turns out crepes and dosas. Across the floor are a wine bar with 20 wines by the glass (and that you can take with you as you browse the rest of the building courtesy of the building’s stadium license), Fulton Fish Co., a raw bar for plateaux of shellfish, Shikku, a sushi bar, Double Yolk for egg dishes (and, apparently, next level home fries) and T.Cafe for coffee and morning pastries. Bordering the Mercantile sections on the second floor are The Frenchman’s Dough for pizza and pasta, Seeds& Weeds for plant-based dishes, a bar with 24 beers on tap and Taquito for tacos. The Chinese restaurant The House of the Red Pearl is not in plain sight: it’s tucked away behind a velvet drape in the back of Mercantile East: look for the illuminated fan over the doorway. During this preview period, it’s open during the day but once regular hours set in, the sexy Chinois setting will only be open at night, most likely until late night, drawing diners into the neighborhood.

In another neighborhood, the Waterline Square development in the far West 60’s near Lincoln Center, Harry’s Table by Cipriani also enhanced the culinary scene when it opened in June. As a product of the Italian hospitality company, it showcases their products along with other ingredients such as top-quality meats, cheeses, fish, fruits and vegetables, breads and pastries. There are also cafes sprinkled through the selling floor: a Milanese style espresso bar at one end; one creating panini; a counter serving exceptional wood-fired pizzas in the middle, another serving pasta. At the other end with indoor and outdoor tables is the restaurant Bellini named for the peach nectar and Prosecco invention from Harry’s Bar in Venice. Ordering one is essential-it’s luscious—as well as another Harry’s Bar staple, beef carpaccio along with pastas such as tagliolini with red shrimp, zucchini and cherry tomatoes and an extremely refined lasagna Bolognese. And on the way out, pick up a croissant with Nutella to take home for the morning.