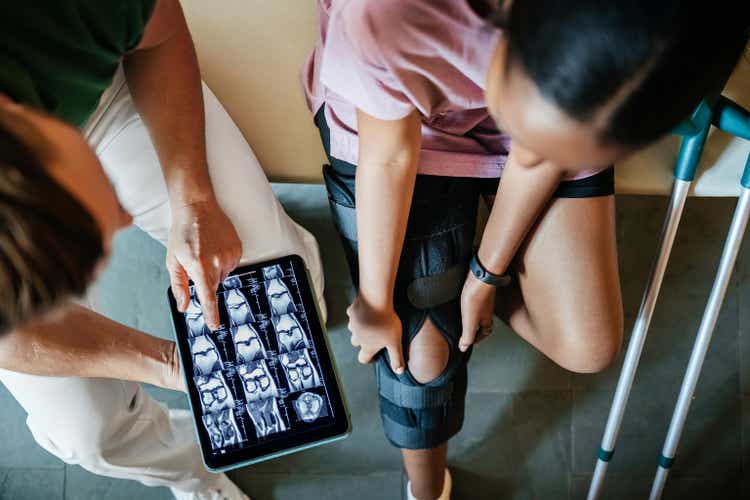 There’s no definitive rule about what works in med-tech, but companies that combine good-but-not-great revenue growth (below the double-digits) and good-but-not-great EBITDA margins (below the mid-20%’s) can often drift in a sort of valuation no man’s land where the shares can struggle to rerate meaningfully higher. That may be at least part of what’s hurting the share price performance of Enovis (NYSE:ENOV), as the company is an odd mix of business segments with varying growth prospects.

I wasn’t overly fond of Enovis at the time of the Enovis-ESAB (ESAB) separation, and the 20% or so drop in the share price since then hasn’t made me regret that position. I have been impressed with the performance of the Reconstructive business, but I continue to believe that management’s expectations and targets for the Prevention & Recovery business, and the business as a whole, could still be too high. What’s more, I think the lack of “pure-play” leverage to more attractive growth markets could make the stock a harder sell with institutional investors.

Although Enovis didn’t do much better than the Street expected for the third quarter, and management did take down guidance a bit, I don’t think it was a bad quarter altogether.

Revenue rose 7% in organic terms, which honestly isn’t too bad relative to the company’s served markets. Prevention & Recovery grew almost 4%, comfortably above the 2% growth reported by Össur (OSSR.CO) (a meaningful rival in the bracing/support business). The Reconstructive business grew 15%, a strong result compared to other companies in the ortho space.

Management had been guiding for 6% to 9% organic revenue growth in 2022, but revised that down a bit to 6.5% growth, while also pushing out the 20% EBITDA margin target to some unspecified point beyond 2024.

Good Pricing In P&R And Strong Share Gains In Ortho

Helping to drive the nearly 4% growth in the Prevention & Recovery segment was pricing leverage of around two points. While that may not sound like much at a time when some industrials are pushing through double-digit price increases, the reality is that it’s often difficult to get any meaningful pricing leverage in med-tech, where annual price erosion is more the norm. The sub-2% implied volume growth is a little disappointing in the context of recovering procedure counts, but relatively healthy pricing does speak to some brand leverage in the business (which is good).

The Reconstructive business was considerably more impressive to me. Management reported 17% growth in the U.S. hip and knee businesses, and that’s a growth rate almost double that of the major joint market for the third quarter (with Stryker (SYK) leading the way among the majors with 13% growth). While it’s harder to gauge the relative performance of the extremities business, as most of the major players don’t break out the performance of their units, I believe the 17% growth that Enovis claimed for the quarter would likewise be roughly double the market growth rate in the quarter.

Enovis is still a tiny player in the major joint market, with something around 2% share, but the company is following through on leveraging product innovation to drive share growth. The EMPOWR3D is a good knee product and has been gaining share for several years now, and also helping facilitate the company’s strategy of growing its business with ambulatory centers (where more and more knee procedures are being done, especially for younger, healthier patients).

I’m eager to see what the company can do with the augmented reality technology it acquired with the Insight Medical deal earlier this year. Insight Medical created Arvis, a headset-based augmented reality navigation tool for orthopedic procedures (including total knee and total hip procedures) that enables improved alignment and placement in joint replacement procedures. While I’m not suggesting that Arvis is just as good as a robotic system (like Stryker’s Mako), tools that lead to improved alignment and placement usually lead to improved outcomes, and hospitals will pay for that (particularly if there isn’t a huge capital spending component), and I think Arvis could be an invaluable tool to help build Enovis’s presence in the major joint market.

I’m still skeptical that Enovis can hit the targets that management has laid out in the past. I think mid-single-digit growth in Prevention & Recovery is a tough goal given the underlying fundamentals of the served markets, but Enovis is showing some pricing leverage which I think speaks well to perceived brand value. Still, this is a tough market in which to drive growth through innovation (to some extent, “braces are braces”) and I think it will be difficult to achieve compelling growth and margins in this business.

I’ve been more impressed with the Reconstructive business, and I think this is definitely a segment that can be augmented over time with tuck-in deals. I still believe competing in the major joint recon market is a tough row to hoe (particularly with Globus (GMED) preparing to enter the market), but there are still attractive opportunities in extremities and Enovis has clearly shown here of late that it can outperform in the U.S. major joint market.

I’m looking for around 7% to 8% revenue growth from Enovis over the next three to five years, slowing to around 6% to 7% over the longer term. Again, I’m skeptical about how much growth Envois can wring from the bracing/support, electrotherapy, bone stim, and diabetes footcare markets, but the Reconstructive business has been performing well and Envois may be able to grab more share from less innovative/responsive companies like Smith & Nephew (SNN).

On the topic of margins, I think it’ll be hard for Enovis to get to 20% in the next four or five years. Stronger growth in the higher-margin Reconstructive business helps, but I think a quick move to 20% (from around 15% this year) is a big ask considering the impact of input cost inflation and the need to support ongoing R&D and sales efforts to grow the Reconstructive business. I do think that free cash flow margins can move into the high single-digits over the next several years and then into the low double-digits, driving low double-digit FCF growth.

Valuation is curious. The shares seem priced for a high single-digit total annualized return on a discounted cash flow basis, and that’s actually not bad for a smaller med-tech. Things are trickier with my growth and margin-based EV/revenue approach. If Enovis had double-digit revenue growth, a 3x to 4x multiple wouldn’t be hard to argue for, and likewise if the EBITDA margins where in the mid-20%’s. As is, a 1.75x to 2.2x multiple would be appropriate, giving me a wide range of fair values from $51 to $64.50 on my FY’23 revenue estimate.

I remain concerned that Enovis doesn’t have enough growth to attract the typical growth med-tech investor, nor strong enough margins for the more value/quality-oriented crowd. With that, I fear that the shares could continue to drift in a sort of no man’s land where the stock trades below what would otherwise appear to be fair value simply because there isn’t a good core investor base for the stock. At worst, though, I think the stock is no worse than fairly priced, and if management can execute on its promises, there’s definitely upside potential from here.