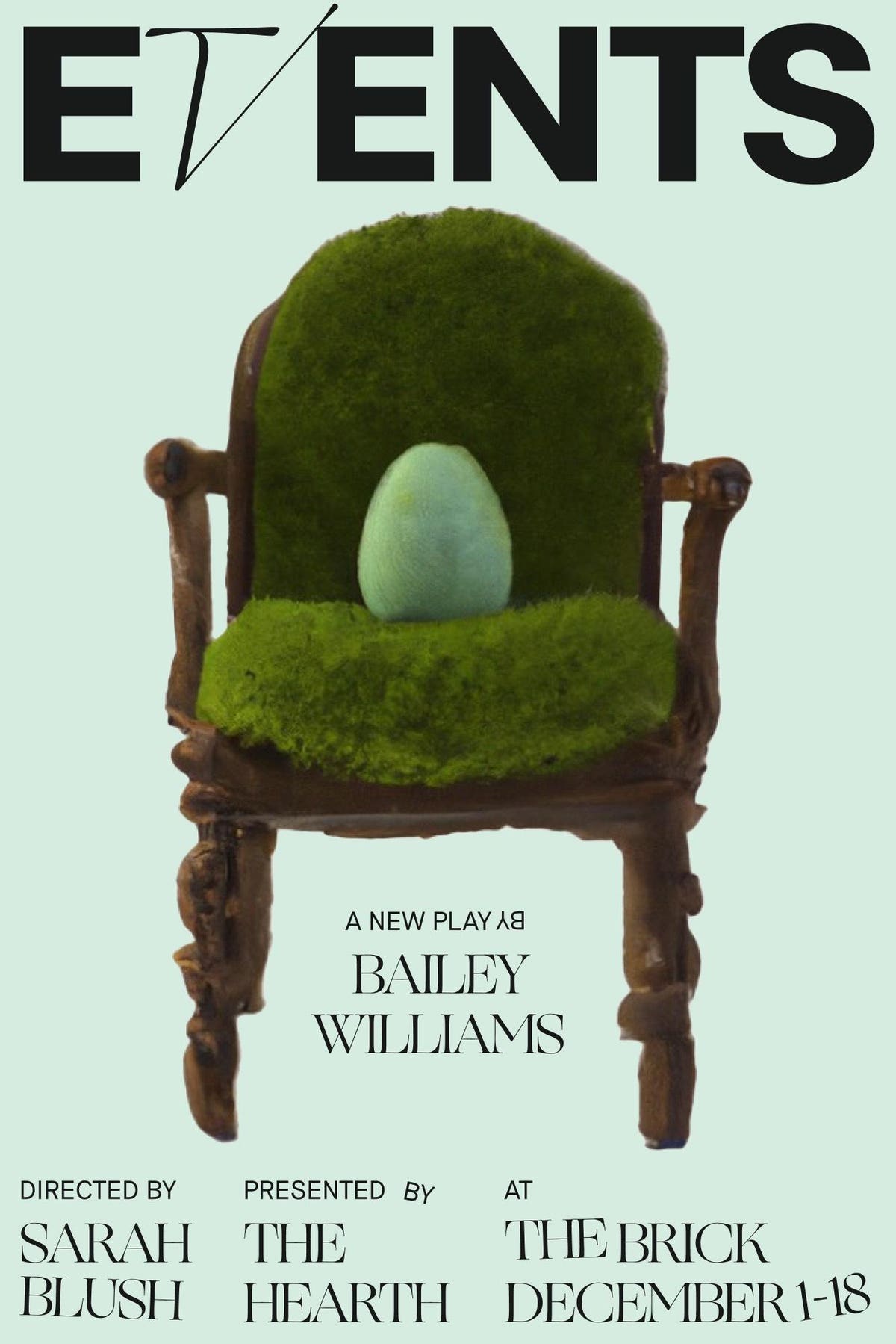 Events, a new play by Bailey Williams, will have its world premiere at The Brick in New York City from December 1st through the 18th. The play is directed by Sarah Blush and presented by The Hearth, starring Brian Bock, Claire Siebers, Julia Greer, Zuzanna Szadkowski, Derek Smith, Dee Beasnael, and Haley Wong.

The play challenges the idea of productivity culture and investigates the power of grief – alternating between “wild hilarity and quiet devastation.” Williams wrote Events at the height of the pandemic after the sudden loss of a friend.

Forbes spoke to Williams about finally returning to live performance. We also spoke about how she went about creating Events and the collaborative process between her and director Sarah Blush.

Risa Sarachan: You wrote Events during the pandemic. What about that time influenced your process?

Bailey Williams: When I started writing Events in the winter/spring of 2020, I was thinking a lot about work. The rhythm of my employment had been grueling before the pandemic, with various stints at events companies and punishing freelance producing jobs, and I was reflecting on what modern employment required. This is nothing others haven’t talked about more eloquently, but jobs want a lot from you nowadays. They want your time, your sense of well-being, and your identity. They want you to be your job.

The pandemic was disrupting that. People were questioning the role of work in their lives and what they had abandoned for a system that gave up nothing in exchange for their everything. And I was writing my little play!

Then one of my best friends died. He died suddenly and horribly, and I was, as you can imagine, deeply distraught. But I had to write my little play about work! I kept trying to write my little play about work, and my grief over my friend kept distracting me. I would sit down to write and my grief would pour out of me, and then I would get annoyed with myself for losing focus.

Then one day, I realized that this was the point, and in fact, the structure of the play. The play is about what we shove to the side for the sake of our jobs and how in order to be efficient, we often have to be less human. I was guilty of the very thing I was critiquing. But grief always invades. You can only ignore it for so long. It seeps into the cracks.

That’s also one of the lessons of the pandemic, if we can call something a lesson if it hasn’t been learned. The cracks will always show themselves!

Sarachan: How did your collaboration with The Hearth Theater Company and Sarah Blush come about?

Williams: I met Sarah Blush during an early developmental reading of what would be our first play together, I thought I would die but I didn’t (which premiered at the Tank in 2019). The play was a total mess at the time, but Sarah understood what I was trying to do. She said the only smart thing I’d heard about the play, which was that it was about trust and what it means to trust a narrative. Then I saw her company’s hilarious and strange play, Sehnsucht, at Jack in 2018, and I was like, okay, I can also trust her. We’ve worked together ever since.

The Hearth commissioned this play in March 2020 based on ten pages I sent them set in the office of an events production and design company. When theater started coming back in the fall of 2021, we had an initial conversation about if we could bear the financial and emotional risk of producing the thing. Everyone was sane and game enough to make it feel like a good idea, so we did.

Sarachan: What were you interested in investigating with Events?

Williams: I am interested in how our jobs become intertwined with our identities. How we change for our jobs? What do we sacrifice for them? I am interested in what the office can and cannot accommodate in terms of our humanity. We seem to have more structures in place to support those not in power, but I wonder if any structure enacted by a company could ever truly prioritize the health of a worker over the health of a company. I am interested in jargon and how words become meaningless and/or meaningful. I am interested in grief. How people express grief, how they suppress it and how it shows up every day in some way. I am also, always, interested in truth and narrative, who we believe and who we don’t believe, as well as humor and stupidity.

Williams: Total dream. Sarah and I really pride ourselves on having fun rehearsals. We are committed to theater as fun, especially while working on a play that is highly critical of certain work environments. We try to make each other laugh as much as possible and create an open environment for collaboration. I love to work with actors. Most of the characters change during rehearsal because I try to write towards the person in front of me.

Sarachan: How does it feel to finally return to live theater?

Williams: It feels extremely groovy. I love theater. I hate my screen. The screen is my enemy. I missed being in places with people terribly.

Sarachan: What do you hope audience members come away with after seeing Events?

Williams: I am typically against trying to curate or concoct a final message for the audiences but I wouldn’t be unhappy if, say, after seeing Events, someone had questions about what they are doing for their job and what their job is doing for them. I would be similarly not unhappy if someone was thinking about someone they had lost. Mostly, however, I hope audience members laugh. If the play does nothing else, I want people to enjoy themselves enough not to clock watch or fall asleep. This is my big dream. It’s harder than you think!

This interview has been edited and condensed for clarity.

Tickets for Events can be purchased here.