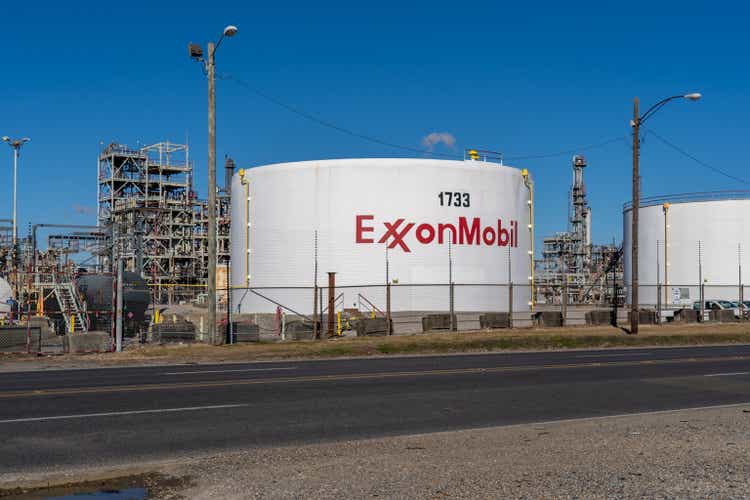 Exxon Mobil Corporation (NYSE:XOM) stock has struggled for upward momentum since we updated investors to exercise extreme caution in a pre-earnings piece.

OPEC+’s decision to hold its output steady in last weekend’s meeting has likely been priced in as WTI crude (CL1:COM) held its $75 support level heading into the meeting.

The market’s attention has justifiably returned to whether the Fed could be compelled to raise its terminal rate higher than the market had anticipated. There are also risks that the Fed could keep its terminal rate at a more restrictive level for longer than what the market has priced in. As such, both instances are not constructive for energy stocks, as our analysis suggests that they have not been priced sufficiently for a downturn in underlying energy markets.

The bifurcation between energy leaders like Exxon and the underlying market suggests further caution. Moreover, optimistic analysts’ projections relative to the S&P 500’s forecasts also raise the specter of more significant earnings compression risks that may not have been reflected.

Therefore, XOM investors are urged to remain cautious and not fall into the trap of thinking its valuation is at very low levels. We believe the market remains cautious over the cyclical nature of the underlying markets, despite the structural challenges affecting demand/supply dynamics.

XOM’s price action indicates that buyers have failed to regain sufficient momentum to sustain its recent highs, as sellers have likely regained the initiative to force a steeper selloff.

Analysts Seem Overly Optimistic Over Exxon And Its Peers

Industry analysts have lowered their optimism over the past month as upward earnings estimates revisions have moderated. However, as seen above, analysts remain sanguine that Exxon and its peers should emerge relatively strongly despite worsening macro headwinds.

As such, we believe the downside earnings compressions risks could increase if the market anticipates further weakness in the economy, behooving further demand normalization.

The bifurcation between Exxon and its peers relative to the S&P 500’s (SPX) (SP500) earnings revisions couldn’t have been more glaring. The market’s earnings forecasts have continued to be revised downward through November and even accelerated.

However, we postulate the price action in the underlying markets has informed us that Exxon investors could be sorely disappointed as we move into 2023.

Likely More Pain Ahead For The Energy Market

As seen above, WTI crude oil bulls have re-engaged and trying to hold the $75 level. Our assessment is sellers already retook the initiative more than three months ago, as buyers failed to maintain its medium-term bullish bias. Notwithstanding, we expect buyers to defend the current levels vigorously.

Exxon has also benefited from the surge in natural gas futures (NG1:COM) in Q3, leading to higher realized prices and bolstering its operating performance.

However, NG1 has fallen well below its August/September highs. It has also declined well below its Q3 benchmark price of $8.2, as NG1 last traded at $5.65. Hence, we believe it will get increasingly challenging for Exxon to repeat its 2022 performance moving ahead as it laps challenging comps.

Moreover, even optimistic Wall Street analysts expect a significant moderation in Exxon’s operating cash flow through 2024. As a result, Exxon’s free cash flow (FCF) margins are also expected to top out in FY22.

Also, we highlighted earlier that we believe there are downside risks to the consensus estimates, given the optimism relative to the S&P 500’s revisions.

Is XOM Stock A Buy, Sell, Or Hold?

XOM last traded at an NTM normalized P/E of 9.1x, in line with its industry forward P/E of 10x. However, it remains well below its 10Y average of 14.7x.

But, we urge investors to consider that even the bullish consensus estimates indicate a significant moderation in its earnings through FY24. As such, we believe it explains the market’s indifference toward re-rating XOM and its peers.

Therefore, we assess that the market is likely anticipating the risks of more substantial earnings compressions not reflected in its current projections.

XOM bulls could point to the higher high price structure, as it re-tested and surged above June highs.

However, we also gleaned a rapid momentum surge from its September lows, which we mentioned in our previous article. Moreover, we observed that the bulls have been unable to maintain their momentum, as sellers returned.

Also, buyers need to consider that XOM formed a higher high against the context of weak energy markets, different from its previous June highs. Some market strategists also discerned the bifurcation and cautioned in a recent note.