The beds, as well as meals and support services, will be made available from Tuesday, just one week after the Commonwealth-owned facility closed as a COVID-19 quarantine hub, the Prime Minister announced.

“Today we have announced at Mickleham, the Commonwealth facility will be made there, 250 beds for people who have been evacuated from flood-affected communities and part of our commitment to make sure that every support is being provided to these communities that are under such enormous pressure,” Albanese said.

In Victoria emergency disaster payments are available in a total of 23 LGAs.

Plus 17 areas of Tasmania and 31 throughout NSW also qualify. ﻿

Applications can now be made and are open 24 hours.

“In Victoria, the disaster recovery allowances are available in the 23 local government areas that are impacted.

“In Tasmania, 17 local government areas are impacted and eligible for the disaster recovery allowance and in New South Wales, an additional four LGAs have been added unfortunately due to the spread of the impact of this flood event, bringing that number to 31.

“In addition to that… Australian government disaster recovery payment of $1000 per eligible adult, and $400 per eligible child, is available to people in the Victorian LGAs of Campaspe, Greater Shepparton, Strathbogie and Mitcham and the Central Coast.” 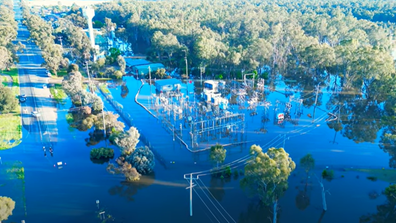 Meanwhile the army is on the ground helping flood-hit parts of Victoria.﻿

“Today, by the end of today, over 100 ADF personnel will be on the ground here in Victoria providing support with evacuations, sandbagging, providing whatever support is required and we will continue to respond positively to further requests,” Albanese, said.

He said the Mickleham facility has dedicated car parking onsite, as well as a shuttle bus providing free transport to and from Craigieburn train station and the local shopping centre – as well as other short transport requests if residents need them.

“People will not make their own way and as best as we can we will provide transport options for people to get there,” Victorian Premier Daniel Andrews said.

“We want to make this as seamless as possible and it is an option, it is not mandatory and not something everyone will choose to do.

“We’re talking about many hundreds and indeed maybe thousands of people out of their homes, through no fault of their own.”

Despite the day’s clearer skies, the deluge earlier in the week is continuing to drive river level rises, with floodwaters threatening thousands of homes ﻿north of Melbourne.

Dozens of safety and emergency warnings are in currently in place across the state, with residents in the town of Charlton﻿ in north-west Victoria being told to evacuate the area immediately.