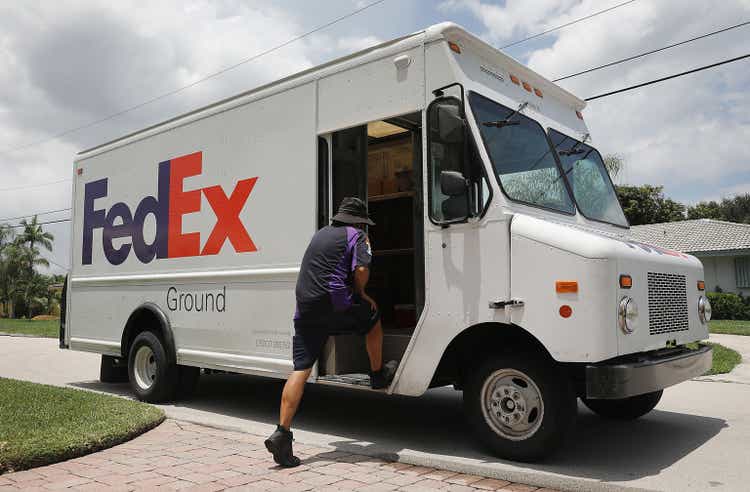 FedEx (NYSE:FDX) is an American company providing postal, courier and other logistics services around the world. It is the first in the world in terms of volume of cargo transported and the second in terms of the size of its air fleet. The coronavirus has had a favorable impact on FedEx’s business. Along with a boom in sales, the company has been successful in containing costs through a judicious combination of job cuts and financial incentives.

Advantages of the company

A major trend is the acceleration of e-commerce growth. Before COVID, analysts predicted that the U.S. domestic market would reach 100 million parcels per day by calendar year 2026. Now, the company predicts it will reach that mark by 2023.

Revenue for 5 years increased by more than 50%, profit for the same period increased by 200%. The management managed to increase the operating margin, which improved markedly to 5.97% from 2.8%, except last quarters.

Launched DRIVE, a program that supports the “Deliver Today, Innovate Tomorrow” strategy introduced in June. The team has already begun cutting costs as part of this program, which will eventually enable Network 2.0, long-term end-to-end network optimization.

The company’s revenue is divided into 4 segments:

Overall company presented weak report, which was announced in advance, after the announcement and there was a major collapse of the stock price. At FedEx Express, adjusted operating profit dropped 72% and operating margin to 1.6% from 5.2% last year, due to lower average daily shipment volume and cargo. FedEx focused on the savings and tried to assess how effective they would be. The main cost reductions will come from the largest and least profitable segment, FedEx Express. FedEx sold about $300 m$ of that in the first quarter and expects to realize about $700 m$ in savings in the second quarter. The largest expected contribution of the cost reductions will be the changes being made to the express airline network as it reduces the number of flight hours worldwide. The second largest segment by revenue, FedEx Ground, is expected to see savings of $350m to $500m. The cost reduction approach in Ground Services is primarily focused on streamlining existing operations. The last component of the expected savings will be overhead as they adjust the overall cost structure.

The second part of the plan focuses on continuous cost reduction. Launched DRIVE, a program that supports the “Deliver Today, Innovate Tomorrow” strategy introduced in June. The team has already begun cutting costs as part of this program, which will eventually enable Network 2.0, the long-term end-to-end optimization of the network. In total, it’s expected to generate an additional $4b in DRIVE-related savings by fiscal year 2025.

Americans are saving less than at any time since the 2008 crisis – a result of exorbitant prices for food, fuel and other goods. The weakening economy and the high cost of living are leading problems in the U.S. that need to be addressed by the authorities.

The company did not provide a forecast, rapid cost savings are a priority. Starting in FY 2023, prioritize cost-cutting actions to save $2.2b to $2.7b. They also announced a new remote area surcharge and peak prices in the U.S. Europe and Asia will launch a new handling surcharge, also in January. In addition, international adjustments to the fuel charge tables for Asia, Europe, the Middle East and Africa were introduced in August.

The company trades mostly of course at a discount. By multiples are 30-40% cheaper than the industry average. 3-year GAGR of revenue 10%. Dividend yield 3% per annum with a normal payout ratio of 20-40%. The next quarter is predicted to be worse than the reported quarter, with stock price already down 28% on the news of lower demand. Much of this impact is already priced in. One of the main risks that can be seen when looking at FedEx’s financial reports is the company’s significant capital expenditure needs. Today’s delivery companies need an expensive fleet of planes, trucks and vans. Consequently, most of the cash flow is spent on CAPEX.

In terms of share price, the company is back to its pre-Covid level. Delivery companies are very sensitive and dependent on the state of macroeconomics, often being a leading indicator of problems for the stock market. Predominantly all the negativity is already priced in, but the room for growth is limited. Taking into account the possible recession, it is not worth buying the company at this time.