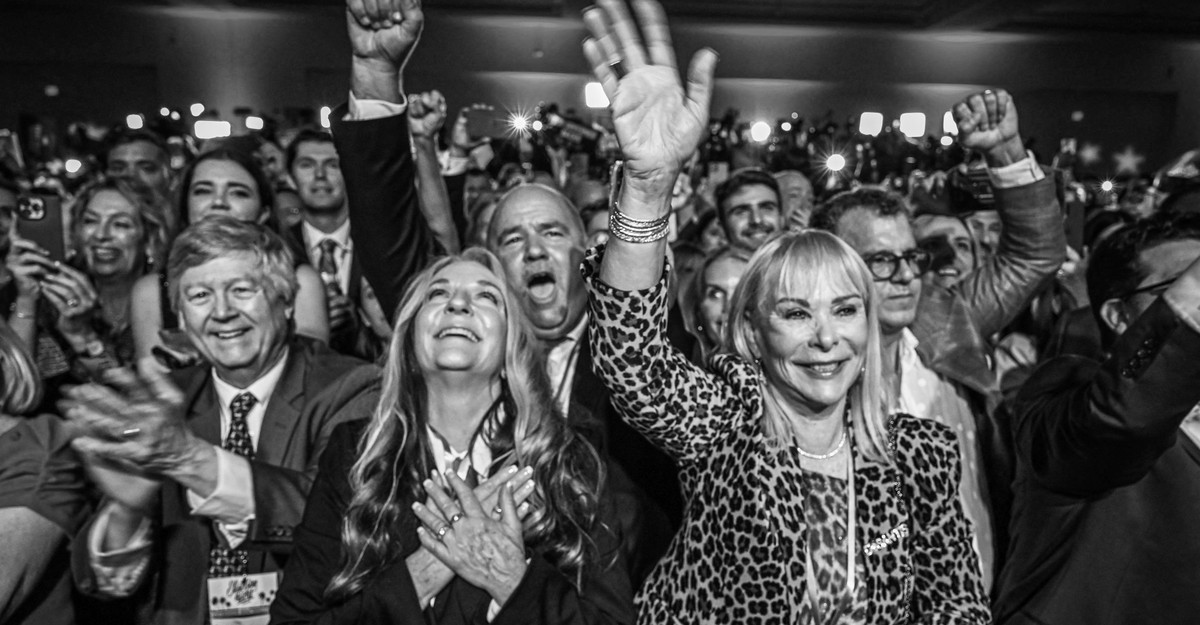 MIAMI—It’s no longer correct, and certainly no longer quasi-mandatory, to describe Florida as “the ultimate swing state,” not after Tuesday night’s Republican blowout here. But it’s worth recalling just how spectacularly swingy it used to be.

If you count all 50 million votes Florida cast for president from 1992 to 2016, just 20,000 votes separate the two parties, or 0.04 percent. That includes the ultimate swing-state election of 2000, when George W. Bush nosed out Al Gore by a mere 537 votes in Florida—and, eventually, one vote on the Supreme Court. Florida was also a cliff-hanger in the 2012 and 2016 presidential races, both decided by 1 percent. And Rick Scott won statewide elections by 1 percent or less in 2010, 2014, and 2018, when Governor Ron DeSantis squeaked out his own 0.4 percent victory.

But DeSantis bludgeoned former Governor Charlie Crist by an astonishing 19 points on Tuesday, a pretty decent night for Democrats running almost everywhere except Florida. Senator Marco Rubio was also reelected in a huge blowout, while Republicans swept every state office and claimed unprecedented supermajorities in both houses of the state legislature.

Republicans even romped in the urban Democratic stronghold of Miami-Dade County, where DeSantis lost by more than 20 points in 2018. My heavily Democratic Miami neighborhood sits in one of Florida’s most Democratic state-assembly districts, but a Republican convicted of fraud the last time she held public office will be my new representative. My Republican congresswoman, Maria Salazar, whose reelection was once considered a toss-up, coasted to victory by 15 points.

I chatted last night with a shell-shocked Manny Diaz, the former Miami mayor who runs the Florida Democratic Party, and he didn’t even try to spin me.

So what the hell happened? How did a purple state suddenly become South Alabama?

Yes, Florida Democrats faced the usual headwinds of a midterm election with a president from their party in the White House, as well as the specific 2022 headwinds of inflation, rising interest rates, and rising crime. But so did Democrats who overperformed in other states. In Florida, the party also has an attitude problem, an organizational problem, a Latino problem, a growth problem, and a broccoli problem. And none of them will be easy to solve.

But let’s first note what didn’t happen, because Democrats began whining about this even before the election: Republicans didn’t steal it. The magnitude of the wipeout shows that it wasn’t about a few Proud Boy poll workers, and the statewide nature of the wipeout shows that it wasn’t about gerrymandering. DeSantis did get the GOP legislature to enact partisan voting laws limiting drop boxes and mail-in ballots while rolling back the felon voting rights that had been restored by a public referendum. But although the governor took well-deserved flak for siccing his “election police” on 20 confused and probably innocent voters, that doesn’t explain how he won by 1.5 million votes.

The pitiful turnout of Florida Democrats probably had less to do with voter suppression than voter depression. Republicans have controlled Tallahassee since 1998, consistently winning narrow statewide elections when Florida actually was a swing state, even when Democrats did well nationally in 2018. This is the attitude problem: Biennial heartbreak gets frustrating for volunteers, donors, and voters. Diaz told me Democrats have been dropping their party affiliation “in droves,” and it’s easy to see why casual voters would get tired of identifying with a losing team.

The national Democratic establishment also seems tired of identifying with this losing team. After Donald Trump won Florida for the second time, expanding his margin to 3.4 points while making major inroads in Miami-Dade, Democratic groups that spent $58.7 million in the state in 2018 spent only $1.4 million in 2022. DeSantis raised more than six times as much as Crist.

Did the money dry up because the situation was hopeless, or did the situation become hopeless because the money dried up? Probably some of both, but in any event the state party is now in shambles. Since 2020, the number of registered Democrats declined in all but one of Florida’s 67 counties, and they were outnumbered by registered Republicans on Election Day for the first time ever. Anyone involved in Florida politics will also tell you that the GOP does far more voter outreach, not only during election season but all the time. Diaz is a smart guy who inherited an organizational mess—my mom tried to volunteer for the Democrats in 2018, but nobody returned her calls—and he reminded me that voter registration and outreach cost money. But at this point, it doesn’t really matter whether the chicken or the egg came first.

The party’s inability to engage voters seems especially egregious with Latino voters, which helps explain the tectonic shift in Miami-Dade. Again, a big part of the problem seems to be that Republicans actually show up in Latino communities.

Scott visited Puerto Rico eight times as governor, and held six events at a Venezuelan restaurant in Doral; the senator he narrowly unseated in 2018, Bill Nelson, once told a Democratic operative that he wasn’t reaching out to Latino media because he wasn’t going to get the Cuban vote. In fact, Cubans are only a third of Florida’s Latino voters, something a U.S. senator should have known about his own state, and Barack Obama nearly won the Cuban vote in 2012. The problem extends beyond Cubans and Miami-Dade; exit polls suggested that DeSantis even won the Puerto Rican vote, and his surprising victory in heavily Puerto Rican and reliably Democratic Osceola County supports that.

It’s hard to know how much of the Democratic Party’s struggle to attract Latino voters is blocking and tackling, and how much is political messaging and substance. While Spanish-language radio here is full of right-wing misinformation portraying Democrats as socialists and Communists, the smears might pack less punch with exiles from Cuba, Venezuela, Colombia, and Nicaragua if Democratic surrogates took to the airwaves to fight back. When Biden extended protections to migrants fleeing Venezuela, he did not make a big deal about it, and neither did his party.

Democrats have also struggled to respond to Republican attacks on cultural issues. While Florida Latinos are more liberal than their reputation suggests on kitchen-table economics—Obama ran Spanish-language ads touting the Affordable Care Act in South Florida when it was unpopular almost everywhere else—polls suggest that they were uncomfortable with Democratic support for the Black Lives Matter movement, with calls to defund the police, and with other progressive stances on social issues. The Cuban American Democrat running to be my state senator featured her wife prominently in her campaign literature, and invited supporters to a get-out-the-vote drag party. She lost by eight points in a district Biden won.

Democrats can’t win Florida if they can’t win around Miami, and they can’t win around Miami if they keep hemorrhaging Latino votes. But their biggest problems are in heavily white, heavily Republican communities such as the Villages, Fort Myers, Naples, St. Augustine, and Cape Coral, because those are the state’s fastest-growing communities. In 2016, 10 of America’s fastest-growing metros were in Florida, and nine of them voted for Trump, a Boomer-skewing partisan influx that has only accelerated as the state has become more of a MAGA magnet.

If Democrats want to do something about this problem, they can’t think of it as an inevitable fact of life in the Sunshine State; they need to ask why the Republican Party is so attractive to newcomers, and why Florida is so attractive to Republicans. My two cents, as I wrote in an essay about Cape Coral after Hurricane Ian, is that the sugary DeSantis vision of a Free State of Florida paradise where nobody will force you to pay income taxes, get vaccinated, care about climate change, limit your water consumption, or build your house in a safe location is extremely alluring. It promises ice cream when Democrats are mostly offering broccoli.

Don’t get me wrong: We should all eat our vegetables. The DeSantis approach is irresponsible, a formula for crumbling infrastructure, climate chaos, recurring droughts, and $100 billion storms like Ian. It’s also a formula for budget gaps, if Democratic suckers in Washington don’t send billions of dollars to plug them. But we’re a species of short-term thinkers, so now-mine-more politics works well. And if Democrats can’t figure out a way to punish Republicans for insurance crises, water crises, and other consequences of their neglect of the future—or come up with some short-term goodies of their own—the MAGA magnet could be entrenched for the long term.

Change is certainly imaginable. Fernand Amandi, a Democratic strategist in Miami who helped Obama do so well with Latinos in the state in 2012, says that after that election, Republicans realized their path back to the White House depended on making sure that didn’t happen again. “They got serious, and they’ve been on the ground nonstop for the last 10 years,” Amandi told me. “Democrats went to celebrate the inauguration and never came back.” He said his party needs its own 10-year plan—“and it needs to start tomorrow.”

But that does not seem likely. Biden showed that Democrats can win the White House without Florida, and his team seems to be planning to try that again. For the foreseeable future, the ultimate swing state will be just another red state.