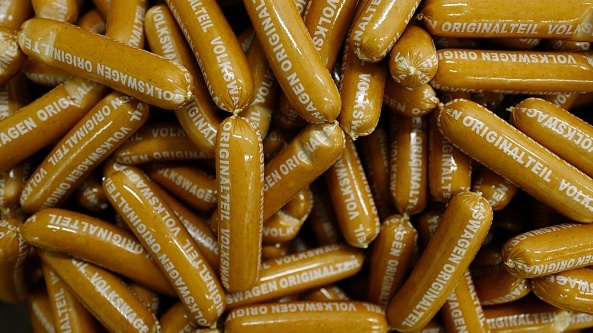 The traditional German Wurst sausage has become such a staple in the canteen at Volkswagen’s Wolfsburg factory that VW actually started making its own.

The sausages served up to hungry hordes of those who spend their days assembling the Golf, Tiguan, and Touran are actually made in-house by VW.

In a corner of Wolfsburg, a dedicated team of 30 VW sausage makers take pork in from the surrounding farmland, and turn it into Volkswagen Part No. 199 398 500 A. Yup, the sausage has a factory part number, just as does a clutch, wing mirror, or completed engine.

Not for much longer, though. VW has confirmed that it’s cutting out sausage production, not so much for the health of its workers (in fact, at 20 per cent, a VW sausage is actually rather lower in fat than a traditional German Wurst) but because of carbon emissions. According to CarbonBrief.org, global meat and dairy consumption accounts for around 14 per cent of all carbon emissions, a figure which may actually make it slightly more harmful to the environment than vehicle production and use.

The German Green Party recently introduced an edict that said companies with office and factory canteens should start to introduce one meat-free day per week, to help reduce carbon emissions. VW has gone one further, and won’t be making its sausages anymore.

By 2025, current VW boss Herbert Diess wants to stop the company using any meat at all, replacing the sausages and burgers with vegan and vegetarian alternatives.

The move has, unsurprisingly, caused ructions.

Former German chancellor, Gerhard Schroder (who had also once been a member of the VW Board)  took to LinkedIn to say: “If I were still on the supervisory board of VW, there would have been no such thing. A vegetarian diet is good, I do it myself in phases. But basically no Currywurst? No! Currywurst with fries is one of the power bars of the skilled production worker. It should stay that way. When I’m in Berlin, my first path usually leads me to one of the excellent currywurst stalls. Also in Hanover there are excellent curry sausages. I don’t want to do without that, and I think many others don’t want that in their company canteens either.”

In 2019, Volkswagen actually made seven-million sausages — more than the number of VW-badged vehicles it produced. The sausages are sold to the public in shops in the Wolfsburg area, and through the VW museum, so if you fancy one for lunch, better be quick.

The Wurst news is that they won’t be around much longer.