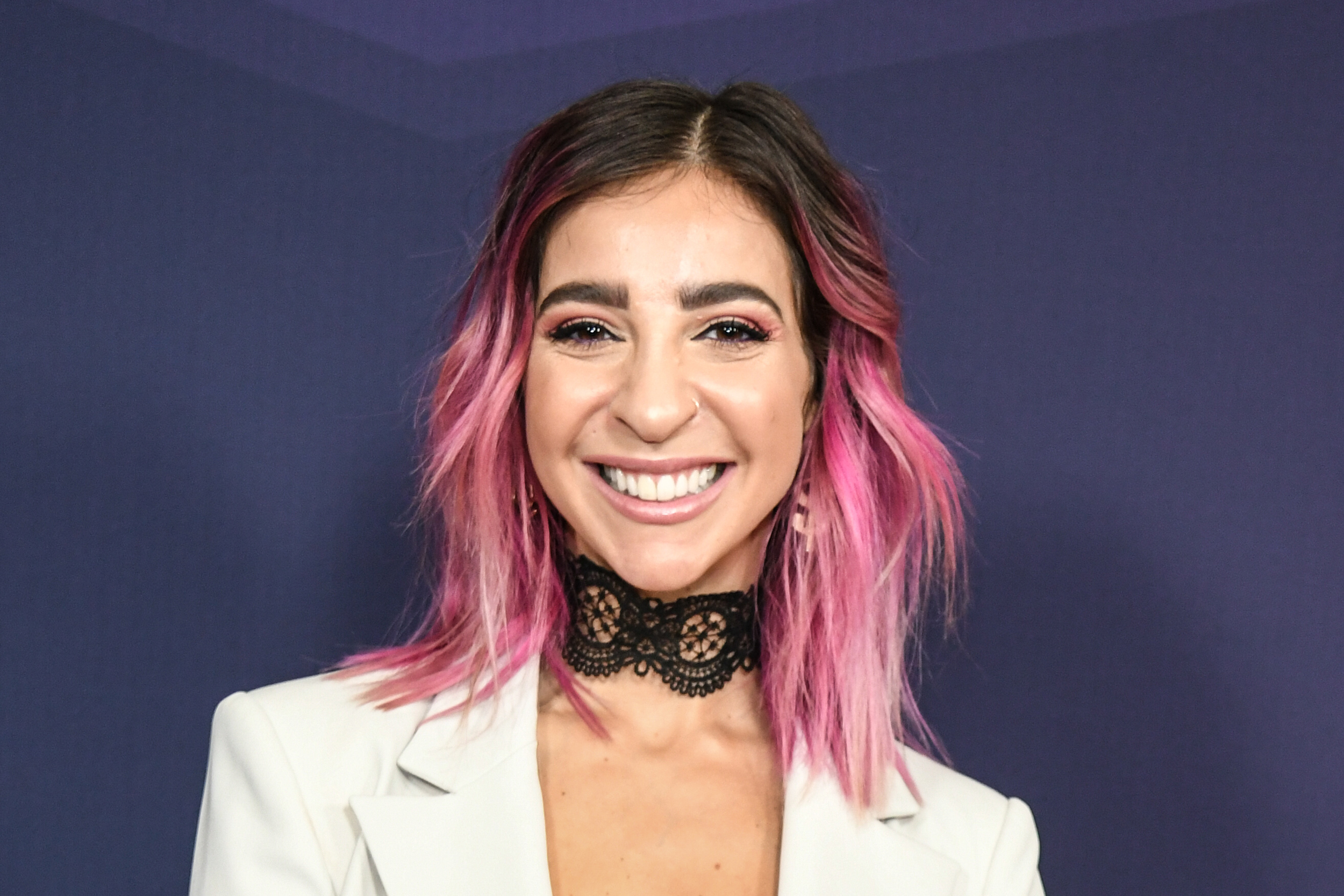 The concerned comments from Gabbie Hanna’s followers began pouring in on Wednesday.

By that time, Hanna, a social media creator who has more than 12.8 million followers across YouTube and TikTok, had already posted more than 100 increasingly erratic videos to her TikTok, including several in which she made comments that some of her followers called racist and transphobic. She also uploaded videos of her letting someone, who appeared to be a stranger, enter her Southern California home. He eventually left after posting TikToks from inside her house. Since then, it appears Hanna has allowed other seemingly unknown people into her home, and documented it on the platform.

The videos, which many have described as alarming, have sparked a discussion regarding the responsibilities viewers and social media platforms have when they witness someone, particularly a public figure, appear to experience a mental health crisis live online. Hanna’s TikTok posts, which included long, uncharacteristic monologues about religion and claims that she herself is a deity, have also highlighted the app’s ability to launch any person or situation to the top of the internet’s consciousness, regardless of the consequences.

Some on social media urged the platform to step in and intervene, as Hanna continued to post videos at a rapid pace. Her name trended across Twitter on Wednesday. Her TikTok videos, which many said were pushed to their “For You” pages, racked up millions of views.

“[TikTok] when are y’all gonna stop letting gabbie hanna post? how far does this have to go before you intervene?” wrote one Twitter user.

Hanna’s followers, many of whom suggested there was not enough action from TikTok itself, took matters into their own hands. A few wrote in comments that they called the police urging them to go to Hanna’s home. Several people also tagged Hanna’s relatives in comments to alert them of the situation. Some claimed they showed up to her home to check in on her themselves.

These efforts to help Hanna, even if they were made in good faith, are not necessarily the best approach to such a situation, according to some mental health professionals. The overwhelming response to Hanna’s TikToks has demonstrated that parasocial relationships — one-sided emotional investments in public figures — can muddle appropriate boundaries online.

“People reaching out virtually and trying to support her [Hanna], that’s a more appropriate response, especially if you’re a fan and not a physician,” said Judith Joseph, a board certified psychiatrist who makes educational content about mental health on TikTok.

Taking that a “step further,” however, is “inappropriate,“ Joseph said, “because it sends the message that people with mental illness need to be told what to do, can’t make their own decisions and need to be rescued. And a lot of times, that’s not the case.”

Police also aren’t necessarily equipped to effectively respond to mental health crises, said Shani Tran, a licensed professional clinical counselor known on TikTok as theshaniproject. Calling the police may also endanger the person in crisis. More than 1 in 5 people fatally shot by police had mental illnesses, according to a Washington Post database of fatal U.S. shootings by on-duty police officers.

“We’ve grown up as a society to believe that the best way to help someone is to call the cops,” Tran said. “And honestly, that’s not always the best way, because the first thing is cops are not trained to be able to handle mental health crisis sort of situations. And oftentimes, it can be traumatizing to the person when the cops show up.”

On Thursday, Hanna posted to TikTok that she had been “cuffed and detained by 5 officers who busted into [her] house.”

“Almost all of the officers asked me over and over and over again, ‘Is … the reason we’re here is we just have to make sure you don’t want to hurt anyone or yourself.’ And I just laugh and say, ‘No, I don’t want to hurt anybody,’” Hanna said in another video posted Thursday afternoon. She wrote on the video that she had two psychiatric evaluations but was not taken into treatment.

A spokesperson for the Los Angeles Police Department said he couldn’t disclose specific names or addresses, but confirmed that officers performed a welfare check around 9 a.m. on Wednesday morning on the same block as Hanna’s residence in the L.A. area. The LAPD spokesman could not confirm whether a second welfare check was performed that day.

Officers had “made contact” with and interviewed the subject of the welfare check, but “she did not meet the requirements” to be placed in an involuntary psychiatric hold, the LAPD spokesman said.

In California, individuals can be involuntarily held in a hospital or mental health facility for 72 hours if they are a danger to themselves or others, or if they have a disability that prevents them from providing their own food, clothing or shelter.

As fans rallied to help Hanna, other creators joined the chorus of those raising concerns, and urged their followers not to mock her.

Hanna first became popular as a comedian on Vine in 2014. Throughout her career she weathered controversies, but starting in 2019 her online persona devolved into nonstop feuds, including with her former YouTube friend group.

Some creators said they feared for Hanna’s wellbeing, adding that the creator community has seen its members’ mental health episodes end fatally. In 2019, Desmond Amofah, 29, a Twitch streamer and YouTuber who went by the name Etika, died by suicide. Prior to his death, Amofah’s behavior on and offline was described as erratic and some in the creator community appeared to goad him into rants and extreme behaviors.

“Please be considerate of that when talking about her online right now,” tweeted YouTuber Ethan Klein. “We’ve lost YouTubers like this before and everyone said never again. So be nice please, she needs help right now, not ridicule.”

Creator and singer Peach PRC, who has been open about her own experience with psychosis and borderline personality disorder, commented her concerns on one of Hanna’s videos.

“i’m worried you’re being let down by the system, gabbie, i know the comments aren’t resonating with you right now but please be kind to yourself,” Peach PRC said.

Creator Paris Campbell called for having “safeguards in place to check on these people and maybe temporarily mute their accounts so it’s not spreading like wildfire.”

“While I don’t think anyone should necessarily be deplatformed for going through a mental health crisis, I personally find it kind of negligent to the public that this is allowed to play out in the way that it is,” she said in a TikTok video.

On its safety page, TikTok says, “[If] our intervention could help a TikTok community member who may be at risk of harming themselves, the TikTok team may also alert local emergency services.” The platform is also working with emotional health experts to improve its resources, according to the safety page.

TikTok has made moves to limit promoting potentially triggering content on users’ “For You” pages. In a July update, TikTok announced that viewers would likely see less content about topics like dieting, extreme fitness, sadness and “other well-being topics” that may be “fine as a single video, but potentially problematic if viewed repeatedly.” After banning “success coach” Andrew Tate over community guidelines violations, TikTok said it would flag certain content so it wouldn’t be recommended to users as they scroll through their “For You” pages.

Engagement on Hanna’s videos continue to skyrocket. As of Friday morning, all but one of the last 30 videos posted to her page had well over 1 million views. She’s posted more than 200 videos in the last three days. It’s unclear if some videos have been deleted.

In her recent videos, Hanna, who has previously been vocal about being diagnosed with ADHD and has spoken about her experiences with anxiety and depression, has expressed that she doesn’t need help.

Hanna did not respond to an email request for comment. Jett Prescott, the founder and CEO of Hanna’s management company, PennyFly Entertainment, said he and his wife “do not feel a statement on the matter is appropriate at this time.” He asked for viewers to respect Hanna and her family’s privacy.

Ultimately, Tran cautioned viewers against assuming that they’re part of a creator’s immediate support network. Holding interventions or “tricking” people in crisis into getting treatment is unhelpful even in personal relationships, Tran said, let alone between strangers.

If you or someone you know is in crisis, call 988 to reach the Suicide and Crisis Lifeline. You can also call the network, previously known as the National Suicide Prevention Lifeline, at 800-273-8255, text HOME to 741741 or visit SpeakingOfSuicide.com/resources for additional resources.