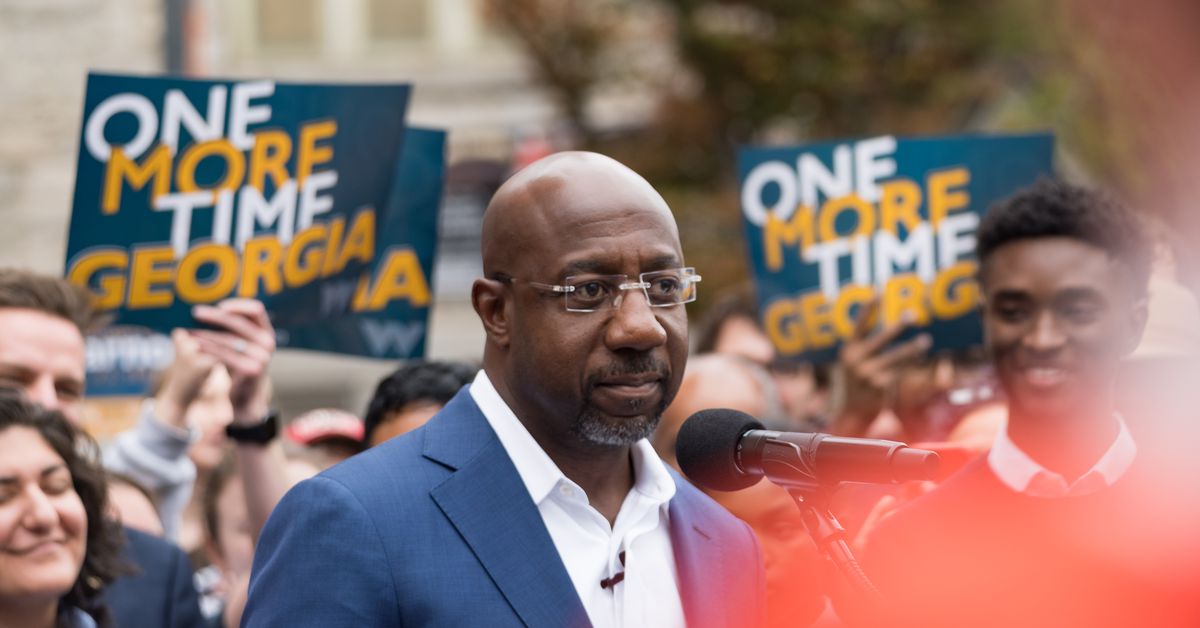 While Democrats in the Senate may be breathing a collective sigh of relief after Sen. Catherine Cortez Masto’s win in Nevada, their slim majority would get an important boost from a Sen. Raphael Warnock win in the Georgia runoff race December 6. The ability to pass key legislation in the next two years and fill court vacancies may depend on it.

Typically, the midterm elections serve as a referendum on the party that holds the White House, with the president’s party losing seats in Congress if not necessarily ceding full control. In 2018, for example, Democrats swept the House of Representatives, picking up 40 seats in the House for the majority while Republicans gained two seats in the Senate to maintain their majority.

The typical result is that the president’s party loses Senate seats, which has happened in 13 of the last 19 midterm elections, as FiveThirtyEight reported Friday. But Democrats, if Warnock wins reelection in December, will have picked up a seat and flipped one as well, in Pennsylvania with John Fetterman replacing Sen. Pat Toomey (R), following his win over Mehmet Oz.

Although it’s not likely that Democrats will be able to push through aggressive, landmark legislation with such a slim majority — particularly if they end up losing the House, which looks likely as of this reporting — there will be some critical advantages to keeping it.

As Vox’s Li Zhou wrote Saturday, the split Congress does have its disadvantages but with a majority in the Senate, Democrats will be able to confirm federal court judges with a simple majority. That will provide an important counterweight to the raft of federal judges appointed by former President Donald Trump and confirmed by a Republican Senate. Supreme Court, federal district court, and circuit court judges enjoy lifetime appointments, and they have the ability to shape legal interpretation and policy for decades to come. With 116 vacancies — and 62 lacking nominations, Zhou wrote — Democrats can make plenty of impact over the next two years.

A Democratic majority in the Senate will also retain power over which bills come to the floor for discussion — meaning they can reject approved bills from a Republican-led House, Zhou wrote.

However, a GOP House can also do a fair bit of damage if it decide to conduct the investigations House Minority Leader Kevin McCarthy has threatened or impeach Biden and other top officials. A split Congress also probably means bitter battles over issues like funding the government and raising the debt ceiling, Vox’s Rachel M. Cohen, Dylan Scott, and Li Zhou wrote earlier this month. Should Republicans win the House, as they seem poised to do,

House Republicans are prepared to hold any increase to the debt ceiling hostage in exchange for cuts to other programs like clean energy investments and Social Security. In that case, the House and Senate could face an interminable standoff that could put the United States on the verge of defaulting on its debt, a scenario that could have devastating consequences for the economy.

Here’s why Georgia is still important to win

Those advantages will be amplified should Warnock win the runoff in December.

If Warnock keeps his seat, Democrats won’t have to depend on Vice President Kamala Harris to cast a tie-breaking vote, and they would have more leverage over Sens. Joe Manchin (WV) and Kyrsten Sinema (AZ), the more conservative members of the party, in order to get legislation passed.

Manchin and Sinema both put up guardrails to Biden’s signature legislation, the Build Back Better Act. That legislation, in a greatly reduced form, passed as the Inflation Reduction Act, with both senators’ vote; however, monumental parts of the legislation, like free universal pre-kindergarten, had to be abandoned.

There’s also more breathing room for Democrats if Warnock wins his race, should there be any vacancies or absences, as there were in January when Sen. Ben Ray Luján of New Mexico suffered a stroke ahead of the crucial vote to confirm Ketanji Brown Jackson to the Supreme Court.

1) Having a majority on each Committee versus power sharing/deadlocks requiring discharge petitions;

2) No single D Senator can hijack/block nominations; and

3) Ds can have *two* members absent and still hold votes.

Democrats won’t be able to do everything they want — that means the filibuster will probably remain in place, and Biden’s promise to enshrine abortion protections into law probably won’t come to fruition in a divided Congress.

But the likelier outcome is that Republicans take the House with a slim majority.

Here’s what Dems are doing to push Warnock over the edge, and here’s what the GOP is doing for Walker

Warnock, who took office in 2021, has already won a runoff for his Senate seat, as did Sen. Jon Ossoff, another Georgia Democrat. In his first runoff, against incumbent Republican Kelly Loeffler, Warnock won by two points.

The end result of Tuesday’s contest showed Warnock slightly ahead of Walker, with 49.42 percent of the vote to Walker’s 48.52 percent. A Libertarian candidate, Chase Oliver, racked up 2.1 percent, ultimately preventing either major party candidate from getting the majority.

Still, neither candidate won a majority in Tuesday’s contest; unlike many other states, Georgia requires a candidate to win 50 percent of the vote or face a runoff, a vestige of the South’s racist, segregationist past during the post-Civil War Reconstruction era. As Cal Jillson, a professor of political science at Southern Methodist University, explained to CNN in a Friday interview:

So, the White people who were in control of the legislatures used the runoff to ensure that if there were multiple candidates in the first election and a Black person ran first or even second, the White vote could consolidate in the runoff and defeat that Black candidate.

Now, two Black candidates will face off for the first time in a Georgia Senate runoff, and money is pouring into the runoff. The website Open Secrets, which tracks political fundraising and spending, noted that the Georgia Senate race was the second-most expensive federal race this cycle, second only to the Pennsylvania race between Fetterman and Oz.

Now, headed into a runoff in just four short weeks — as opposed to the nine weeks candidates had to fundraise, strategize, and get out the vote before Georgia Gov. Brian Kemp signed a law last year limiting the time period before a runoff election — funds are already pouring into the campaigns.

Warnock’s campaign is receiving funding and logistical support from grassroots efforts like the New Georgia Project, as well as the Democratic Senatorial Campaign Committee (DSCC), which has already committed $7 million to fund ground operations, according to Politico.

“We know talking directly to voters through a strong, well-funded ground-game is critical to winning in Georgia, and we’re wasting no time in kick-starting these programs in the runoff,” DSCC head Sen. Gary Peters (D-MI) told Politico in a statement.

Organizing for Walker are conservative groups Susan B. Anthony Pro-Life America and its affiliated PAC Women Speak Out, which will spend at least $1 million on Walker’s runoff campaign, in addition to the $1.1 million already spent. Senate Minority Leader Mitch McConnell’s super PAC, the Senate Leadership Fund, will support Walker’s ground operations, to which Georgia Gov. Brian Kemp will contribute his data and canvassing infrastructure, according to the Washington Post.

In the midterm contest, Warnock benefited from split ticket voting, in which some voters chose popular Republican governor Kemp but declined to vote for Walker. Those votes were concentrated in metro areas, particularly Atlanta. Now that Kemp is no longer on the ballot, it remains to be seen whether his popularity will give Walker a boost.

Georgians can begin early voting on or before November 28, depending on when the general election results are certified.