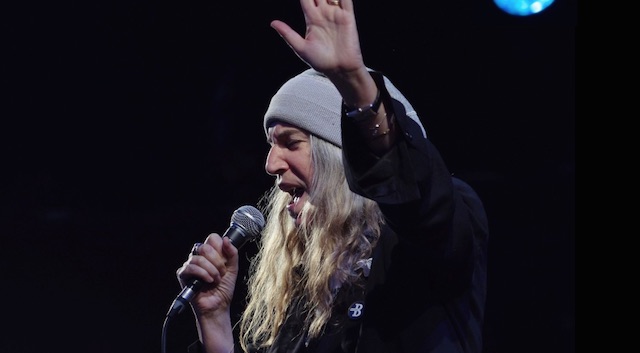 Her cover version of ‘Gloria’ became an instant classic, and she co-wrote ‘Because The Night’, with Bruce Springsteen. Among many honors, she won the National Book Award in 2010 for her memoir, Just Kids.

She still performs at special events–often for liberal political groups who revere her song, People Have the Power.

More recent projects include a photography exhibit and another memoir,M Train. WATCH her being presented this year with the key to New York City by the mayor… (1946)

97 years ago today, American astronomer Edwin Hubble announced the existence of other star systems beyond our own Milky Way Galaxy.

Using the powerful new 100-inch telescope in Southern California he studied the spiral nebulae Andromeda, which was a fuzzy patch of light generally thought to be clouds of gas or dust. But Hubble calculated that Andromeda was approximately 860,000 light years away—more than eight times further than the farthest star in the Milky Way—thus proving that the nebulae are separate star systems. Hubble later went on to discover dozens of other galaxies, and, being revered by astronomers, a famous telescope and scientific law of  recessional velocity were named after him. (1924)

And, on this day in 1865, author and poet Rudyard Kipling, was born. Beloved for his children’s stories, he wrote The Jungle Book at age 29 after settling in Vermont. 8 years later he became the world’s youngest Nobel Prize laureate for literature.

Born to British parents in India, his novel “Kim” is full of vivid narrative about the country where he grew up. He is regarded as a major innovator in the art of short stories, with works like “The Man Who Would Be King”. His poems include “Gunga Din” and “If“. His famous quotes include: ”God could not be everywhere, and therefore he made mothers,” and “Gardens are not made by singing ‘Oh, how beautiful,’ and sitting in the shade.”

If you can keep your head when all about you
Are losing theirs and blaming it on you,
If you can trust yourself when all men doubt you,
But make allowance for their doubting too;
If you can wait and not be tired by waiting,
Or being lied about, don’t deal in lies,
Or being hated, don’t give way to hating,
And yet don’t look too good, nor talk too wise: …
(Read the rest of his poem, “If”, at the Poetry Foundation

The iconic song that would become his signature tune was recorded and mixed at Oceanway Recording in Los Angeles. In only a few hours he would travel to Las Vegas to celebrate the New Year. With lyrics written by Paul Anka especially for Sinatra, the triumphant message of recollection at the end of a lifetime, declares without regret, “I did it my way.”

Happy 74th Birthday to Jeff Lynne, the English musician, singer, and record producer, who co-founded the rock band Electric Light Orchestra (ELO). His father bought him his first guitar, an acoustic instrument for £2 that Jeff was still playing in 2012. He co-founded the supergroup Traveling Wilburys in the 80s with George Harrison, Bob Dylan, Roy Orbison, and Tom Petty. With a star on the Hollywood Walk of Fame and a spot in the Rock and Roll Hall of Fame, Lynne still tours with ELO today. His recent Live CD/DVD set features his 2017 sold-out Wembley stadium concerts. (1947)

76 years ago today, Davy Jones, the musician, singer, actor, and jockey, best known as a member of The Monkees, was born in Manchester, England.

Still a teen, he won the role of the Artful Dodger in the stage production of Oliver! in London’s West End—and then performed it to great acclaim on Broadway, which earned him a Tony Award nomination.

In 1964, he appeared on The Ed Sullivan Show, the same episode that starred The Beatles, and said: “I watched them from the side of the stage, I saw the girls going crazy, and I said to myself, this is it, I want a piece of that.”

The following year, the 19-year-old singer debuted on the Billboard Hot 100 with the single What Are We Going To Do? The next year, Jones’ dream came true when he became the singer of The Monkees, a pop-rock group formed expressly for a TV show that became insanely popular.

Jones sang lead vocals on The Monkees’ No.1 hit Daydream Believer; and the No.2 hit A Little Bit Me, a Little Bit You; and the No.3 hit Valleri. Also a competent drummer, Jones played mostly tambourine or maracas, and became “the number 1 teen idol of all time,” according to Yahoo! Music.

He guest-starred in many cameo appearances on television shows, including an episode of The Brady Bunch. After performing Girl on the episode, the song became his best-remembered solo hit.

After the Monkees disbanded in 1970, Jones kept himself busy by establishing a New York City-style street market in Los Angeles, called ‘The Street’. He opened his first store, ‘Zilch’, in NYC’s Greenwich Village, selling “hip” clothing and accessories and also allowed customers to design their own clothes.

In 2009, Jones released a collection of classics and standards from the 1940s through the 1970s entitled She. He’s the author of an auto-biography called Made a Monkee Out of Me, in 1988, and the book Daydream Believin.

An amateur jockey, Jones was rushed to the hospital at age 66, after riding one of his horses in Florida and died of a heart attack resulting from arteriosclerosis. WATCH The Monkees’ Daydream Believer… (1945)