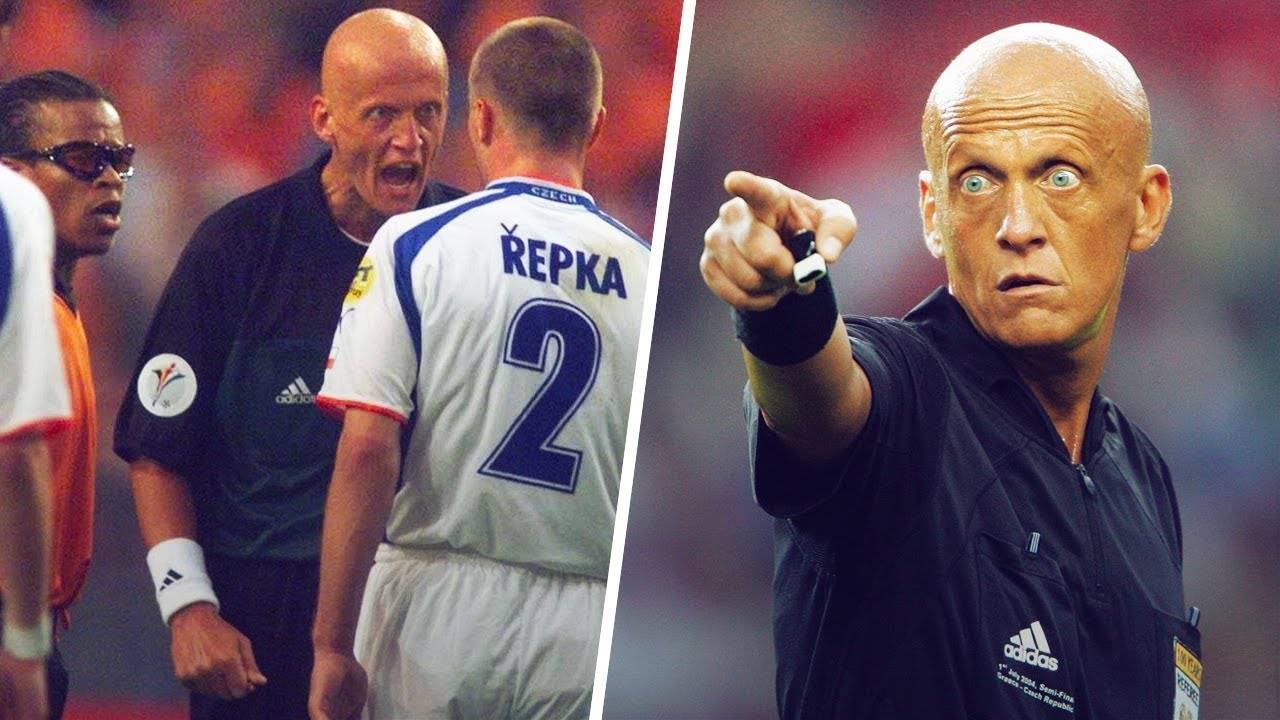 Happy 62nd birthday to the world’s best and scariest soccer official of all time: Pierluigi Collina. Born in Bologna, Collina’s eyeballs would become even more famous than his exceptional standard of refereeing, as an alopecia diagnosis during the earliest period of his career left him without any hair on his head or face, thereby taking away any other feature that would distract from his terrifying stare. In a game Americans routinely associate with sissy-boy Europeans falling over and complaining all the time, Collina suffered no lip from anyone, no matter how famous they were, and was almost always the first to raise his voice. WATCH the 6-time best referee boss the world’s best players… (1960)

In 1995, after he had officiated 43 Italian top-division matches, he was placed on FIFA’s Referees List. He was allocated five matches at the 1996 Olympic Games, including the final between Nigeria and Argentina. He refereed the 1999 UEFA Champions League Final, the second-biggest match in football, between Bayern Munich and Manchester United. In June 2002, Collina reached the pinnacle of his career when he was chosen for the World Cup final, between Brazil and Germany. A year before his mandated retirement age, He refereed the 2004 UEFA Cup Final between Valencia and Marseille.

Throughout his 10-year career as a top FIFA match official, he was voted world’s best referee 6-times, and is widely considered to be the best football referee ever. He had a method of refereeing that might not be considered acceptable anymore, which included occasionally squaring off with heated players, or even putting his hands on them.

When asked once if he ever felt intimidated by players after making a big decision, he could only laugh, and say “not easy to intimidate me.”

11 years ago today, the Umatilla American Indian nation finally won the right to hunt bison in Montana, restoring a centuries-old tradition guaranteed by a 1855 treaty signed with the federal government. The treaty granted the Oregon tribe the right to harvest on traditional hunting grounds, yet they were later restricted from entering the open, unclaimed land for more than a century. (2011)

And, 49 years ago today, a concert at the Rainbow Theatre in London heralded the return of Eric Clapton from heroin-induced isolation—a comeback after two years of inactivity arranged by his friend, Pete Townshend.

The show was recorded for an LP (Eric Clapton’s Rainbow Concert) that featured the pair, along with Ronnie Wood and Stevie Winwood, doing all the amazing Clapton songs from the Yardbirds and Cream. In the following twelve months, Clapton recovered from his drug addiction and recorded 461 Ocean Boulevard. (1973)

And, on this day in 2004, astronomers announced the discovery of the universe’s largest known ‘diamond’—2300 miles wide with 10 billion, trillion, trillion carats. It was actually the remnant of a white dwarf star in the constellation of Centaurus that researchers nicknamed Lucy, after the Beatles’ song, Lucy in the Sky with Diamonds. When this particular type of white dwarf cools, its material—carbon and oxygen—crystallizes and shines like a diamond. WATCH a video explanation…

And, Happy 72nd Birthday to Peter Gabriel, the English singer-songwriter who is one of the most influential progressive rock innovators of all time. At 17, he founded the band Genesis—and later launched a successful solo career, winning six Grammy Awards.

After his first hit, Solsbury Hill, he released the enormous 1986 No.1 single, Sledgehammer, which won a record nine MTV Awards with the stop-motion claymation video that became the most played music video of all time—opening the door for artists and bands to get creative and allow their music to stand out with captivating visuals. That album, entitled “So”, was certified 5x platinum and was brimming with perfect songs like Big Time (watch), In Your Eyes, Red Rain, and Don’t Give Up—a duet with Kate Bush.

Gabriel, an anti-apartheid activist (check out his song Biko) and an advocate for world peace co-founded The Elders with Richard Branson in 2007, a group of wise world leaders that was launched with Nelson Mandela and Desmond Tutu.

Music industry reports have promised a new LP with all original songs is forthcoming. WATCH the ground-breaking Sledgehammer video… (1950)