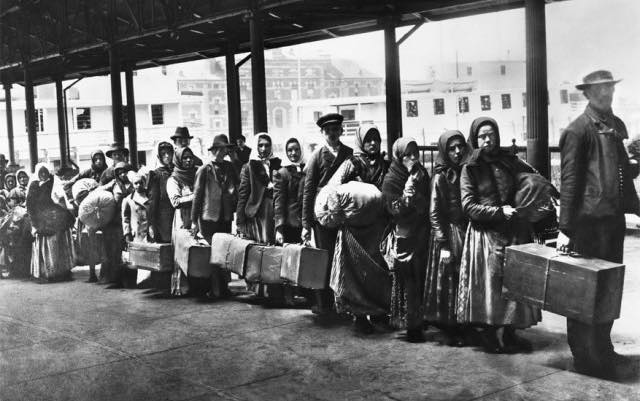 130 years ago today, Ellis Island opened as an immigration depot in the New York City harbor. Over 40 percent of the U.S. population—100 million Americans—can trace their roots back to this epic doorway.

17 million immigrants took their first steps towards freedom and opportunity at the Ellis Island processing center. CHECK Out a sampling of the amazing names recorded at Ellis Island—some of the greatest talents in literature, entertainment, politics, and science came through these halls after traveling across the ocean in search of a better life…. (1892)

On this day in 1959, Johnny Cash played a free concert for the inmates of San Quentin prison.

In the audience was a 19-year-old guy named Merle Haggard, who was serving a 15-year sentence for armed robbery. Haggard was released on parole the following year after joining the prison’s country band, inspired by Cash. The singer–songwriter, guitarist, and fiddler went on to score 38 number-one hits on the country charts between the 1960s and the 80s.

And, 287 years ago today, Paul Revere was born in Boston.

The American silversmith, engraver, and Patriot in the American Revolution was immortalized for his midnight horseback ride to alert the colonial militia to the approach of British forces before the first shots rang out in Lexington and Concord. At age 41, Paul Revere was a prosperous Boston silversmith who supported independence for the American colonies and helped organize an intelligence network to keep watch on the British military.

Following the war, Revere returned to his silversmith trade, branched out, and, in 1800, he became the first American to successfully roll copper into sheets for use as sheathing on naval vessels. (1735)

121 years ago today, the Federation of Australia was born. The Constitution of Australia came into force, uniting the 6 colonies of Queensland, New South Wales, Victoria, Tasmania, South Australia, and Western Australia under one federal government. The idea of being ‘Australian’ had been celebrated in songs and poems for decades; finally, a fireworks display in Sydney marked the political achievement with a sign that read ‘One people, one destiny.’

As the six colonies had become inspired by other federations that had emerged around the world, such as the U.S. and Canada, their slogan became “a nation for a continent, and a continent for a nation”.

Each of the states kept their systems of government and legislatures, but they wanted a federal government that would be responsible for matters concerning the whole nation. Championing a national railway system, Sir Henry Parkes, the instrumental and persuasive Premier of the Colony of New South Wales was known as the “Father of Federation”, though he died before its fruition.

He said in his famous 1889 Tenterfield Oration, a speech that birthed the unification of a nation: “Surely what the Americans have done by war, Australians can bring about in peace.”

Sir Edmund Barton, a judge, was also instrumental to the process, and later inaugurated as the first prime minister. Barton, who was also a delegate to the constitutional conventions, played a key role in the drafting of a national constitution. He resigned as prime minister after 3 years to become a founding member of the High Court of Australia, where he served until his death. (1901)