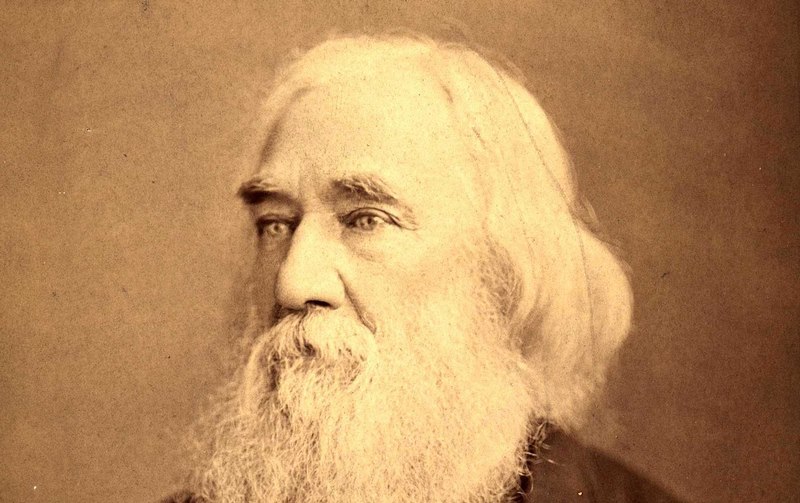 Also, 214 years ago, the heroic American legal scholar and abolitionist writer Lysander Spooner was born. Famous for his work The Unconstitutionality of Slavery, Spooner took on disunionist, pro-slavery figures in the intellectual arena by challenging their flawed notion that the Constitution protected their right to enslave black people. Fredrick Douglas, who originally saw the Constitution as a means to enforce unjust laws upon the country, claimed Spooner’s arguments convinced him to take the position that the Constitution means what it says, and doesn’t reflect the opinions or desires of any particular Framer. In the years following the book’s publication Spooner released subsequent pamphlets on jury nullification and other legal defenses for escaped slaves, and offered his legal services to fugitives, often free of charge. READ more of his brave advocacy. (1808)

His arguments were described by Mississippi Senator Albert Brown as the most formidable legal challenge the abolitionists had presented, and in 1858, he published the “Plan for the Abolition of Slavery” which outlined plans for servile rebellion against the slave-owners.

He was also vigorously protective of the rights of the poor and middle class. In the 1830s he established a law practice, despite the fact that he had not finished the Massachusetts mandate for 3-years in a legal school, a restriction he felt was state-sponsored discrimination against the poor during a time where few had the money to attend university. In 1836 he wrote “no one has yet ever dared advocate, in direct terms, so monstrous a principle as that the rich ought to be protected by law from the competition of the poor,” and the 3-year restriction was subsequently abolished.

Spooner also argued in his book Trial by Jury the right of jury nullification, saying that a trial jury not only had the right to deliver a guilty or innocent verdict, but also to reject the law upon which the charges have been brought: namely that the jury could decide themselves whether it was just or unjust to enforce any law, state or federal. Despite Spooner making this argument more than 150 years ago, it is as relevant as ever, and still used today to nullify the Controlled Substances Act in trials of cannabis possession. Other arguments Spooner wrote are still being cited by Supreme Court rulings as recently as 2008.

And, 79 years ago today, the rock-blues singer–songwriter Janis Joplin was born in Port Arthur, Texas. She was one of the biggest female rock stars of the psychedelic 60s, with five of her singles reaching the Billboard Hot 100, including her #1 hit cover of the song “Me and Bobby McGee”, and an original composition “Mercedes Benz”, her final recording. After releasing three albums, she died of a heroin overdose. (Jimi Hendrix, Jim Morrison, Kurt Cobain, and Amy Winehouse also were rock performers who died at age 27.) Her fourth LP, Pearl, released three months after her death, reached number one on the U.S. album charts. (1943)

And, 213 years ago today, Edgar Allan Poe was born in Boston. The writer, editor, and literary critic is best known for his poetry—The Raven, for instance, became an instant success—and for his short stories, particularly the ones steeped in mystery and the macabre. He is one of the earliest American writers to utilize the short story, and is often called the inventor of detective fiction. He also contributed to the emerging genre of science fiction. He died in Baltimore at age 40; the cause of his death is unknown—but has been variously attributed to alcohol, “brain congestion”, cholera, drugs, heart disease, rabies, suicide, tuberculosis, and other causes. (1809)

Coopers Inc. had been making socks and undergarments for decades, but by the middle of the Great Depression in 1934, the company that was founded by Samuel Cooper in St. Joseph, Michigan was nearly bankrupt. Then, on a snowy night in downtown Chicago, the world’s first briefs were sold in the Marshall Field’s store—and they proved so popular, over 30,000 were sold within three months.

They were designed by Arthur Kneibler after he received a postcard from the French Riviera showing a man in a tight swimsuit. The postcard inspired an underwear style that replaced the common design of loosely-fitted leg sections. The company dubbed the design the Jockey, since it offered a degree of support that had previously only been available when wearing a jockstrap. Later that year, they introduced the Y-shaped overlapping fly that cemented the garment’s popularity. Coopers renamed the company Jockey, and their “masculine support briefs” were exported to rave reviews in Canada, Europe and throughout the world. (1935)

Happy 76th Birthday to Dolly Parton, the singer-songwriter, actress, author and humanitarian, born in Tennessee and known primarily for her work in country music and her flamboyant looks and bubbly personality.

Born to perform, and doing so from the age of 13, she’s had 25 songs reach No.1 on the Billboard Country charts, but has also topped the Pop charts with titles like Islands in the Stream and 9 to 5. Parton has composed over 3,000 songs, including I Will Always Love You, Jolene, and Coat of Many Colors. She’s the most honored female country performer of all time. Achieving 25 certified gold, platinum, and multi-platinum awards, she has 44 career top 10 country albums—a record for any artist—and 110 career charted singles over the past 40 years.

With sales topping 100 million recordings worldwide, she has poured money into a literacy program, Dolly Parton’s Imagination Library that mails books to children, and other charitable efforts with her Dollywood Foundation. Currently, the program distributes more than 10 million free books to children annually to almost 850,000 children every month. She and her husband have donated to many charities and been married for 54 years. WATCH a fantastic interview in 2020, talking—and singing—about her new coffee table book, Songteller: My Life in Lyrics. (1946)

Parton invested much of her earnings into business ventures across the South, notably the Dollywood theme park and related enterprises, which attract over 3 million people annually. She has received 50 Grammy nominations and won ten, and was also nominated for two Academy Awards, a Tony, and an Emmy. As an actress, she starred in 9 to 5, The Best Little Whorehouse in Texas, Rhinestone, A Smoky Mountain Christmas, Steel Magnolias, Wild Texas Wind, and Joyful Noise. See all her work, including her most recent album, A Holly Dolly Christmas, on Amazon.