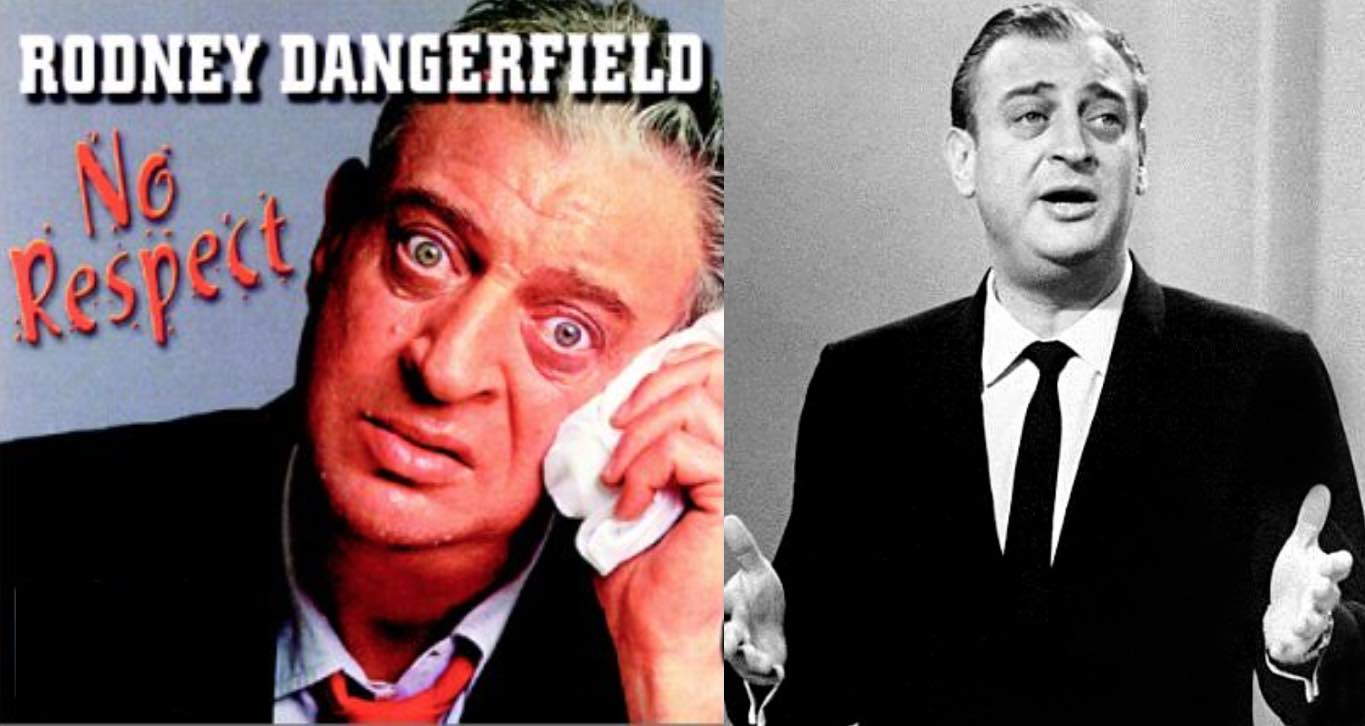 100 years ago today, the memorable comedian Rodney Dangerfield, known for his self-deprecating catchphrase “I get no respect”, was born in Babylon, New York.

After a rough childhood, he became a stand-up comic, and a mainstay on late-night talk shows, with jokes like “I get no respect—I played hide and seek; they wouldn’t even look for me!”

At 47 years old, The Ed Sullivan Show needed a last-minute replacement for another act, and Dangerfield became the surprise hit of the show. He began headlining shows in Las Vegas and appeared often on Sullivan, The Dean Martin Show, and on Johnny Carson’s The Tonight Show more than 70 times.

His breakout film role came in 1980 as rich golfer in Caddyshack, followed by successful movie roles in Easy Money and Back to School. Additional film work kept him busy through the rest of his life, mostly in comedies, but with a rare dramatic role in 1994’s Natural Born Killers as an abusive father.

On the day of Dangerfield’s death from heart troubles at age 82, the randomly generated Joke of the Day on his website happened to be “I tell ya I get no respect from anyone. I bought a cemetery plot. The guy said, ‘There goes the neighborhood!’” This led his wife, Joan Dangerfield, to choose ‘There goes the neighborhood’ as the epitaph on his headstone, which has become so well known that it has been used as a New York Times crossword puzzle clue. WATCH his act that had the President and Kennedy Center in hysterics… (1921)

And, 53 years ago today, The Beatles released their White album, and the world first heard While My Guitar Gently Weeps, Blackbird, and Birthday. The official title, The Beatles, was embossed on the cover and the first 5 million copies of the double LP were numbered, like artists’ prints, with serial numbers. Coming on the successful heels of Sgt. Pepper’s, it was their ninth studio album, and Ringo received the first copy—marked with serial number 0000001. In 2015 he sold it at auction for $790,000 and donated the money to charities.

Julia became the only Beatles song on which Lennon performed alone, according to the Daily Mail, which was fitting because it was about his mother who was killed by a car when Lennon was just 17.

After John Lennon broke band’s policy bringing Yoko to all the rehearsals, Ringo left the band because of the tense environment. Determined to record, Paul McCartney picked up the sticks and did the drumming on the first two songs. His performances were technically perfect, but Ringo returned after getting loving telegrams from his bandmates—and George Harrison covered the studio with flowers to welcome him back. (1968)

And, 131 years ago, Charles de Gaulle was born in Lille, France. A general who had served in both world wars, he led the French resistance against Nazi German occupiers and later was elected president of France. As a statesman, his economic policies of substantial state-directed control over a capitalist economy contributed to thirty years of unprecedented growth. Charles de Gaulle resigned in 1969, but his legacy continues to influence French politics. (1890)

And on this day in 1922, the Tomb of Tutankhamun was opened by archaeologist Howard Carter. With the spotlight of international press, the discovery sparked a renewed interest in ancient Egypt. Called “King Tut”, a wealth of information about the pharaoh who ruled around 1332–1323 BC was provided by the intact mummy and the famous mask, which resides in the Egyptian Museum. CHECK OUT the other treasures uncovered…

And, 87 years ago today, Santa Claus Is Comin’ to Town was first sung on Eddie Cantor’s radio show. The Christmas song, written by John Frederick Coots and Haven Gillespie, became an instant hit with orders for 500,000 copies of sheet music and more than 30,000 records sold within 24 hours. The seasonal standard and has been covered by over 200 recording artists, including the well-known hit sung by Bing Crosby and The Andrews Sisters.

In 1970, Rankin-Bass produced an hour-long animated TV film based on the song, with Fred Astaire on vocals and narrating the story of the origin of Santa Claus. That same year, The Jackson 5 included the song on their best-selling Christmas album. Mariah Carey tried her chords on the song in 1994. But the rocking LIVE recording by Bruce Springsteen & The E Street Band in 1975 is the version that probably receives the heaviest airplay perennially every Christmas—with The Boss teasing the audience, “Everybody out there been good, or what?…Aww, that’s not many—you guys are in trouble out there,” after promising Clarence that if he’d been practicing hard, Santa would bring him ”a new saxophone.”

WATCH the classic TV show conclusion where reminds us all of “Santa’s beautiful lesson” and, then, sings with the Westminster Children’s Choir… (1934)

And, 26 years ago today, Toy Story debuted in American movie theaters. It was the very first feature-length film created entirely using computer-generated animation and it made Pixar studios a household name. It was the directorial debut of John Lasseter, and featured the voices of Tom Hanks, Tim Allen, Don Rickles, and Wallace Shawn, with an Academy Award-nominated original score by Randy Newman.

In a world where toys come to life whenever humans aren’t around, an old-fashioned pull-string cowboy doll named Woody confronts a rival when a new astronaut action figure, Buzz Lightyear arrives on the scene (exclaiming, ‘To Infinity and Beyond’), and each vies for the affections of their young owner Andy.

Grossing over $373 million worldwide, the critically-acclaimed Toy Story holds a rare 100% approval rating on Rotten Tomatoes. With the wit and thematic sophistication of its screenplay (by Joel Cohen, Lasseter, Joss Whedon, and others) it earned an Academy Award nomination—the first-ever animated film to be honored in a writing category. WATCH some highlights… (1995)