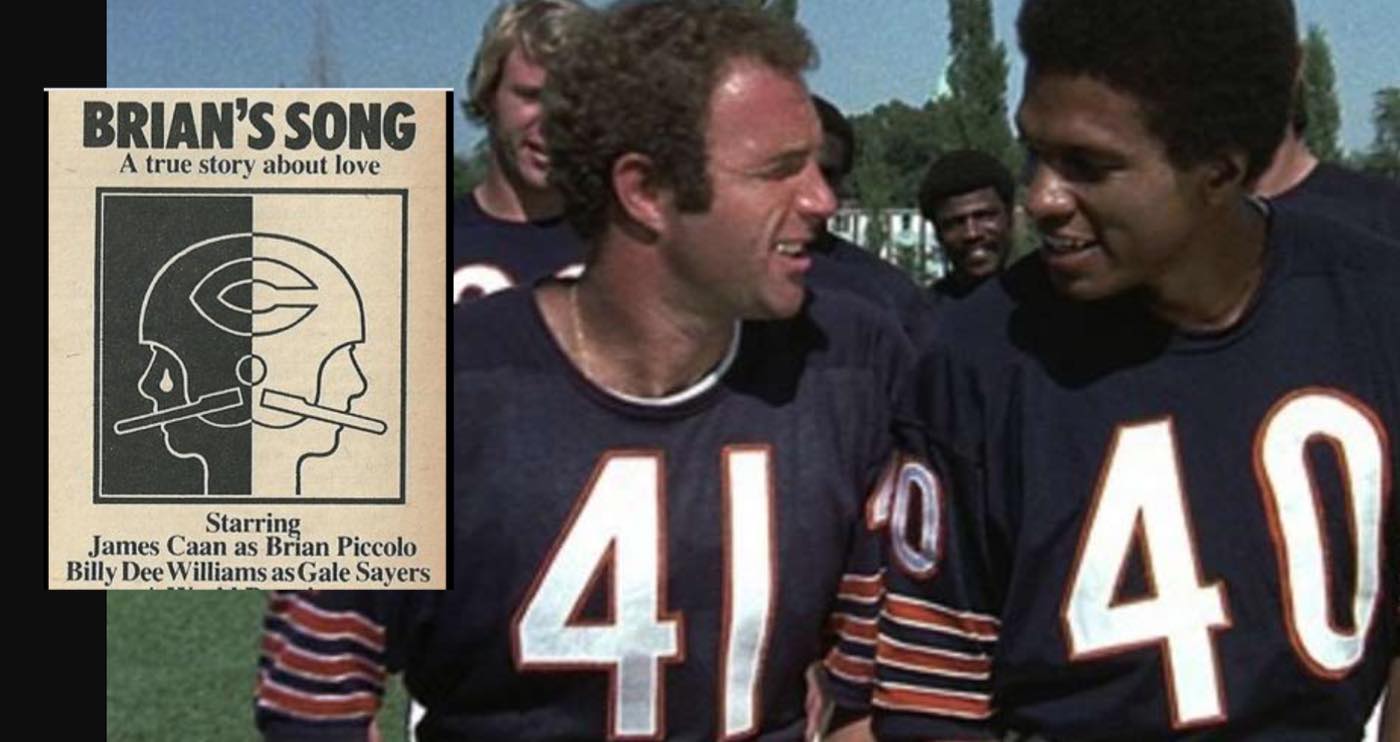 50 years ago today, Brian’s Song, about the friendship of Chicago Bears football teammates Brian Piccolo and Gale Sayers premiered on ABC in the U.S.. Starring James Caan and Billie Dee Williams, the TV movie based on Sayers’ autobiography (I Am Third), won a Grammy, a Peabody, and 5 Emmy Awards.

The story recounts the details of Brian Piccolo’s life, the NFL pro athlete stricken with terminal cancer in 1965.

Piccolo’s and Sayers’ sharply differing temperaments and racial backgrounds made them unlikely buddies in the 60s, but they became the first interracial roommates in NFL history, and Brian’s Song chronicles the evolution of their friendship, ending with Piccolo’s death. A huge success on TV, critics have called the movie one of the finest telefilms ever made. A definite “guy-cry” flick, it steered clear of overt sentimentality while expressing the genuine affection that the two men felt so deeply. WATCH the trailer… (1971)

Though he developed a lisp and stutter while spending a lot of time away from his parents, he played with army men, and went on to become a Major in the 2nd Battalion of the Grenadier Guards—and later, as the nation’s leader during her darkest time, led Britain to victory in World War II, giving inspiring speeches that encouraged bravery and endurance. He became the first Honorary Citizen of the United States and later the first British Prime Minister to win the Nobel Prize in Literature.

And, 21 years ago today, the Parliament instituted the Countryside and Rights of Way Act in England and Wales.

This ‘Right to Roam’ Act also led to a formalized Scottish version, preserving the tradition of unhindered access to uncultivated countryside, provided care is taken not to cause damage or interfere with farming and hunting. The act’s force (jus spatiandi) was applied to areas of ‘mountain, moor, heath and down’ in addition to registered common land. (2000)

And, 39 years ago today, Michael Jackson’s Thriller LP was released. Produced by Quincy Jones, and featuring a duet with Paul McCartney, it became the world’s best-selling album of all time, with estimated sales of 66 million copies. The first to be certified 33× multi-platinum, the album won a record-breaking eight Grammy Awards, with 7 top 10 singles, including Billie Jean, Beat It, The Girl Is Mine and Wanna Be Startin’ Somethin’—all of which Jackson wrote. (1982)

And, on this day in 1968, Glen Campbell’s album ‘Wichita Lineman’ hit #1 on the US album chart. The inspiration for that title song’s lyrics came to Jimmy Webb while he was driving through Washita County, Oklahoma. He was observing “an endless litany of telephone poles, each looking exactly the same.” Then, in the distance, he noticed the silhouette of a solitary lineman atop a pole—the picture of loneliness. Webb then imagined what the man might be saying into the phone. When the famed country singer who was hoping for another song like ‘By the Time I Get to Phoenix’ heard the tune that was written for him, he cried.

Dozens of other artists, like James Taylor and, guitarist Johnny A., have covered the timeless ballad. Coincidentally, Campbell also played his very last live performance in 2012 on November 30.