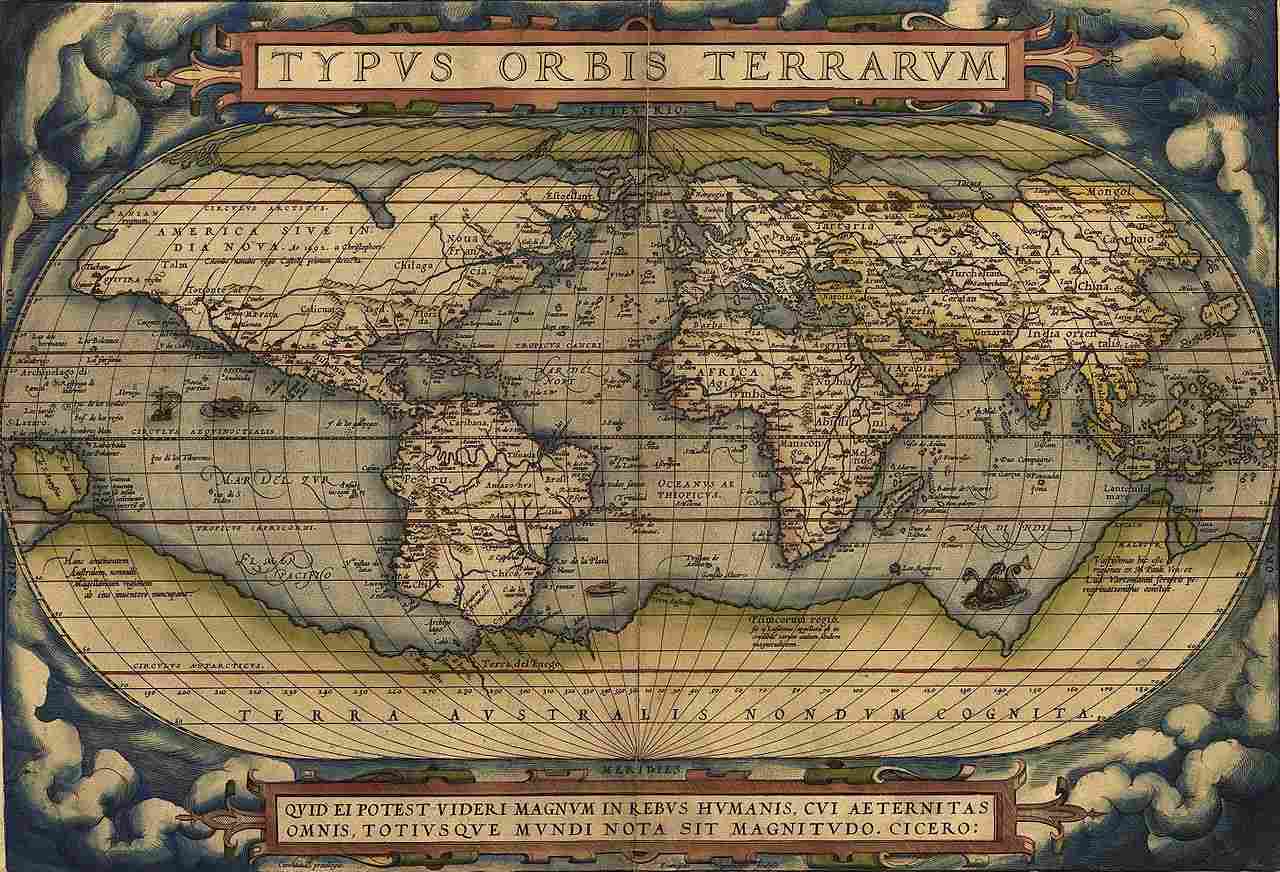 452 years ago today, Belgian Cartographer Abraham Ortelius published the Theatrum Orbis Terrarum, the first world atlas. It consisted of a collection of uniform map sheets and supporting text bound to form a book for which copper printing plates were specifically engraved, and got pretty much all the shapes of all the continents horribly wrong except Africa which is remarkably accurate. It turns out there was a Golden Age of Netherlandish Cartography, and it’s reckoned Theatrum Orbis Terrarum was its overture. READ about this Golden Age… (1570)

Ortelius traveled extensively throughout his life, all across Europe. He was a guild member in Antwerp trading in books, manuals, maps, and more, and he eventually put together the atlas at the urging of his friend. To do so he used 53 maps, and attributed all of his reproductions of them to 83 authors, whom he diligently named. The first edition was published in Latin, with Dutch, French, and German editions to follow, along with 17 additional maps after the Theatrum was met with great commercial interest from the upper classes of Europe.

This launched the Golden Age of Netherlandish Cartography, taking advantage of the two-hundred years during which the Dutch dominated world trade, and visited every corner of the earth. For roughly a century, from 1570 to 1670, the maps, charts, and globes issued during this period, at first mainly in Antwerp and later in Amsterdam, are distinguished not only by their accuracy according to the knowledge of the time, but also by their richness of ornamentation.

Happy Birthday to Cher, who turns 76 today. The actress, dancer, and singer has sold over 100 million records.

The ‘Goddess of Pop’, with her distinctively resonant contralto voice, reached the top of the charts in 1965 with the Sonny & Cher hit, I Got You Babe, and in her solo career with four No.1 singles, Gypsys, Tramps & Thieves, Half-Breed, Dark Lady, and Believe.

Her music won a Grammy, her fashion style won our attention, but she’s also earned an Emmy, 3 Golden Globes, and an Oscar—for Best Actress in Moonstruck. Cher is the only artist with a No.1 single on a Billboard chart in six consecutive decades, from the 60s to the 2010s.

The superstar got involved in helping save an elephant stuck in an Islamabad zoo under terrible conditions, as GNN reported, and the Smithsonian Channel just debuted a documentary about the 4-year effort to save Kaavan. Called, Cher & the Loneliest Elephant, it shows film of her November visit to the animal’s new home, serenading him with lines from the song My Way.

Adding to a list of her philanthropic contributions (she paid for a shipment of water to the people of Flint, Michigan), Cher and a charity supergroup spawned a UK top-ten single last November called Stop Crying Your Heart Out, an Oasis cover, with all proceeds supporting children in need.

Yesterday Cher announced on Twitter that an official biopic of her life is in the works, with Universal studios employing Eric Roth as scriptwriter (Forrest Gump), and the “Mamma Mia!” producers. WATCH her sing My Way to an elephant… (1946)

And, on this day in 1908, the beloved actor Jimmy Stewart was born. Any number of his movies are included among the greatest American films of all time, particularly Mr. Smith Goes to Washington; It’s a Wonderful Life; Harvey; and the Hitchcock-directed Rear Window, and Vertigo. Known for his distinctive drawl and down-to-earth persona, he often portrayed middle-class men struggling in crisis. Equally at home in Westerns, thrillers, biographies, and family films, he also had keen comedic timing, as seen in The Philadelphia Story, for which he won his only Oscar among five nominations.

Married for 45 years, he also won honors in war—as a World War II pilot and Vietnam War veteran—rising to the rank of Brigadier General in the Air Force. He sacrificed 5 years in the prime of his acting career to serve his country. Not only that, he had been offered a safe post, as all celebrities were (because their death would be a huge blow to the nations’s morale), but he refused and instead flew more than a dozen dangerous bombing missions. WATCH a tribute, or see his personality shine during his 1980 acceptance speech…

And, 106 years ago today, the first Norman Rockwell painting appeared on the cover of The Saturday Evening Post. The oil on canvas, Boy with Baby Carriage (or ‘Home Duty’), was an instant success.

Although he got his start at age 18 when he was hired as a staff artist for Boys’ Life magazine, it was this illustration that propelled Rockwell on the road to financial and artistic success, and popular acclaim. When he got the cover, he crooned: “Two million subscribers and then their wives, sons, daughters, aunts, uncles, friends. Wow!” he said, when the possibility of a Post cover arose. He accomplished the coveted feat at the age of twenty-two.

Among the best-known of Rockwell’s works are the Four Freedoms, a series that illustrated President Franklin Roosevelt’s vision for why America would fight in WWII. Born in New York City, and living most of his life in Stockbridge, Massachusetts, the artist produced more than four thousand original works in his lifetime. He also wrote an autobiography, My Adventures as an Illustrator, and is noted for his 64-year relationship with the Boy Scouts. Rockwell passed away in 1978 at the age of 83. (1916)

The 40th president of Uruguay became legendary for giving 90 percent of his salary to the poor, choosing to live on his austere farm (instead of the presidential palace), and using an old VW Beetle to get around town. He left office in March, 2015 due to his country’s one-term limit for presidents. (1935)

With more than 55 different stories in the time-travel adventure series, the chapter books written for readers ages 6–10 have sold more than 134 million copies worldwide in 35 languages. An advocate and supporter of children’s literacy, the Oklahoma native is also coauthor of the companion Magic Tree House Fact Trackers series with her husband, playwright Will Osborne, and her sister Natalie. WATCH a 2017 video about the 25th anniversary of Magic Tree House… (1949)