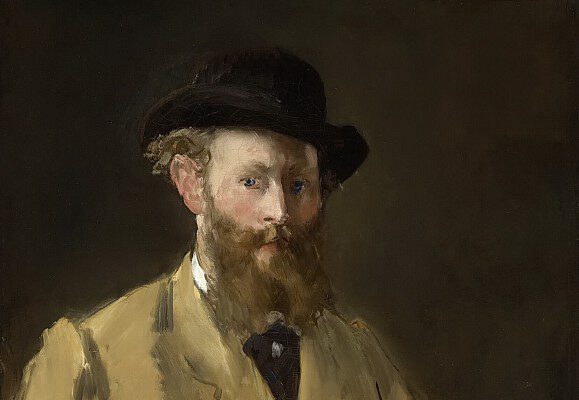 Happy 190th birthday to the father of impressionism, Edouard Manet, who was born in Paris and grew up to reject the legal career imagined for him to inspire the transition from the realist to the impressionist styles. His early masterworks, The Luncheon on the Grass (Le déjeuner sur l’herbe) and Olympia, both 1863, caused great controversy and served as rallying points for the young painters who would create Impressionism. Today, these are considered watershed paintings that mark the start of modern art. The last 20 years of Manet’s life saw him form bonds with other great artists of the time, such as Claude Monet, and develop his own simple and direct style that would be heralded as innovative and serve as a major influence for future painters… SEE his works, and learn more. (1832)

Edgar Degas, a famous impressionist master, said at Manet’s funeral that his gigantic scale as an artist could not be conscious by contemporaries, perhaps because Manet’s extreme focus on everyday life was seen as unimaginative. In his paintings, the “randomness” of the chosen moment was specially emphasized by the composition, which abounds with cuts of figures and objects, suggesting in this case the possibility of continuing the image outside the canvas.

He also was an autodidact, and studied largely through quiet and detailed observation of the works within his native Louvre, but also the finest galleries in Holland, Italy, Germany, and Spain.

And, 173 years ago today, Elizabeth Blackwell became the first woman doctor in the United States. The local press boasted about the gender pioneer who graduated after becoming the first woman in the country to attend medical school. She chose the field after her friend fell ill and suggested that if a female doctor had cared for her, she might not have suffered so much.

As a woman, Elizabeth Blackwell endured a lot of prejudice, as she was rejected from every medical school except one—Geneva College in New York (now, Hobart and William Smith Colleges). On graduation day, when the British-born student was receiving her diploma, the school’s dean, Dr. Charles Lee, stood up and bowed to her. (1849)

And, on this day 79 years ago, the classic film Casablanca premiered on screens across the US.

Beloved for the onscreen chemistry between the two lead actors, Humphrey Bogart and Ingrid Bergman, the film won three Academy Awards, including best picture, screenplay, and director – for Michael Curtiz. The signature line, “Here’s looking at you, kid,” was ranked No. 5 on AFI’s list of 100 greatest movie quotes of all time. Named for the North African city where the story is set, Casablanca left us with other unforgettable lines from the World War II Resistance drama: Of all the gin joints in all the towns in all the world, she walks into mine; The problems of three little people don’t amount to a hill of beans in this crazy world; I think this is the beginning of a beautiful friendship; and perhaps the best closing line in cinema—We’ll always have Paris, uttered by Rick before he sends Lisa off in an airplane, with the romantic theme song, As Time Goes By, playing amidst the fog. WATCH an anniversary tribute from CBS Sunday Morning.

Ingrid Bergman dished, “I watched the film the other day after not seeing it for a long time, and it was amazing how good that picture was.” (1943)

And, happy 71st Birthday to Captain Chesley Sullenberger who, in 2009, safely landed a jet airliner in the Hudson River saving all 155 passengers on board—and avoiding a disastrous crash into Manhattan.

The plane hit a flock of birds right after takeoff that knocked out both engines while 3,000 feet in the air. Nicknamed ‘Sully’, the Captain is retired from aviation now, but works as an author, speaker, and consultant.

In response to worldwide celebration of the incident he said, “I realized how this event had touched people’s lives, how ready they were for good news, how much they wanted to feel hopeful again,” said Sully afterward. “We’ve had a worldwide economic downturn, and people are just so ready for good news. They want to feel reassured that all the things we value, all our ideals, still exist.”

Actor Tom Hanks portrayed the pilot in Sully, a film about the ‘Miracle on the Hudson’. WATCH a spine-tingling Smithsonian video recreation of those 200 seconds… (1951)

Also, 112 years ago today, the great jazz guitarist and composer Django Reinhardt was born. Regarded as one of the most influential musicians of the twentieth century, the Belgian-born Romani-French musician is known for playing with only two fingers. Here’s why: Reinhardt spent his youth in Romani encampments near Paris, where he played violin, banjo, and guitar. When he was 18 he was terribly burned in an accident that hospitalized him for 18 months and badly damaged the third finger (ring finger) and fourth finger (pinky) of Reinhardt’s left hand. Doctors believed he would never play guitar well again, but he regained his musical mastery by developing a radical method to play using his two remaining fingers.

With violinist Stéphane Grappelli, Reinhardt formed the Hot Club of France in 1934, a jazz group that was among the first to feature a guitar as lead instrument. It was the most accomplished and innovative European jazz band of the period.

He also played with American luminaries like Louis Armstrong and Duke Ellington. Despite never learning to read music, he experimented with classical composition, writing a Mass for the Gypsies, and a symphony—using an assistant to notate what he was improvising. One of his songs, Nuages, became an unofficial anthem in Paris to signify hope for liberation during the Nazi occupation in WWII. He was playing there throughout the war, but never rounded up, even though he was Romani. Django died suddenly of a stroke at age 43 in 1953. Charlie Byrd, among other jazz greats, called Reinhardt his primary influence. WATCH rare footage below of his lightening fast fingers… (1910)

(NOTE: Parental discretion may be advised during the last half of this biography when they describe his later personal choices…)