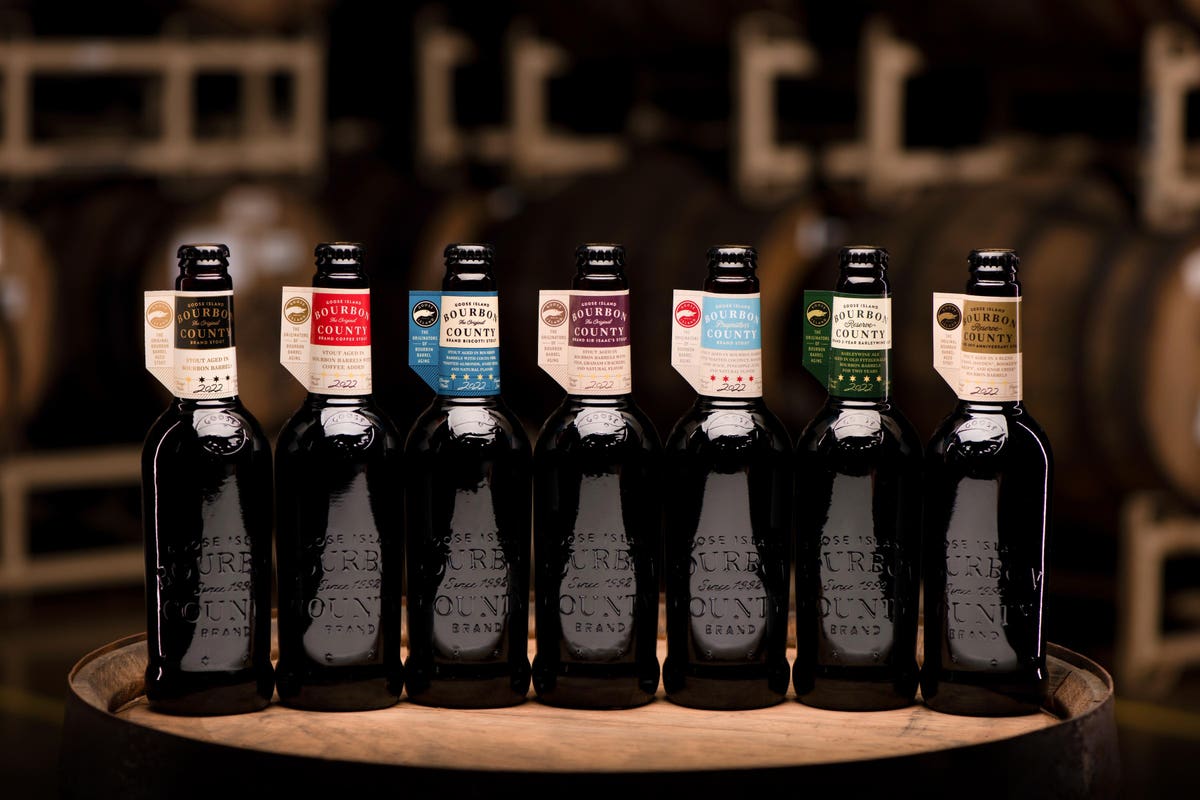 “You know you’re a part of something special , when each year crafting Bourbon County Stout is more fulfilling than the last, especially since starting out we never thought we’d make it again,” says Todd Ahsmann, president of Goose Island Beer Co. “Yet, 30 years later, it’s clear we’ve created something truly remarkable.”

Which variant will prove to be the most sought after is yet to be determined, but here’s the rundown on each of them.

The Goose Island Bourbon County Stout should be self-evident. “Every year since its inception in 1992, we strive to honor the original Bourbon County Stout recipe,” Ahsmann says. “And, 30 years later, we continue Gregory Hall’s legacy and passion for making the best beer possible, starting with the best barrels the bourbon trail has to offer.” This year, the stout aged and blended from freshly emptied bourbon barrels from Heaven Hill, Four Roses, Wild Turkey, and Buffalo Trace distilleries. Expect flavors of vanilla, dark chocolate, toffee, molasses, almond, and dried fruit.

For the Two-Year Barleywine Reserve, the brewery worked with Old Fitzgerald to garner three sets of barrels of varying ages – 14, 16 and 17-year-old barrels – from the distillery’s Old Fitzgerald’s Bottled-In-Bond Decanter Series. “Our Two-year Barleywine Reserve brings back an old favorite in an amazingly new way with barrels from a legendary bourbon,” says Mike Siegel, senior innovation manager. “For the first time, concepts for variants were created by people outside of the operations side of the brewery. Bourbon County lovers in our Goose family that usually don’t get involved with creating beer won us over with their great ideas.” Expect a velvety taste of rich malt, entwined with notes of toffee, cherry, vanilla, fig, and almond.

For the 30th Anniversary Reserve, the brewery wanted “to pay homage to the serendipitous union between between Gregory Hall and Booker Noe that then led to subsequent years, variants, and traditions.” This means that it is aged – from a blend of Jim Beam barrels from their Small Batch Bourbon Collection barrels. And, as history would have it, Jim Beam launched their first-ever Small Batch Bourbon Collection 30 years ago. “This 30th Anniversary Reserve Stout is a culmination signifying the historical, groundbreaking shifts in both the bourbon and beer industries from two visionaries all those years ago,” Ahsmann says. “Both the concept of small batch bourbons and bourbon barrel-aged beers have changed our respective drinking communities forever.” Expect notes of dark chocolate, vanilla, cherry, and almond.

Inspired by the Italian desserts of her childhood, Jill Cerone, people manager at Goose Island, dreamed up the Bourbon County Biscotti State after grabbing a box of chocolate-dipped cookies from her cabinet. “Being Italian American and having geeked out over 2020 Proprietor’s Stout, I knew that it was the perfect flavor combination for another Italian-inspired variant,” Cerone says. “Anise and almonds are common ingredients in some of my favorite Italian desserts and baked goods, and the flavors combined bring back so many memories of baking with my mom and enjoying a plate (or two) of cookies at family gatherings.” Expect notes of anise, marzipan, cocoa, and buttered toffee.

Bourbon County Sir Isaac’s Stout was crafted by Melissa Alleguez and Ryan Huron, members of the Goose Island E-commerce team. Inspired by Alleguez’s memories of stealing fig cookies out of her grandma’s cookie jar during her summers on Lake Michigan, this stout had 10,000 pounds of black mission figs used in its crafting. “We wanted to dive deeper into the notes of dried fruit and added graham cracker for balance,” she says. “Ryan is a huge beer nerd in general and knew this was a unique concept for BCS so we just had to throw it back to those childhood cookies always stocked in the cookie jar.” Expect flavors of dried fruit, honey, molasses and citrus – just like the cookies that inspired it.

A love for cocktails led brewers Jason Krasowski and Paul Cade to create the Proprietor’s Stout. The two spent a night on the town, tasting some of the best cocktails in Chicago. The result is a brewer’s take on a jungle bird cocktail. “We challenged ourselves to create a recipe that nods to a night full of friendship and laughter in Chicago and also uses innovative flavors,” says Krasowski. Expect coconut, lime and pineapple.