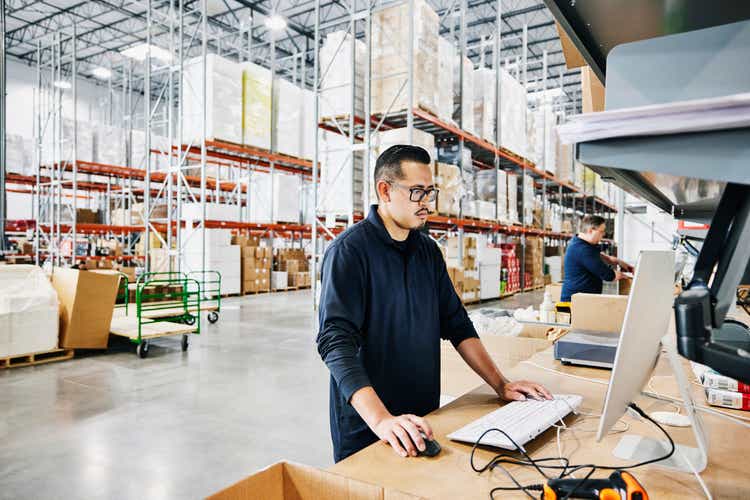 After successfully spinning off from XPO Logistics, Inc. (XPO) at the beginning of August 2021, GXO Logistics (NYSE:GXO) share price is yet to stabilize, losing 63.76% in the one-year analysis. The company is working to become a formidable pure-play contract logistics provider and has grown its revenue by 15% (Y/Y) at $2.3 billion as of Q3 2022. In 2021, the market size of the U.S retail supply chain logistics was valued at $43.17 billion and is expected to grow at a compound annual growth rate (CAGR) of 11% from 2022 to 2030. High demand in the post-pandemic environment is expected to propel growth in the sector, with most end-use industries in need of external inventory management, packaging, and delivery.

GXO Logistics’ had a record performance in Q3 2022 driven by three key tailwinds; strategic partnerships, automation, and e-commerce. The company has a footprint for growth in 2023 and even raised its guidance for both organic revenue and adjusted EBITDA for 2022. GXO’s management is optimistic about retaining its customer base that rose in Q2 2022 to settle in the high 90s. However, the management is just one-year-old post-spin-off and will be expected to release more data on new business wins including contract macro-dynamics in versatile markets such as Europe.

In its Q3 2022 earnings report, GXO Logistics affirmed its 12% to 16% organic revenue growth for 2022 up from 11% to 15% after attaining a 16% (YoY) revenue growth at $2.3 billion. The company has been posting record earnings post-spin with its adjusted net income at a high of $89 million indicating a rise of 36.9% (YoY) from $65 million realized in Q3 2021. On the contrary, XPO’s revenue fell 2% short at $3.04 billion in Q3 2022 against consensus estimates of $3.1 billion. XPO is getting into a new era after the spin-off of GXO which was the company’s contract logistics operator. It now has the less-than-truckload (LTL) segment and also announced an intention to spin off its tech-enabled brokered transport section RXO before 2023.

GXO Logistics has maintained robust earnings despite the acquisition of key businesses into 2023 such as Clipper Logistics. In the 9 months leading to September 2022, GXO spent $874 million bringing the total capital expenditure to $1.056 billion up 654% (YoY).

GXO is riding on a wave of higher shipment and tonnage numbers despite the volatile inflationary environment. This performance is attributed to two key acquisitions made by the company between 2021 and 2022. The company acquired Clipper Logistics in May 2022 for $1.3 billion (in a cash/ share deal) having received a complete review by the UK’s Competition and Markets Authority (CMA) in Q3 2022. With this approval, GXO is now expected to reap a huge share of the planned synergies in 2023 and 2024.

From an investment standpoint, GXO’s acquisition of Clipper brings in more than an additional geographical presence. Clipper boasted of an annual turnover of£650 million with over 10,000 highly-skilled workers. It operated in 55 European sites (from its headquarters in Leeds), with at least 11.8 square feet of warehousing space and over 350 vehicles. Overall, GXO is acquiring assets worth $918 million against total liabilities at $663 million leaving out the company with a positive book value of more than $250 million.

Apart from Clipper, GXO also announced that it had renewed its long-standing contract with Manchester Airport, a move that would help both businesses to scale up. There is increasing demand across Europe with the GXO/ Manchester Airport business supporting more than 70 retailers, food/ beverage vendors, restaurants, and stores.

Earlier in 2021, GXO had acquired the majority of Kuehne + Nagel’s contract logistics operations in the UK. In the 9 months to September 2022, Kuehne Nagel’s net turnover hit CHF 30.6 billion up 40% (YoY) from CHF 21.841 billion in 2021. The company’s EBIT rose 71% (YoY) to CHF 3.1 billion with net earnings growing 73% (Y/Y) to CHF 2.3 billion. In my view, the company has performed well despite the high energy prices, runaway inflation, and geopolitical tensions caused by the Russia-Ukraine war. It appears GXO intends to tighten its grip in North America, the UK, and Europe by extension.

GXO Logistics has an incredible opportunity in automation since most of its customers are grappling with inefficiencies in warehousing versus their competition. As a result, they desire effective supply chain logistical experts with technological proficiencies to bring them into the “warehouse of the future experience.”

Technology continues to play a vital role in GXO’s logistical solution since it boasts a tailored IT system. This system can track and trace goods in real-time thereby ensuring resource planning and saving. In its deal with Manchester Airport, GXO supports the airport’s retail community by restocking its outlets with the right merchandise at every turn thereby maximizing revenues. It is no wonder that the logistical company has provided business support to the airport for the past 16 years. At the airport, GXO delivers at least a million items on an annual basis while operating a 29,000 sq. foot service center. The goal of such an operation is to reduce vehicle movements by 75% since it is described as the third busiest airport in the UK and the busiest outside London.

In Q2 2022, GXO attributed about 60% of its contract wins and about 30% of its revenue to highly automated sites.

Total technology automated systems in the company have since grown 43% (QoQ). As expected, the company stands to make more money on contracts attached to automation as opposed to those that are less automated. In essence, GXO will be charging a margin (while bidding for the contract) of a higher cost. The 18.5% (YoY) growth in the adjusted EBITDA is a reflection of the growth of technological demand expected from the company.

While releasing the results, CEO Malcolm Wilson opined, that

Looking beyond peak, we are confident for 2023 and expect to deliver notable growth. Our global pipeline is strong, our conversion rates remain high, and demand for the types of technology we provide is only accelerating. Based on our wins to date, we’ve already secured nearly half of a billion dollars of incremental revenue for next year, further strengthening our visibility for 2023.”

From this viewpoint, it can be seen that GXO’s management is not just hyping its value proposition considering its technology-driven pipeline is expected to deliver margins in the long run.

In the Netherlands, GXO announced that it had partnered with JD Sports for their European Omnichannel logistics setup. From its 646,000 sq. foot facility located in Heerlen, Netherlands, GXO will carry out all its fulfillment activities serving at least 3,300 shops across 32 countries in Europe. Earlier on in Q2 2022, GXO announced that it was winning new business with international brands and omnichannel retailers such as Lacoste , L’Oreal, PepsiCo, and Dolce & Gabbana among others. I believe that these brands were taken through GXO’s return centers where they were convinced that the company can capitalize on getting about 100% of their products into the market.

Retail inventory levels especially in the U.S. are still high post-Covid. A recent survey by Morgan Stanley indicated that net ordering levels were down 40% (YoY) with a 19% discrepancy between inventory and sales growth. Customers are also grappling with the effects of inflation that may hamper GXO’s sales heading into 2023.

I believe that the increased organic revenue growth witnessed in Q3 2022 may mean some deceleration, especially in the first half of 2023. The rate of return for new acquisitions such as Clipper Logistics may not occur as fast as expected. In the 3 and 6 months ending on June 30, 2022, Clipper’s revenue stood at $80 million against income (before taxes) at $1 million respectively. GXO Logistics spent $1.3 billion in this deal and it will take a while to recoup the amount spent in the acquisition.

At the beginning of 2022, GXO indicated that it would maintain a countercyclical free-cash-flow system where 2% of its sales would be used as capital expenditure (and working capital). However, as of Q3 2022, GXO’s free cash flow generation declined 6% (YoY) to $47 million from $50 million realized in Q3 2021. Net cash used in investing activities also grew 650% (in the 9 months leading to September 30, 2022) against $140 million noted in 2021. With its revenue at $2.3 billion, it means that the CapEx rose towards the 50% mark of total sales realized in the quarter. However, this increase was partially offset by a 25% growth in the net cash generated from operating activities that rose 25% (in the 9 months leading to September 30, 2022) to $316 million from $251 million generated by the same time in 2021.

GXO Logistics entered its second half of 2022 with a 16% growth in organic revenue, new contractual agreements, and overall business growth. The company is expanding from its North American operation to Europe with new businesses in Britain and Netherlands. Further, the acquisition of Clipper Logistics and contract extensions with Manchester Airport will help increase revenue into 2023. However, the acquisition of Clipper and Kuenhe Nagel will take time before attaining business stability. Still, GXO has proven its ability to navigate the supply-chain complexities post-Covid, elevated inventory levels, and high inflation with its seamless logistical tech-driven management. For these reasons, we propose a hold rating for GXO Logistics, Inc. stock.