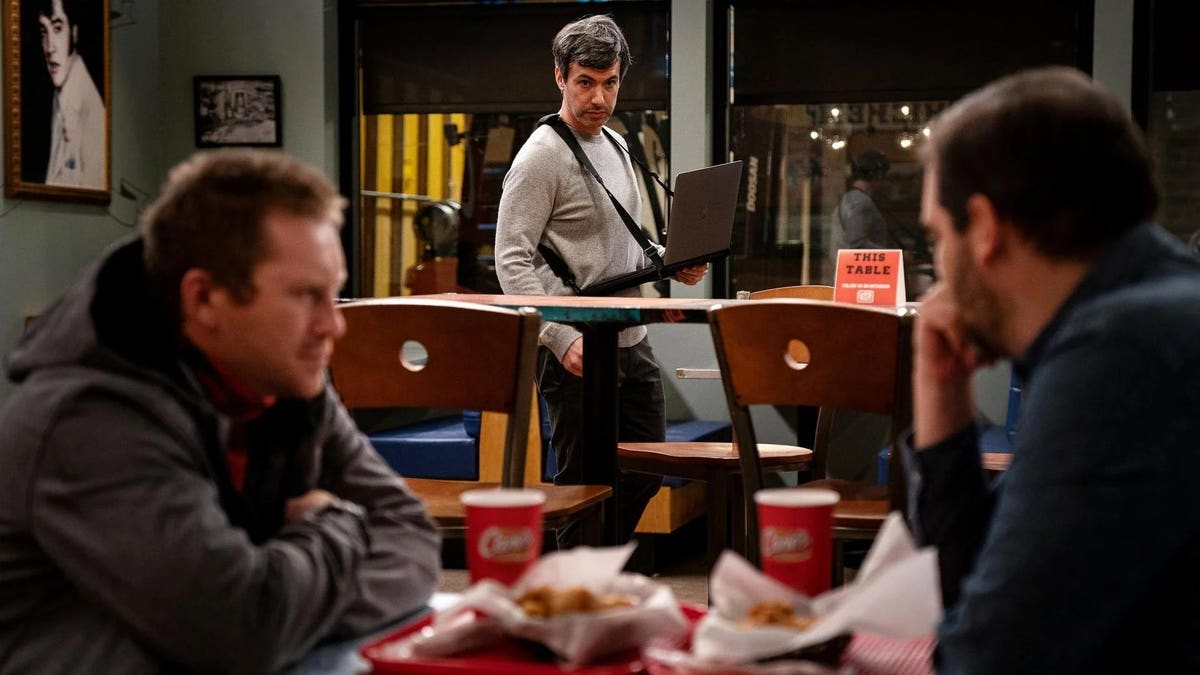 Nathan Fielder continues his surreal stint as a parent to “Adam,” and husband to Angela, who is happily living out her tradwife fantasy on easy mode, enjoying the benefits of a nanny, and seemingly, awkwardly avoiding Nathan.

Frankly, the parenting rehearsal is already getting a little stale, but Nathan has an intriguing side-project in “Patrick,” a man who needs to rehearse a difficult conversation with his brother, to demand his rightful share of their grandfather’s inheritance.

Their grandfather’s will apparently stipulates that Patrick can’t receive his inheritance if he’s dating a “gold digger,” and Patrick’s brother has since applied the label to every single one of his girlfriends.

Patrick is introduced as a typical Nathan Fielder subject, an oddball who carries his grandfather’s ashes in a necklace that includes a chunky Punisher keyring, casually dropping antisemitic comments during his rehearsal.

Nathan’s novel new idea is to add an extra dimension to the illusion, imbuing the rehearsal with real emotion by having Patrick be involved in another inheritance battle, with the actor playing Patrick’s brother withholding the new inheritance, using the girlfriend “gold digger” excuse.

It’s another layer of deception that goes far beyond what we’ve seen in the show so far, as Nathan orchestrates an emotional bonding session between Patrick and the actor’s fake grandfather, who “dies” days after Patrick helps dig up his buried gold – at one point, Patrick even helps the old man with a bathroom emergency.

That scatological detail is inspired by a comment made by Patrick during rehearsal, when he talks about how much he helped his own grandfather during his final years, even helping him wipe his bottom when needed. Despite Patrick’s unflattering introduction, the anecdote really highlighted the tragedy of this absurd inheritance situation – one can’t help but sympathize with him.

Hence, things get pretty uncomfortable when Patrick is told about the fake death of the elderly actor, and is then told that he cannot receive his share of the gold because his girlfriend is a “gold digger.”

Perhaps it says a lot about Patrick that he doesn’t see through the deception (it’s pretty on the nose, even for Nathan), but the ridiculous set-up sparks a hell of an emotional reaction. Reality rudely crashes into the illusion, as Patrick speaks to the actor as though he really is face-to-face with his brother, tearing up as he admits to not being able to grieve, expressing a deep desire just to be done with the ugly battle.

The actor, thankfully, gives Patrick the OK, and the two share a tight hug; it’s strangely beautiful, although there’s an uneasy sense that this moment of catharsis might not be possible in the real world. The fact that Nathan’s bonkers idea actually worked is a surprise, but it’s unclear if Nathan helped Patrick, or simply worsened the situation.

Either way, we don’t get to know – Patrick doesn’t show up for the next rehearsal, and Nathan’s monotone voiceover claims that he never heard from him again. It’s a spectacular piece of television, sure, but it’s pretty damn bleak; The Rehearsal is certainly challenging viewers to question their own complicity in the emotional torture of the show’s participants, along with Nathan’s techniques.

Back at Angela’s homestead, Nathan continues to awkwardly exist among “Adam” and Angela, their only real conversation being Nathan challenging Angela’s hilariously deluded views on Halloween and Satanism, in which Angela casually states that Google is controlled by the Devil himself.

The episode ends with “Adam” being swapped for a much older child, a six-year old, and Nathan admitting that the illusion is beginning to falter, even if it sometimes feels convincing. To help assist the time skips, the mirrors in the house are replaced with digital screens that place aging filters over Nathan’s reflection, while the vegetable garden is bursting with store-bought produce.

It’s only episode 3, and we’ve barely scratched the surface of Nathan’s labyrinth of rabbit holes; the scenarios are growing more uncomfortable, and yet, more intriguing.