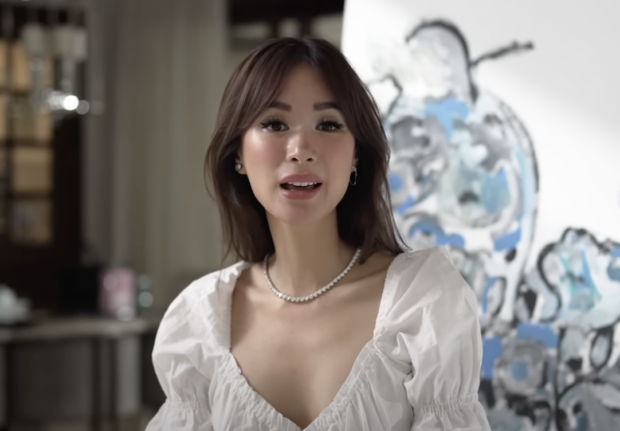 Heart Evangelista opened up about her paintings and how her emotions including “depression, anxiety, happiness, fear and sadness” were the inspirations behind her recent artworks.

The actress gave fans a peek at her doing a painting as part of her “workday,” stating that such activity reflects the “core of her heart,” as seen in a vlog on her YouTube channel yesterday, Oct. 15.

Evangelista recounted how she started painting at a young age and how her dad let her paint the walls of their house despite her mom getting angry. She then spoke about how she is currently “rediscovering” herself when it comes to her craft.

“I love Paul Klee, Frida Kahlo, I also love Matisse — growing up, I was also a Gustav Klimt fan. But as life developed and all of that, you start to realize that there are just so many things you need to do, so many rules you need to follow, so many things that you cannot do that you just wanna do freestyle,” she said.

Evangelista noted how painting has been “liberating” and “therapeutic” for her as an actor whose life is somehow “directed.” The actress also disclosed how she has become drawn to painting women because she can illustrate her emotions through their facial expressions.

“It’s so liberating to do freestyle and just do whatever you want. So basically, my inspiration these days would be random emotions, whether that’s depression, anxiety, happiness, fear, sadness — and I think there is something really beautiful about melancholic moments,” she stated.

“I felt like the best way for me to convey an emotion or a feeling was to paint a woman. So, a woman would basically represent my state of mind at that specific time,” she added.

Evangelista’s relationship with her husband, Sen. Francis “Chiz” Escudero, has been hounded with breakup speculations, which arose when she removed the surname Escudero from her Instagram profile name. Evangelista also reportedly moved out of her shared home with Escudero.

The actress subsequently revealed that she bought a new apartment, adding that she will be staying abroad “indefinitely.” Evangelista may have also further fueled the split rumors after she did not greet Escudero on his birthday last Oct. 10. EDV