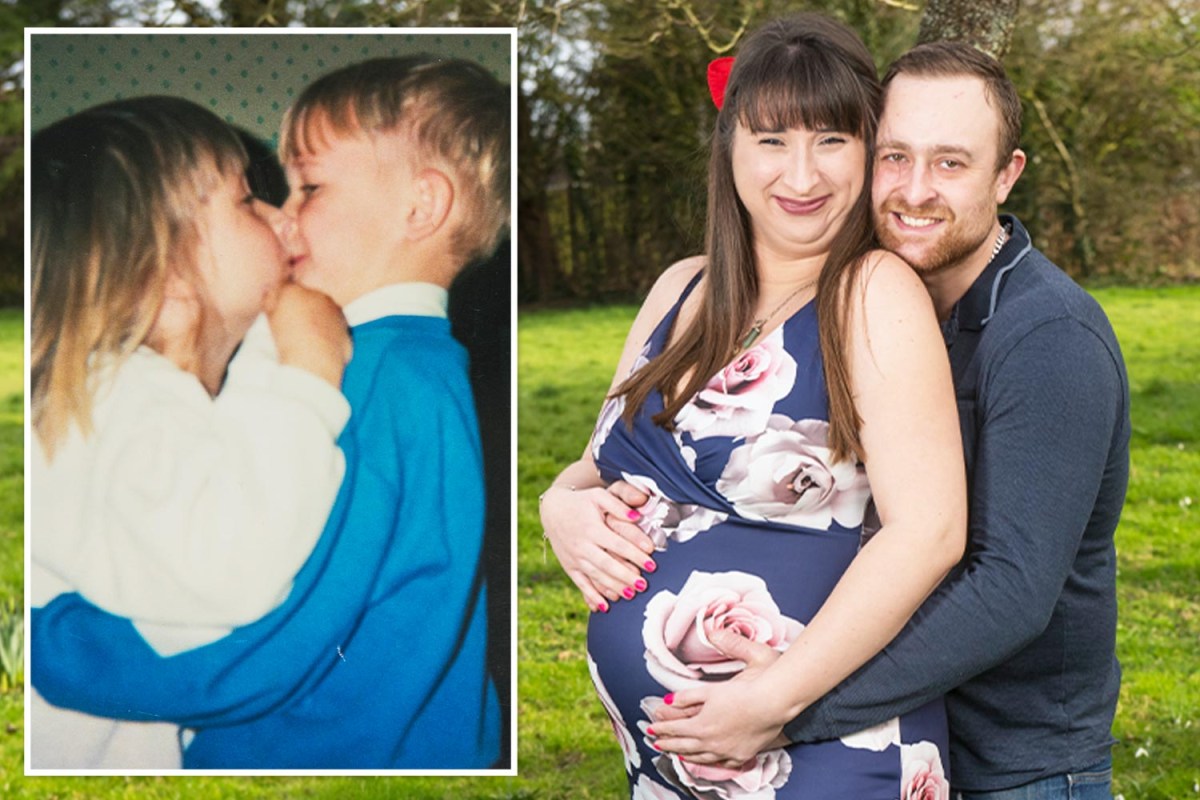 AS we celebrate Valentine’s Day tomorrow, this couple’s love story is sure to pull on the nation’s heartstrings.

Carer Hope Waters, 28, knew Ryan Newton, 30, a mechanic, was The One when she was just three years old.

But it took two decades and a double tragedy to finally bring them together.

Now they tell Susan Hill how, against the odds, they are set to become parents to a little boy.

We also reveal the celebs readers would most like to be with on the most romantic day of the year, what your flower choice says about you and the romantic gestures that flopped.

I HAVE loved Ryan ever since I was a little girl.

He is two years older than me but we were joined at the hip from when we were tiny because my mum, Anna, and his mum Annette were best friends.

We all lived in Poole, just a couple of miles apart. Our mums spent all their time together and so did we.

I will never forget our first kiss. We were at Ryan’s nan’s house.

I just ran up and kissed him — I was only three.

I know it sounds silly, but even then I knew he was The One.

Our families used to collect the tokens from The Sun to go away every year on holiday.

When I was eight we went to a caravan park in Seaford, East Sussex. That was where I first told Ryan that I loved him.

Everyone laughed at me, and Ryan was so embarrassed he went and did the washing up.

We were inseparable. For my ninth birthday we went to Disneyland Paris. I remember being there like it was yesterday.

I tried to hold Ryan’s hand but he always pulled away.

When Ryan was 16 he had a quad bike party but could only invite a few friends because it was so expensive. I was thrilled that he picked me.

We shared all those family milestones.

But weeks after Ryan’s birthday our mums fell out.

We’re not sure what happened but they stopped speaking, and because of that, so did we.

It was awful — we just stopped being part of each other’s lives. We had no choice.

Then Mum and I moved to a ­different part of town. I never thought I would hear or see Ryan again. I missed him so much.

On my 18th birthday I received a card in the post.

I knew it was his handwriting.

He’d managed to get my new address and inside the card he wrote: “Even though our mums have fallen out, I will always be there for you.”

My heart broke for him, so I sent a ­message telling him I was thinking of him.

He left his mobile number.

I played it cool and didn’t ring him straight away. That was foolish. I lost his number. I thought that was fate.

For years I thought about him.

Then tragedy reunited us.

In 2019 my mum was put into a coma because of liver problems.

Then I saw on social media that Ryan’s mum had cancer. They were in the same hospital.

His mum had been like a second mum to me, so I sent her a message on Facebook ­saying I was thinking about her.

The following September I was back living at home, caring for Mum, when I heard that Ryan’s mum had passed away at just 49.

My heart broke for him, so I sent a ­message telling him I was thinking of him.

I never heard back. I wasn’t surprised, he’s quite closed when it comes to his feelings.

I was in absolute bits. Everything was a blur, but then I got a ­message on Facebook from Ryan.

I played it cool and didn’t ring him straight away. That was foolish. I lost his number. I thought that was fate.

He’d heard about my mum and said if there was anything he could do he’d be there for me.

This time I didn’t waste a moment and messaged him back.

He still lived in Poole and drove straight round to my house.

It sounds like a cliche, but it felt as though we had never been apart.

Opening the door is a moment I will never forget.

He was wearing dirty work overalls, he had a long beard and hadn’t had his hair cut in ages, but I could see the boy who I loved underneath.

I looked into his eyes and knew that his heart and personality hadn’t changed.

He smiled at me, then hugged me. I felt so comfortable.

The love I had for him was overwhelming — it hadn’t gone away.

I didn’t want to stay at home alone, so I went to his house for a few days before the funeral.

The love I had for him was overwhelming — it hadn’t gone away.

We were able to talk about our mums together, remembering happy times.

Ryan said he would be by my side for the funeral.

I don’t know what I would have done without him.

I went to his house again after the funeral — and never left.

At first we were just friends, but as the weeks went on we started flirting.

And then we had our first proper kiss.

We were play-fighting and I went in for a kiss — a grown-up one.

He was shocked, though, and went quiet. Then we both went to bed . . . separately.

I was worried he wasn’t happy, but the next morning he asked: “Hope, will you be my girlfriend?” I said yes and kissed him again.

He’s an old-school romantic and had to do things properly.

We planned to take things slowly. We didn’t want to ruin the friendship we had got back.

But we also knew life was short and we wanted to be together.

I was worried he wasn’t happy, but the next morning he asked: ‘Hope, will you be my girlfriend?’ I said yes and kissed him again.

We made a list of all the things we wanted to do together.

We even did a skydive to honour our mums.

Ryan is my strong hero.

He’s not into huge romantic gestures but every morning he wakes me up with a cup of tea, cooks me breakfast and just takes care of me.

That’s what romance is all about.

We wanted a future together but never thought that would involve children because Ryan had been told he was infertile following a childhood infection.

Then, in July, my period was late so I did a test just in case. I couldn’t believe it.

That evening I arranged for us to go to a beauty spot called Evening Hill, in Sandbanks.

He was so happy — and shocked. It was definitely the most romantic thing I’ve ever done.

When we were told our due date is March 27, Mother’s Day, we couldn’t believe it. Our mums had something to do with that.

Ryan’s mum was a massive Ronan Keating fan, so we’re going to call our son Ronan.

When we were told our due date is March 27, Mother’s Day, we couldn’t believe it. Our mums had something to do with that.

We know our mums are looking down on us, and had it not been for their deaths we would never have found love.

They say love works in mysterious ways and for us, it really did.

Ryan said: “I was 28 when mum died. I’d already lost my nan and grandad and wasn’t close to anyone else in the world.

I hit rock bottom and really struggled getting up in the ­mornings. I was just existing.

When I discovered Hope’s mum had also passed away my heart broke for her, so I got in touch.

I picked her up and brought her back to my place, where we laughed and cried.

It had been years since I’d felt so happy, despite everything Hope was going through.

Being back together is everything I could have wished for. I will never let her go again.

Hope has made me the happiest man in the world.”