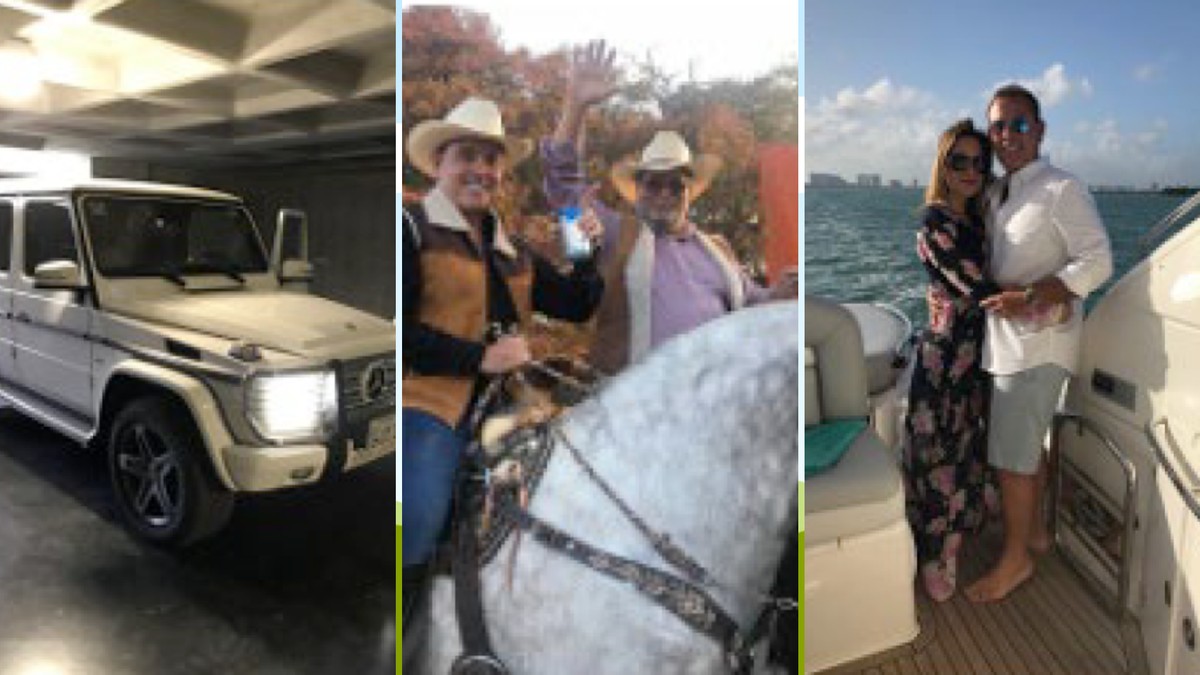 Images of Luis Eduardo González García and the high life he financed through his drug trafficking activities. Photos from US court documents.

MEXICO CITY — A drug trafficker is going to prison after sending an estimated $56 million back to Mexican cartels, the profits from cocaine that he helped smuggle through a “sophisticated network of warehouses and front companies” around the United States.

Luis Eduardo González García, 61, pleaded guilty and was sentenced to 30 years in a federal prison after being busted running the scheme for years, hiding the cocaine in trucks that he used to import legitimate products like laundry detergent, furniture, and Mexican snack foods to the U.S, according to the Drug Enforcement Agency. He made millions through his smuggling network working with various Mexican drug cartels and used it to fund a lucrative life of yachts, horses, and luxury cars.

González García posed as a regular business owner, registering his companies with the U.S. government, and even gave each their own websites, uniforms, and logos, according to court documents seen by VICE World News. Using his vast shipping network, drug cartels hid cocaine on so called “dirty pallets” inside trucks containing other products imported from Mexico to his various warehouses located in states like Illinois, Texas, and Georgia.

The U.S. government estimated that through the businesses that they targeted, González García laundered and sent back over $50 million to Mexican cartels between 2012 and 2017. But U.S law enforcement considers that “just a fraction of the proceeds funnelled through defendant’s DTO [drug trafficking organization] warehouses, as this figure does not include any of the earnings from multiple other known DTO warehouses.”

Prior to sentencing González García’s lawyers attempted to portray him in court as a “remorseful” family man, “who was recruited to join the drug trafficking business because of knowledge about moving goods across the border he developed over decades of legitimate business enterprises.”

“Clouded in bad judgement, Mr. González García started to supplement his income with the quick cash of trafficking cocaine – a decision he will forever regret.”

His lawyers submitted letters asking for leniency to the judge from family members, the Mexican town mayor of Cerralvo, where he grew up and lived, and a young priest who he’d supported through his priesthood and study in the seminary. They argued that González García’ involvement in drug trafficking was just “a small chapter in his life” and that during that period, he never resorted to violence.

But U.S. authorities painted a different picture of González García, saying that “although the government does not have evidence that defendant ever used violence in furtherance of drug trafficking, he was certainly willing to.”

Authorities submitted a series of text messages to the court from González García where he discussed having one of his underlings murdered when he was worried that he was going to “snitch” to the cops: “I’ll get rid of him,” González García wrote, because “The company [Cartel] doesn’t tolerate bullshit [cooperating with law enforcement].”

González García worked with notorious Mexican gangster Martín Villegas Navarrete, known as “El Elegante” or The Elegant One in English, according to court documents. Villegas Navarrete was a high ranking member of a ruthless Mexican drug cartel called the Beltran Leyva Organization [BLO].

“His [Villegas Navarrete] terror is legendary throughout Mexico,” they wrote.

Villegas Navarrete was arrested in Mexico in 2015, and extradited to the U.S. in 2018 on drug trafficking charges dating back to a 2011 indictment. It’s then that González García’s involvement in smuggling cocaine became known to authorities when Villegas Navarrete gave a detailed interview that implicated him, which was included in the court documents.

Villegas Navarrete claimed that he met González García in Chicago around 1997 and that his involvement in the drug trade began much earlier than 2012. The convicted trafficker alleged that by 2008 or 2009, González García was already involved in transporting drugs for the Zetas Cartel, specifically mentioning that he worked with notorious bosses Heriberto Lazcano Lazcano and Miguel Ángel Treviño Morales.

Villegas Navarrete also alleged that González García worked with several Colombian cocaine producers, and that his role was as “a businessman for the cartels” who “would put sources of supply in contact with wholesale distributors, and acting as a transportation cell to deliver the drugs and/or money on whatever agreement was reached.”