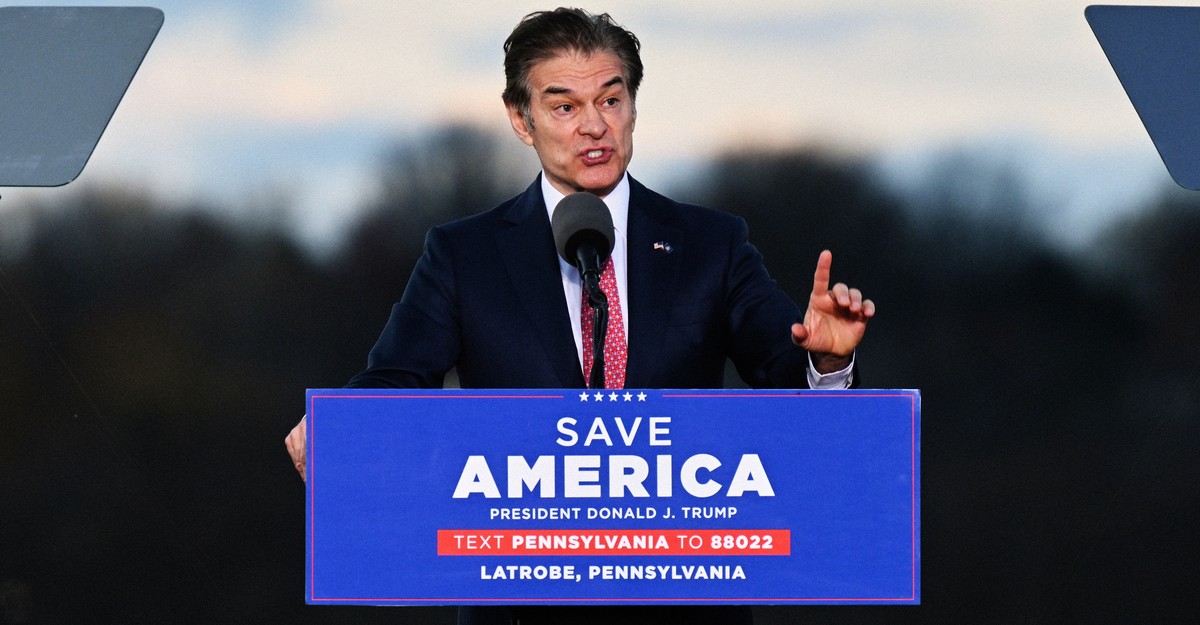 Ask anyone what Mehmet Oz said about reproductive rights during last month’s Pennsylvania Senate debate, and they’ll probably tell you that the TV doctor believes an abortion should be between “a woman, her doctor, and local political leaders.” The truth is, that dystopian Handmaid’s Tale–esque statement did not come verbatim from the Republican’s mouth. But it may have cost him the election anyway.

Instead, that catchphrase entered Pennsylvania voters’ consciousness—and ricocheted across social media—via a tweet by Pat Dennis, a Democratic opposition researcher. Dennis’s megaviral post included a clip purporting to show Oz pitching something akin to a pregnancy tribunal. But the clip was, well, clipped: In the 10-second video, Oz does not even say the word abortion. Did it matter? Not in the least. Here was Oz’s fuller, unedited response to the question:

There should not be involvement from the federal government in how states decide their abortion decisions. As a physician, I’ve been in the room when there’s some difficult conversations happening. I don’t want the federal government involved with that at all. I want women, doctors, local political leaders, letting the democracy that’s always allowed our nation to thrive to put the best ideas forward so states can decide for themselves.

Although that by no means utterly rebuts Dennis’s three-clause summary, it is different. Of course, voters zeroed in on—and recoiled from—the pithier version. Oz failed to shake his association with the thorny abortion hypothetical, much as he failed to shake the long-running joke that he actually lives in New Jersey. Abortion decided this race, and Oz was on the wrong side of history.

Read: Why this election is so weird

In red and blue states alike, reproductive autonomy proved a defining issue of the 2022 midterms. Although much pre-election punditry predicted that Pennsylvania Democratic nominee John Fetterman’s post-stroke verbal disfluency was poised to “blow up” the pivotal Senate race on Election Day, the exit polls suggest that abortion seismically affected contests up and down the ballot.

Concerns over the future of reproductive rights unequivocally drove Democratic turnout and will now lead to the rewriting of state laws around the country. In deep-red Kentucky, voters rejected an amendment that read, “Nothing in this Constitution shall be construed to secure or protect a right to abortion or require the funding of abortion.” In blue havens such as California and Vermont, voters approved ballot initiatives enshrining abortion rights into their state constitutions.

In Michigan, a traditionally blue state that in recent years has turned more purple, voters likewise enshrined reproductive protections into law, with 45 percent of exit-poll respondents calling abortion the most important issue on the ballot. In the race for the Michigan statehouse, the incumbent Democratic governor, Gretchen Whitmer, trounced her Republican challenger, Tudor Dixon, who had said that she supports abortion only in instances that would save the life of the woman, and never in the case of rape or incest. Dixon lost by more than 10 percentage points and almost half a million votes.

After the Supreme Court’s Dobbs v. Jackson Women’s Health Organization decision ended the federal right to abortion in June, many observers wondered whether pro-abortion-rights Democrats would remain paralyzed with despair or whether their anger would become a galvanizing force going into the election season. The answer is now clear—though, in fact, it has been for some time.

In August, just six weeks after Dobbs, Kansas voters rejected an amendment to the state constitution that could have ushered in a ban on abortion. That grassroots-movement defeat of the ballot initiative was a genuine shocker—and it showed voters in other states what was possible at the local level.

Nowhere in the midterms voting did abortion seem to matter more than in Pennsylvania. Oz, like his endorser, former President Donald Trump, spent years as a Northeast cosmopolitan before he tried, and failed, to remake himself as a paint-by-numbers conservative. That meant preaching a party-line stance during the most contentious national conversation about abortion in half a century. It came back to haunt him.

At the October debate, Fetterman was mocked for (among other things) his simplistic, repetitive invocation of supporting Roe v. Wade. Even when asked by moderators to answer an abortion question in more detail, he simply kept coming back to the phrase. Whatever it lacked in nuance, Fetterman’s allegiance to his pro-abortion-rights position was impossible to misconstrue. This was an abortion election, and voters knew exactly where he stood.