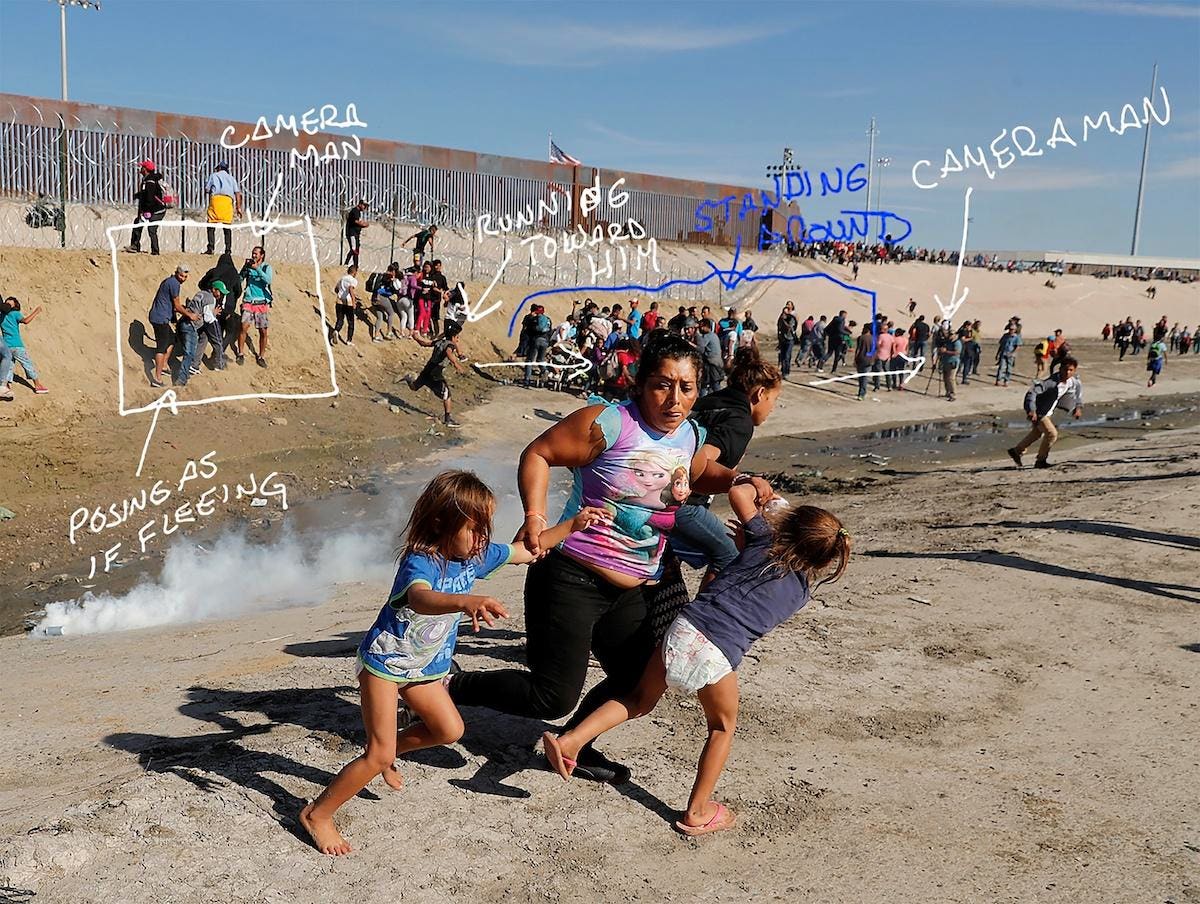 A couple years ago, the internet found out that Joe Biden had a body double. Proof was presented in a pair of photographs taken in the Oval Office. One showed Biden signing legislation with a pen in his right hand. The other documented a pen in his left. Although the falsehood was obvious to anyone who noticed the reversal of the Presidential seal in the background – revealing the trick that the second picture was flipped – most people who shared the montage had no interest in learning the truth. They wanted to undermine faith in the President by any means available.

The manipulated photo of Biden was forgotten by most people soon after going viral in January of 2021, but countless others circulate online every day. Although the quantity is overwhelming, most fall into a few basic categories. At UC Riverside’s California Museum of Photography, the photographer and curator Douglas McCulloh has set out to create a taxonomy.

McCulloh self-consciously emulates naturalists such as Carolus Linnaeus, collecting type specimens as a basis for identifying species of duplicity in the wild. Catalogued online and presented in a gallery exhibition, his type specimens of “fauxtography” provide a basis for future fieldwork and, at least as important, an education for anyone who wants to avoid falling prey to future falsehoods.

The pictures are intentionally unexceptional. “Our collected type specimen photographs, for all their occasional charm and polish, are not high art (a marginal practice of elites),” writes McCulloh in his introductory essay. “They are scruffy and active, woven into the fabric of life.” The extraction of these examples from their natural environment makes their subterfuge visible. The peculiarity of seeing them in the artificial conditions of a gallery or online art exhibit makes each modus operandi memorable.

Photo-manipulation is the most obvious ruse, if not necessarily the easiest to detect. For a propagandist more agile than the instigator of the Biden body double hoax, Photoshop offers myriad tools, and even more can be achieved with AI. For instance, the type specimens include an image of men in hazmat suits fumigating the Oval Office following Trump’s departure, a composite of two real photographs merged into a work of graphic fiction. The merger is skillful, but what makes it successful is the affirmation felt by myriad people who considered the Trump presidency toxic.

The will to believe – or eagerness to have beliefs confirmed ­– gives traction to less laborious acts of deception, sometimes as straightforward as recontextualization. As McCulloh astutely observes, “the internet untethers photos from the facts of their origin and supercharges image delivery with near-instantaneous global reach and echo chamber amplification”.

One exemplary type specimen shows the former German chancellor Angela Merkel touring a jet loaded with large unlabeled barrels. Next to several photos, all authentic, is another authentic photograph showing condensation contrails that streak the sky when jets fly at high altitude. The caption on social media – “they are spraying us” – reinforces a popular conspiracy theory that the government is controlling citizens with “chemtrails”. If you don’t happen to know that barrels of water are used as ballast to simulate passengers in new jets, and you aren’t aware that Merkel was photographed touring a new Airbus A350-900 at the Berlin Air Show in 2014, you might easily be convinced that an innocuous situation is anything but. And the speed with which imagery churns through social media leaves no chance for reflection, let alone investigation. The false evidence is gone almost as soon as it’s presented, and the details are forgotten as other pictures are foregrounded. All that remains is an impression. Even if chemtrails were real, and really controlled people’s minds, they could hardly outcompete the daily sensory overload of Twitter and Instagram.

These hazards are well known. What is less often discussed, though arguably more dangerous, is the impact that deception has on honest documentation. “The growing density of photographic lies threatens to cast generic suspicion across all of photography,” writes McCulloh. As an example, he shows a Reuters photograph of an asylum-seeker on the Mexican side of the border wall pulling her young children away from a canister of tear gas lobbed at her by ICE agents. Under the rubric of #fakenews, a conspiracy site called the Gateway Pundit has annotated the picture with arrows pointing to bystanders spuriously labeled as cameramen and actors. The annotations are sloppy and nonsensical. It makes no difference. The specter of disinformation riles and reinforces the biases of viewers. The liar’s paradox has escaped the confines of philosophy to become the premise of photography.

Like the naturalists who are his role models, McCulloh collects and classifies his finds but does not provide a plan for exterminating those that are pathogenic. Fortunately his metaphor is incomplete. In reality, we’re the ecosystem in which lies live and breathe. They don’t just act on us. They are a part of us.

A taxonomy of falsehoods can help nurture self-awareness and critical thinking, neutralizing obvious confabulations. But even as we bolster skepticism, we must not forget the deeper need to motivate honesty. Our photography in aggregate is a picture of our psychology. Peering at our inner selves, maybe we’ll come to see past what we want to believe and perceive who we truly want to be.