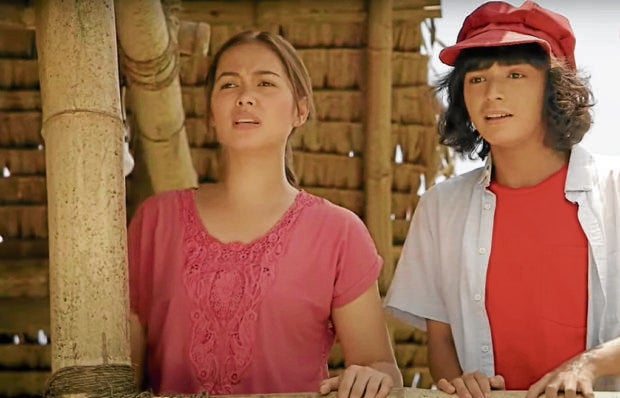 “Put your heart into everything that you’re doing.”

This was the advice that young actor Noel Comia Jr. said he has gotten from Maja Salvador, his costar in the TV5 family oriented drama series “Niña Niño.”

The cast members of the series directed by Thop Nazareno attended a recent media gathering to announce its series extension and to introduce new characters that will be joining the program in 2022.

“I learn a lot from her. As an actress, Ate Maja is very supportive especially on the set. When you’re in a scene with her, you will really feel her energy. I often get swept away by that,” recalled Noel, who plays Maja’s younger brother in the series. “I remember that she told me once: Put your heart into every scene and you will never go wrong. I used to be an ‘intellectual’ actor, meaning, I read the script thoroughly, write down all my scenes and really study all my lines; and then I would get really nervous. She said, isapuso mo lang and stop worrying,” he added.

This 2022, “Niña Niño” will introduce more intriguing conflicts that will keep viewers hooked: Someone from the past is believed to be returning, at the expense of revealing a longtime secret that may threaten the relationship of the siblings. Matet de Leon, Jairus Aquino, Nikki Valdez, Alex Medina, Harvey Bautista, Nikko Natividad, and Mon Confiado are among the new stars who will be joining the series.

Noel was then asked who else he would want to work with on the program. To this, he said Kathryn Bernardo, “because she’s my crush.” When it was comedian Empoy Marquez’s turn to answer the question, he replied Kaye Abad, “my ultimate crush since high school.”

On his most cherished memory at work was, Empoy said: “What got really etched in my mind was the amount of preparation I did for my kissing scene with Maja. I consumed seven sachets of toothpaste to make sure I was ready for her, but the scene didn’t happen.”

Empoy said he was happy to have been able to establish a good working relationship with everyone involved in the show. “Sobra ang bonding namin dito, on- and off-cam. It feels like when we’re in our respective homes, we miss our small community in Quezon province—our fictional place Sta. Ines. We miss not just our coactors but also the staff and crew, as well as the local talents there. We’ve grown to love them and consider them our family. We also miss the transient homes where we stayed at.”

This was also why Empoy said he felt no pressure after the show bagged the trophy for best drama series (national winner) at the 2021 Asian Academy Creative Awards. “We actually feel overwhelmed but happy. The entire family is thankful to have been recognized for our efforts. We dedicate the award to our supporters and to God, who gave all of these to us—the good weather, our family at work.”

More than feeling pressured, Noel said he is excited, especially of the fact that there are more personalities coming into the show. “I feel that the family has only gotten bigger, that I now have more people walking beside me in this journey of making a story that will inspire more viewers. I’m actually enjoying the show a lot more now,” he pointed out.

Noel has also claimed to be embracing his character, Niño, more as the episodes add up. He has since decided to adapt some of Niño’s positive traits. “It’s his being a happy person that I like. Before this show, I used to be a chill person. Because of Niño, I’m now friendlier, more energetic, more game at trying out new stuff. I like being him kasi ang gaan lang. Like him, I want to just be happy all the time.”

One of the favorite scenes he has done so far, Noel said, was the one where he performed in front of a crown in a Christmas-themed chorale competition. “This scene was aired before Christmas. It was memorable because we really took time to practice the song and recorded it,” he recalled. “I also liked it because it showed how close we really are even off-cam. You will really notice the chemistry we all have.”

Noel further said: “I pray that this pandemic will finally end so we can all go back to living ‘normal’ lives. I also wish for us to continue making this series in order to entertain more people and give them hope. I pray for four to six more seasons after this.”

Empoy agreed with Noel by saying: “I also pray for the pandemic to end so that we can organize family gatherings once again, go to church together every Sunday, watch films with our friends inside movie houses, as well as attend concerts and support gigs of our favorite bands. I wish that, as we go back to our ‘old normal’ lives, more people will get employed; and those who have been suffering from depression and anxiety will finally find healing. We still have a lot to go, so we just continue to pray.”

“Niña Niño” airs on TV5 every Monday, Tuesday and Thursday at 7:15 p.m., before FPJ’s “Ang Probinsyano” and after “Sing Galing.”