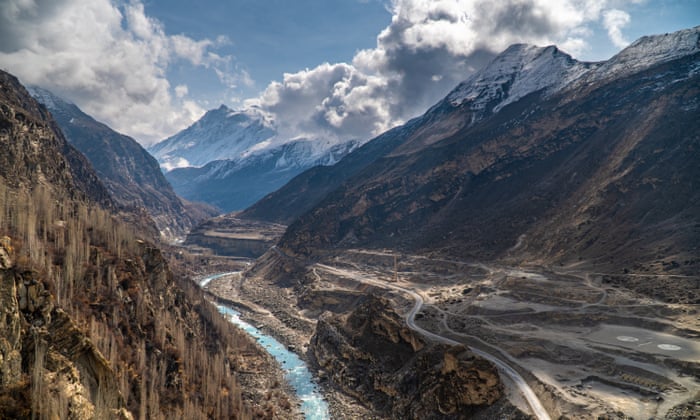 Dr Phil Porter is describing the intricate interior of a glacier. “Imagine that the inside of the glacier is like a giant swiss cheese full of tunnels, passageways and caverns,” he says. “Understanding how glaciers work inside is really important in terms of predicting how much melt water will emerge and when.”

Last year a study found that the melting of the world’s glaciers has nearly doubled in speed over the past 20 years. Porter, a glacier scientist at the University of Hertfordshire, studies the rate at which glaciers melt, and has worked on projects in the Himalayas – in Pakistan’s Northern Areas and north-east Nepal – looking at the effects of global heating on the amount of meltwater produced.

The ice fields in the Hindu Kush and Himalaya range provide a critical water resource for the 210 million people who live in the region, and much of the wider Asian continent relies on this water, particularly outside of monsoon season.

“A sizable proportion of the world’s population is directly or indirectly dependent on snow and ice melt for their water resource for consumption, irrigation and power generation,” says Porter. “Being able to predict how those water supplies are going to change in the future is really, really important.”

In some areas, the melting glaciers are making the supply of water more erratic, forcing communities to develop new solutions. Porter gives the example of an innovative local project in the Himalayan region of Ladakh, an area of cold desert where villages rely on water from glacial streams. In April and May, when water is needed for crops, there is insufficient supply. So in the winter months, some of the water is diverted and frozen into large ice towers, or artificial glaciers referred to as “ice stupas”. These stupas then melt in springtime, providing much-needed supplementary supplies of water.

The picture in the Himalayas is complex. One reason for this is that the Himalayan range is still rising. This helps encourage processes such as rockfall, which can blanket parts of glaciers with thick layers of rocks and insulate the ice from melt. Despite this, ongoing glacial shrinkage will likely lead to a reduction in overall water supply from the middle of the century. Although warming may trigger increased rainfall to partly offset dwindling glacial water supplies, this will likely increase flood risks.

The glacial changes will have far-reaching consequences, says Porter, including potentially for the UK. “I don’t think we fully appreciate how reliant we are on imports from countries that rely on snow and ice melt to support agricultural productivity,” he says, citing tea production, as well as cotton, which is grown extensively in the region and exported globally.

Delhi’s air pollution
Research carried out by Prof Ranjeet Sokhi, professor of atmospheric physics and director of the Centre for Climate Change Research at the University of Hertfordshire, feeds into work to make climate change modelling more precise. It includes examining how air pollution in Delhi – which caused a thick brown smog to envelop the city last November – can be controlled and minimised, and how strategies to adapt to the longer-term impacts of global heating can be improved.

Air pollution is the leading environmental risk to health, and the fifth highest global mortality risk in 2017.

“The government of India has instigated a clean air programme, with a target of reducing fine particles by 25% compared to 2017,” says Sokhi. “What is lacking is the understanding of the key science drivers behind this air pollution. If we want to have mitigation and adaptation strategies, we have to know what is causing it.”

Sokhi is the UK principle investigator for PROMOTE (Process analysis, observations and modelling – integrated solutions for cleaner air for Delhi), whose scientists, from the UK and India, are looking at the processes that drive air pollution, with the aim of more accurate air quality forecasting.

Exactly how these processes work is complex. For instance, fine particle emissions are the usual target of air pollution reduction measures. But there are also volatile organic compounds which, combined with nitrogen oxide from vehicle emissions, react with sunlight to produce ozone. “This isn’t new, but quantifying it for Delhi conditions is where we come in,” says Sokhi.

Using mathematical models, the scientists can work out the distribution of air pollution in and around Delhi. They are also coupling regional models of air pollution distribution with those that apply at a street scale. “This helps us understand where the hotspots are,” says Sokhi. “As far as we are aware, this has never been done in India before.”

Meanwhile Dr Pushp Raj Tiwari, who leads a programme on climate interaction and future changes, addresses the effect of anthropogenic emissions on regional climate extremes (heat waves). His research work with high resolution climate models indicates that minimum winter temperatures across Asia are likely to increase by 2-3 degrees centigrade by 2050, compared with 2000. It shows that in a megacity such as Delhi, with high numbers of vehicles and emissions, air quality will deteriorate along with the health of its inhabitants. This work will feed into the Indian government’s national adaptation plan on air pollution and heat.

Ultimately, both Sokhi and Tiwari agree that climate initiatives, green energy, and solar energy need to be better connected with air pollution strategy.

Find out more about the game changing multi-disciplinary research at Herts, how it is deepening understanding of climate change and helping to tackle the environmental emergency.