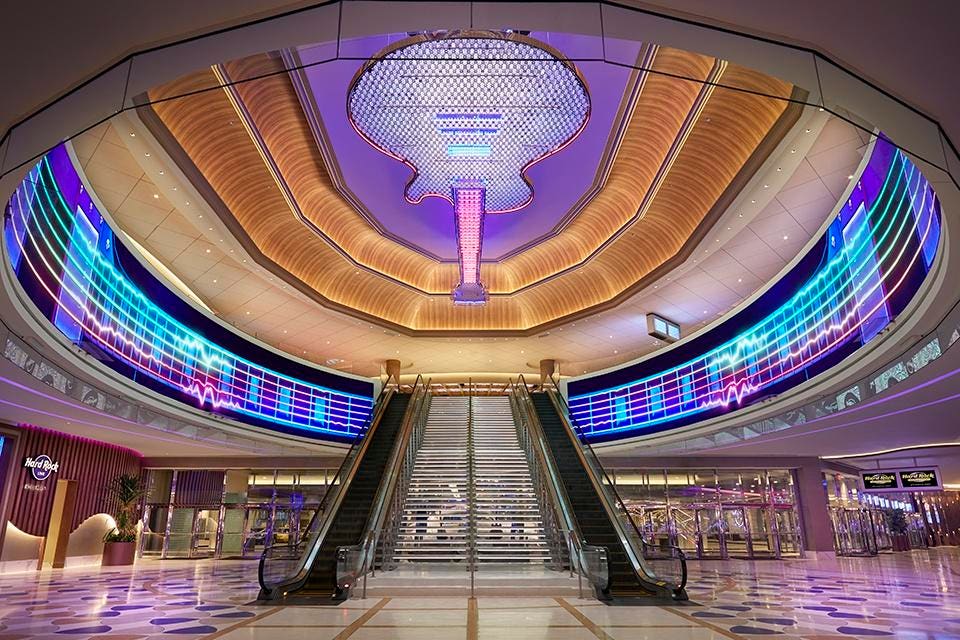 It’s not every day that you can stroll into a glittering casino and catch a roof-raising brass band in the lobby bar wowing the crowd, beeline by the blackjack tables to find dueling pianos bringing guests to their feet in a buzzing cafe, and then head to a top-quality concert hall for a performance by a legendary talent—all within one rollicking resort.

But the arrival of the Hard Rock Hotel & Casino Atlantic City four years ago has transformed the entertainment game in this storied seaside destination. As legions of eager customers return to A.C.’s casinos post-pandemic, the 17-acre property, which opened in June 2018, is building on its blockbuster brand and galvanizing Atlantic City’s music scene, attracting a slew of marquee acts that arguably wouldn’t have considered playing there even five years ago. Past and future Hard Rock headliners this year includes over 25 Grammy-winning artists, including Alicia Keys, Lionel Richie, Rod Stewart, and Ringo Starr.

Hard Rock Atlantic City President, Joe Lupo, has long played a pivotal role in the evolution of the city’s musical offering. A 35-year casino industry veteran, he spent more than three decades with Boyd Gaming, helping to launch Borgata Hotel Casino & Spa as vice president of operations when it debuted nearly two decades ago. It was there that he realized the role premier entertainment could play in luring new audiences.

“With Borgata’s opening in 2003, our goal was to bring new customers to Atlantic City, which had a longstanding reputation as a gambling town,” Lupo says. “Music—a driver for attracting all kinds of diversity and different segments of the population—was a great way to do that.”

Now running the proverbial show at the resort after joining Hard Rock International in 2016, Lupo—working with Michael Woodside, the property’s vice president of entertainment— is leveraging resources including the company’s bulletproof brand equity, longstanding relationships with partners like Live Nation, and his unassailable industry acumen to both elevate and dominate the city’s musical landscape.

“We have many great partnerships in Atlantic City,” says Geoff Gordon, regional president, Live Nation Northeast. “Joe Lupo has been instrumental in helping us build and solidify those relationships over time and grow the market as a true entertainment destination.”

One crucial asset in the property’s arsenal: the 5,500-seat Hard Rock Live at the Etess Arena, the largest performance venue of any casino in town, which in the last 12 months has hosted KISS, Guns N’ Roses, and Andrea Bocelli, among other world-class artists.

“It’s enabled us to host acts that often play in much bigger arenas and stadiums in a more intimate setting, which people find special,” Lupo says.

He points to the example of Bocelli, the Italian operatic tenor who performed on June 25 at the Etess arena for a rapt audience that spanned the demographic spectrum. “I’m sure we had many new customers that walked in our door for the first time that night—and some who may have come to Atlantic City for the first time,” he says. “Having one of the greatest entertainers in the world on our stage brings that customer out.”

Ultimately, Lupo explains, the idea is to grow revenue by giving both new and returning guests compelling reasons to stay and explore the resort before and after the show. “We’re trying to program the whole weekend,” he says. “It’s a real experience—you can have a great dinner and go to the spa and the beach, instead of seeing a show in Philadelphia and just heading home afterward. We can showcase the property to that new or infrequent customer with a terrific weekend, and hopefully encourage them to come back.”

This strategy also applies to attracting younger audiences with acts like The Chainsmokers, who played Hard Rock Live last month, and Greta Van Fleet, who will take the stage there for two nights in December.

“These kinds of shows might not contribute a lot to gaming revenue those nights, but they’ll cultivate overnight stays—and those fans may want to return to see another show and dine at one of our restaurants,” he says.

Hard Rock’s music-first ethos manifests in the resort’s “365 Live” programming commitment, which means there’s live music every day of the year. During the summer, the casino hosts 25 bands per week, with three stages running simultaneously on the weekends. That translates to well over 10,000 hours of live music annually, according to Adam Zengel, director of entertainment operations, who also curates more than 30 playlists of overhead music throughout the property.

“It’s not often that people enter a casino dancing, as we’ve seen our customers do when they open the doors and hear the music. That energy is a big element of our appeal,” says Lupo.

Not surprisingly, all this fun comes with a hefty price tag. Lupo estimates the resort’s total entertainment investment this year at around $25 million. “While some of our competition has really pulled back on their spending after the pandemic, we’ve increased ours to create this exceptional environment, and it’s driven a lot of visitation,” he says.

Heading into the fall, Lupo is also banking on the ongoing recovery of the convention business to help drive revenue. With 2,000 rooms and more than 150,000 square feet of meeting and event space, the resort is keen to leverage its music-driven DNA to also entice corporate clients. “Conventions, which are midweek business, are a real pillar of our foundation here,” he says. “I think we’re stealing quite a bit of it from other properties that don’t have the same philosophy of maintaining that midweek energy.”

As for the longer-term future, Lupo points to Hard Rock’s burgeoning presence across the U.S. and the world (its venues currently span 253 locations in 68 countries) as a source of potential synergies. Stateside, the hotly anticipated Hard Rock Hotel New York debuted in April, followed by a hotel and casino in Bristol, Virginia, last month. Last December, Hard Rock International announced an agreement to purchase The Mirage Las Vegas Hotel and Casino for $1.075 billion. The company plans to build a guitar-shaped hotel on the 80-acre site on the Las Vegas Strip, slated to open in 2025. Meanwhile, plans for a sprawling new hotel & casino complex in Athens were announced in June.

“We have to always be cognizant of our brand, and partner with the truly great acts that speak to Hard Rock and our music orientation,” Lupo says. “You’ll see those acts bounce from Hard Rock to Hard Rock. That’s the future evolution of our brand not only here in the U.S., but throughout the world.”