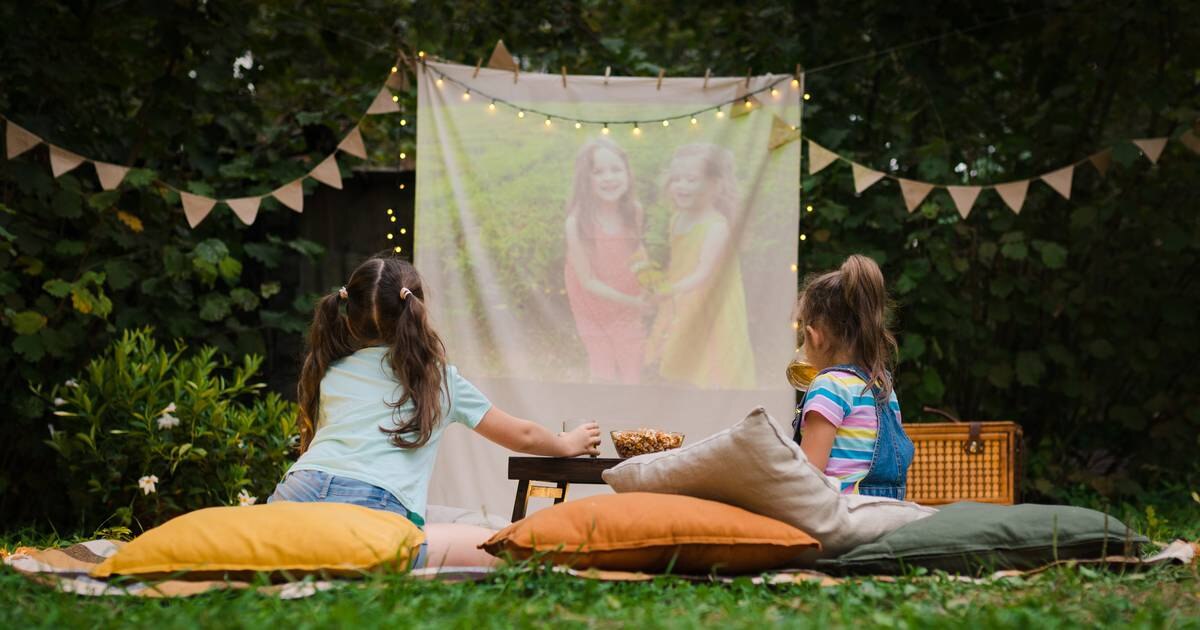 The drive-in movie experience may have had its heyday in 1950s America, but this nostalgic form of entertainment enjoyed a comeback during the pandemic, with open-air cinema events popping up not just all over the US, but around Ireland too. So why not keep this trend going and make the most of balmy summer evenings by hosting a “cinema beneath the stars” gathering in your own garden?

Don’t worry if your budget isn’t huge or you’re a technophobe – simply follow our four-step guide and you’ll have that laid-back Americana-vibe movie party nailed. Just don’t forget to check the weather forecast!

The key piece of kit you’ll need is a projector, and the most important factor when choosing the right one is the ‘lumen’ rating, which measures the amount of light it produces. If you want decent picture quality outdoors, experts advise that you’ll need at least 3,000 lumens.

Conor Lyons of ACE Audio Visual in Sandyford, Dublin, cautions that you should wait till the sun goes down so that it’s dark enough to see the projected image. If there’s still some lingering daylight when your party kicks off, however, then a pop-up gazebo can make a big difference by shading the screen and preventing light from shining on the projector lens.

Budget-wise, one of the cheapest options is to rent a projector. Hiring a mid-range 5,000-lumen projector, a stand, a tripod screen and two speakers for 24 hours from ACE Audio Visual costs €165 (not including delivery or set-up).

However, if you’re planning on making outdoor movie get-togethers a regular fixture, then it might make more financial sense to invest in your own equipment. Lyons says to budget around €700 for an entry-level, good-quality home cinema projector from a reputable brand.

Once you’ve selected your projector, how do you use it to play your favourite flick? Most projectors have a HDMI connection so you simply connect a device, such as a laptop, and then log into your streaming service of choice such as Netflix. Some projectors are also compatible with Amazon’s streaming device, the Fire TV stick.

When it comes to setting up a screen, you could go old-school and peg a sheet to a clothesline, but simply projecting the image on to a white wall works well too. If you can afford it, the best option is a portable tripod screen: you can set it up anywhere and then easily fold it away once you’re done.

You may want to budget for speakers too. “Some projectors come with very low-wattage speakers built into them,” Lyons says. Although these are fine in small-scale situations where you have just a few people over, if you’re trying to create a proper cinema experience, you’ll need to invest in a better-quality sound system.

If you decide to invest in a decent projector, screen and audio system, expect to pay a minimum of €1,000.

And remember, you’ll also need a power source, so make sure you have a long enough extension lead with two sockets, one for the projector and another for the speakers.

The ideal location for a home cinema event is a garden that’s sheltered from the elements and that offers plenty of shade. However, if you’re willing to get inventive, you’ll not only make your movie party more memorable, but you may also end up with a better picture quality.

Lyons recalls one customer who rented a projector because her daughter was competing in the Olympics, and she screened the event in a barn. This proved the perfect environment as the event took place during daylight hours. The whole family, he says, “had an unbelievable experience”.

And Mariea Doherty-McGinty, owner of Mama Bear Parties in Donegal, tells us that when her daughter turned 18, some of her friends were staying over, so Mariea stuck posts into the ground in the garden, hung blankets on them to make a den and set up her projector equipment inside so the girls could enjoy a unique movie night. “They loved it, and they were all 17 and 18.”

And because projectors are so small, you can bring them on holidays with you. Mariea brought her equipment on a family camping holiday and one evening when the weather was good, she set it up and children from all over the campsite gathered to watch the movie. “It was beautiful.”

Caroline Gardiner of events company The Party Professionals (partypros.ie) recommends going for a retro American ambience. “Keep it all fun and light,” she says. “If the garden lent itself to hanging decorations, you could put up hanging red, white and blue lanterns. Keep it American.”

“I would be putting festoon lights everywhere,” she continues. “They give that gorgeous atmosphere to any garden, be it a home cinema or not, creating a soft mood lighting. That’s the most important thing.”

“I’d definitely be putting down loads of different-coloured beanbags all over the grass. People want to lie back, eat popcorn and relax,” she adds.

Mariea Doherty-McGinty’s tip is to use solar lights as they aren’t too bright, so won’t detract from the picture quality. She also recommends leather beanbags that can be wiped down, and picnic blankets with waterproof backing. “They’re handy for smaller kids and you can just throw a cushion on top.”

4. Rustle up a food-truck-inspired feast

Gourmet Food Parlour founder Lorraine Heskin suggests dishes such as beef sliders (which have plenty of scope for different toppings such as pulled pork and mac and cheese), tacos and wings. And if you want to push the boat out and arrange for an actual food truck to rock up at your party, Gourmet Food Parlour’s mobile truck travels nationwide and can serve everything from tapas and street food to a full barbecue menu.

Chef Derek Dunne, who owns the Chef’s Creation food company (which delivers box kits in the Dublin area), is a fan of grazing boards and says these are the perfect option if you’re having people round to your garden but don’t want to go to the effort of producing a full meal.

One easy grazing-board option is a cheese selection with salami, cured meat, some sourdough and a nice pesto. If you want to create something a little more elaborate, Dunne suggests chicken wings, meatballs with nduja, and tasty pakoras.

And of course no movie party worth its salt would be complete without cinema-worthy popcorn. Gardiner says people should “definitely consider hiring a popcorn machine”. You can expect to pay about €165 for one from a company such as funfoods.ie.

Slush puppie machines are also inexpensive to hire (about €90 from premierevents.ie), and the syrupy crushed-ice drinks will be a show-stealer for kids. And if it’s an event for adults as well? Simply add alcohol and hey presto, you’ve got strawberry daiquiris on tap. “A little bit of rum and you’re good to go!” Gardiner says.

How to style your movie under the stars

Hollywood Directors Clapper Board, (€5.99) from Woodie’s.

4. Back to the Future

7. Night at the Museum