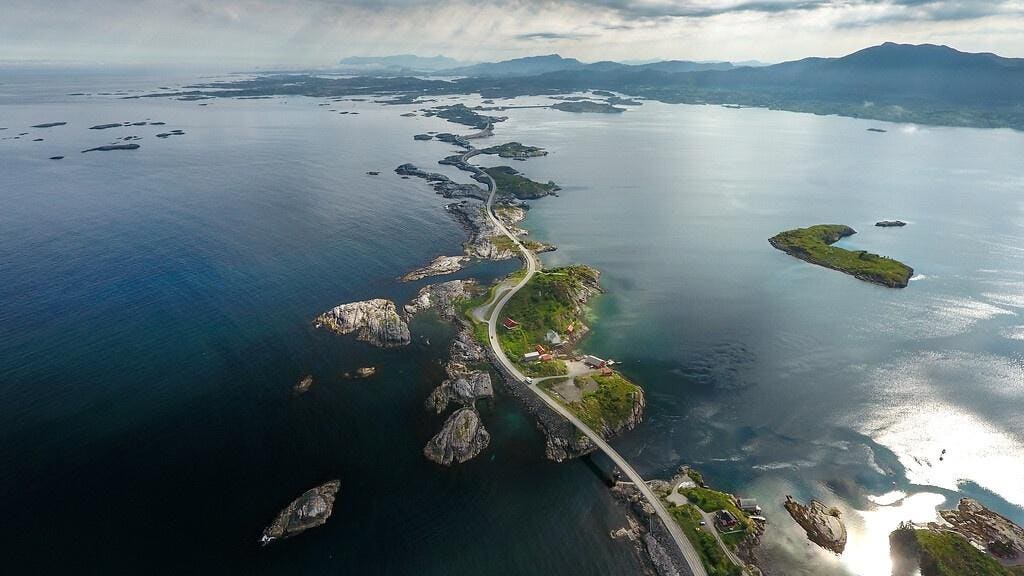 Daniel Craig drove back and forth along Norway’s Atlantic Road in his last appearance as James Bond in No Time To Die. It was the latest in a long list of TV and film appearances for the five-mile stretch of route 64 since its opening in 1989.

As one of Norway’s 18 designated national scenic routes, the Atlantic Road has received substantial investment in restroom facilities, pedestrian walkways and other points of interest.

While the five-mile stretch is world-famous, the scenic route designation covers a much longer stretch of route 64. The full scenic route from Kårvåg to Bud is 22-miles long and there’s so much more to see and do besides the driving experience itself.

Driving the Atlantic Road is a common wish of drivers planning a road trip around the Norwegian fjords. But the area deserves so much more than a quick ten-minute drive across the bridges.

Consider making the coastal town Kristiansund an overnight stop in your itinerary. The town has several well-known fish and seafood restaurants and is the starting point of the Atlantic Ocean tunnel, your gateway to the Atlantic Road.

Opened in December 2009, the 3.5-mile-long undersea tunnel has made a visit to the Atlantic Road much easier. Since 2020, the tunnel has been entirely toll free.

When driving from the tunnel, it’s worth taking your time on Averøy island rather than heading directly to the Atlantic Road. Immediately after the tunnel exit, turn off to the charming old fishing village Sveggen for the first of what will likely be many coastal walks.

The route is part of Norway’s national cycle route 1, a well-known route among keen cyclists as it takes in the entire coastline of Norway. Between Bergen and the North Cape, the route is also part of the pan-European route EuroVelo1.

Cyclists should be wary of heavy traffic in the summer season combined with the potential for slightly distracted drivers. Strong gusts of wind can be an issue, as can sudden splashes of water from the at-times rough ocean.

The large colorful waterfront houses are the only hunt that Bud was once a major trading post on the coastal route between Bergen and Trondheim. The Bud of today is a much quieter place, known both for its charm and its war history.

Built by German occupiers during World War Two, the Ergan Coastal Fort has been restored as a war memorial museum. A colony of black-legged kittiwakes that call Bud their home in the summer adds interest for wildlife lovers and keen photographers.

At the western end of the famous stretch of road, Vevang is worth a stop for its coastal path and views of the ocean landscape. Those heading down the path will stumble upon an artwork that lies on the rocks, in heath-covered hills and in the water.

If you’re not sick of ocean views by the time you get there, Askevågen offers one of the best in the area. The purpose-built viewpoint at the end of the breakwater gives a panoramic view of the ocean and mountainous shoreline.