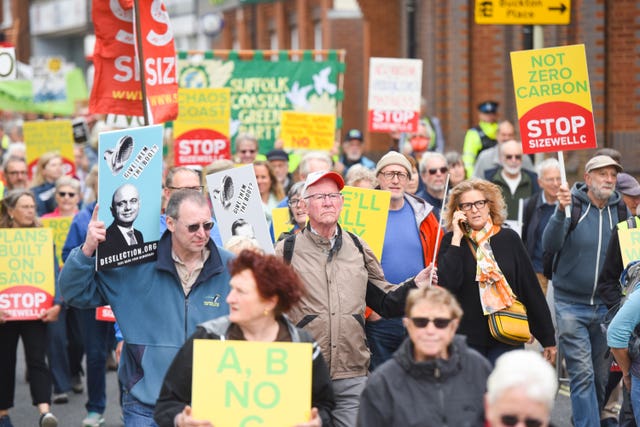 Hundreds of protesters gathered in east Suffolk on Sunday to oppose the constructing of the Sizewell C nuclear energy station.

Carrying banners that learn “chaos coast coming soon”, “EDF-off” and “we don’t want to be beside the C”, the group marched from Leiston to Sizewell seashore.

The demonstration came about days after ministers deferred a choice on whether or not to grant improvement consent by six weeks.

Earlier this week, the Department for Business, Energy and Industrial Strategy set a brand new deadline of July 8 because it seeks extra info on points akin to water provide.

Campaigners say the delay is a recognition of the undertaking’s issues together with water provide, transport, coastal erosion and biodiversity.

Alison Downes of Stop Sizewell C stated: “A call to go forward with Sizewell C can be a fallacious determination.

“EDF has clearly not taken this community with them, and the Government has totally betrayed the faith of local people in due process by repeated commitments to Sizewell C when it doesn’t have planning consent, let alone a final investment decision.”

Adrian Ramsay, co-leader of the Green Party, stated: “Building a nuclear energy station with the sort of subsidy the Government is speaking about will lock in raised electrical energy costs for years to come back.

The large-scale Suffolk station is a part of a fleet of recent nuclear energy crops on the coronary heart of the Government’s vitality technique, during which Prime Minister Boris Johnson final month set out goals to spice up new nuclear energy, offshore wind and hydrogen.

In January, the Government introduced £100 million of funding to help Sizewell C’s continued improvement, with the transfer aimed to draw additional financing from personal traders.

If constructed, Sizewell C would energy the equal of about six million houses, in addition to help as much as 10,000 jobs in Suffolk and throughout the UK.

Its building is anticipated to price round £20 billion and it could be a near-identical reproduction of Hinkley Point C, the plant presently beneath building in Somerset.