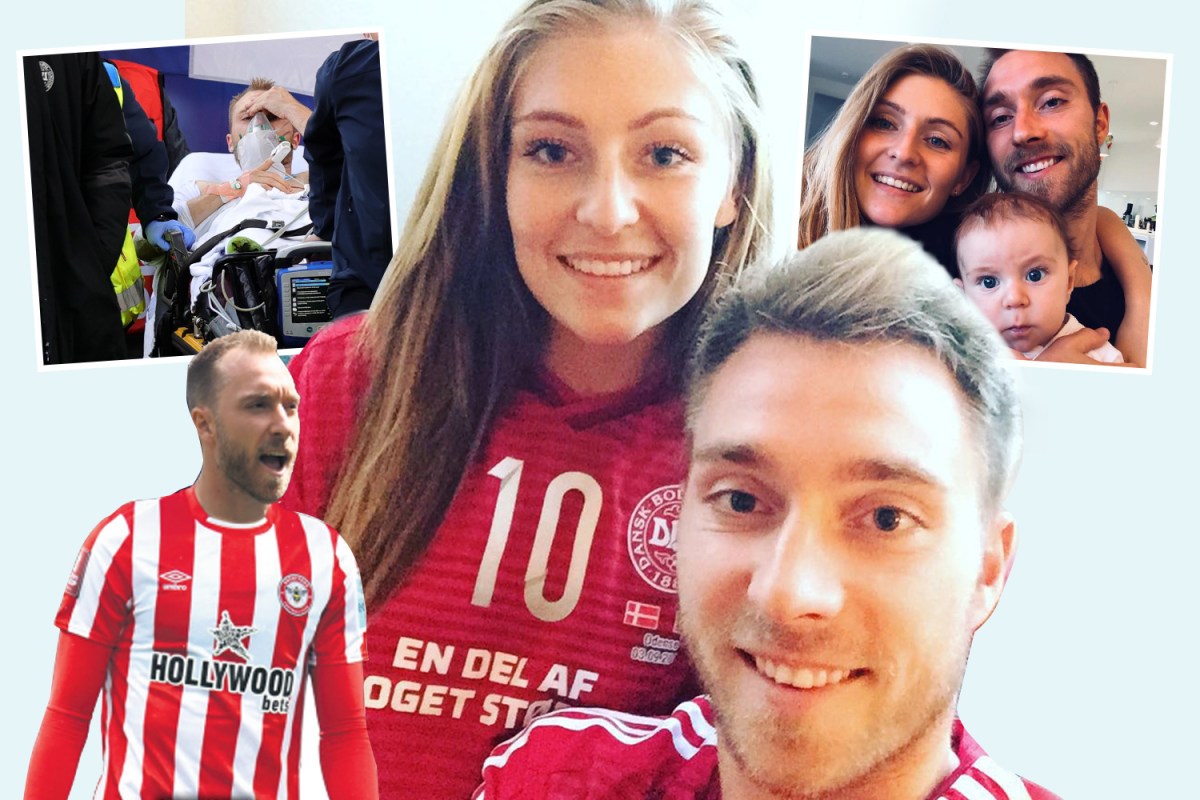 SHROUDED from view by his weeping teammates, Christian Eriksen “died for five minutes” as millions of Euro 2020 viewers looked on aghast.

Today, less than eight months after having a cardiac arrest on the pitch while playing for Denmark, he’s preparing for a Premier League return as he begins training with his new team.

And loyal girlfriend Sabrina Kvist Jensen is supporting his fairytale comeback at West London club Brentford — which he hopes will be the first step in fulfilling his dream of playing in this year’s World Cup.

Midfielder Eriksen, 29, who spent six and a half  years at Tottenham, said: “If Sabrina had said, ‘I don’t want you to play any more,’ this would be a very different situation.

“Of course, we have a trauma from June 12, but since then we have found our bearings so that Sabrina is OK with me going to the gym for a few hours and to the practice field.

“She trusts that when I go, I always come back.”

Immediately after the harrowing collapse, Eriksen told the mother of his one-year-old daughter and son Alfred, three, there was “no way” he would return to football.

The distraught hairdresser leapt over the barriers to be at his side when he collapsed at  Copenhagen’s Parken Stadium.

According to Denmark’s legendary goalie Peter Schmeichel — whose son Kasper was their keeper that day — devoted Sabrina, now 27, initially assumed her partner was dead.

Ex-Manchester United star Peter said: “You could see from the reaction of Kasper running over to her to say Christian is breathing, she actually believed he had passed away.”

The Bees’ new signing will play with a pacemaker-type device called an implantable cardioverter defibrillator (ICD) — and he is the only known Premier League player who has the  implement, which can restart his heart.

He revealed: “Worst case, if it happens again, this thing helps me right away. It’s very reassuring.”

But he isn’t content with merely returning to British top-flight football.

Eriksen revealed: “My goal is to play at the World Cup in Qatar. This has been my mindset all along.

“I’m sure I can come back because I don’t feel any different. Physically, I’m back in top shape.”

Another person who will be delighted with Eriksen’s progress is his former team mate at Spurs, Harry Kane. The England skipper was “numb with shock” after the Dane’s horror collapse at the delayed Euros.

The Three Lions striker led well-wishes to Eriksen as he lay in hospital. His wife Katie, 29, also called Sabrina to offer her support.

The two couples would go out as a foursome after Eriksen signed for Spurs in 2013. They were spotted together at Zuma sushi restaurant in Knightsbridge and a Bruno Mars concert at the O2 Arena.

The teatime Euro 2020 fixture between Denmark and Finland, when Eriksen collapsed, will remain indelibly etched on the minds of all who witnessed it.

In the 42nd minute Eriksen — waiting to receive a throw-in — stumbled and fell forwards.

The Danish players — some crying and others with their hands clasped in prayer — gathered around the fallen superstar to shield him from view.

It was nearly 20 minutes before the player was transferred to a stretcher and carried off the field.

Fans around the globe were buoyed by the sight of a conscious Eriksen resting his hand on his forehead.

Recalling the build-up to the game, he told Danish TV station DR1 last month: “I felt like normal. I remember (Joakim) Maehle’s throw-in. I remember being hit by the ball and I passed it back using my shin.

“I felt a small cramp in my calf and then I blacked out.

“When I woke up from the CPR it was like waking from a dream.

“I don’t remember a thing from when I passed out. I’m on my back when I wake up. I feel them pressing on me. I struggled to breathe — and then I heard faint voices and doctors talking.

The Danish team’s talisman clearly recalls fans singing his name as he was stretchered to an ambulance.

He revealed: “I remember the white linen around me to shield me from view.

“I look up and see the fans singing. I get carried out to the ambulance.

“It’s not until I’m in the ambulance that I realise I had been dead.

“I tell my fiancée Sabrina the same — ‘I’m not going to play again, no way’.”

The then-Inter Milan midfielder added: “At the hospital, they kept saying I’d received more and more flowers. I didn’t expect people to send flowers because I’d died for five minutes.

“It had an impact on so many people, and they felt a need to let me and my family know. That makes me very happy.”

The footballer was fitted with an ICD and has returned to full health.

‘Besides being a superstar, he is very down to earth’

Dr Malcolm Finlay, a consultant cardiologist  at London Bridge Hospital, describes an ICD as a “parachute”.

He said: “It listens to the heartbeat and if the heart runs to a crazily fast rhythm, then the computer delivers an electric shock to the heart.”

As Denmark progressed through the tournament to a semi-final encounter with England at Wembley, Eriksen admits he craved being out on the pitch. He explained: “I was happy they got so far, but I wanted to be there.”

At just 29, the lure of top-flight football was still strong for this supreme competitor as the months went by. A wealthy man following a stellar career at Ajax, Tottenham and Inter, he still felt he had a footballing itch to scratch.

To regain full fitness, he worked with a personal trainer at Swiss club FC Chiasso, a one-hour drive from his Milan apartment.

Yet he could not continue with Inter as rules in Italy forbid players from competing with heart-monitoring devices.

On transfer deadline day last week,  Brentford announced they had got their man on a six-month deal — the highest-profile player in the club’s history.

Brentford’s Danish manager Thomas Frank, 48, said: “Besides being a top player and superstar, he is very humble and down to earth. That is a big quality. Because of what happened, some of the bigger clubs weren’t interested to take the chance.”

Eriksen’s arrival has prompted  Brentford strips to sell at 30 times the usual rate as fans from South Korea, the US, Australia and Greenland snap up the red-and-white shirts.

Brentford said for confidentiality reasons it won’t be releasing details of the stringent medical tests Eriksen has had.

But Frank said: “The specialists that have seen him know that everything is perfect.”

But ex-Bolton Wanderers star Fabrice Muamba, who retired from professional football after a cardiac arrest on the pitch, said he was “worried” about  Eriksen’s return. Muamba, 33, who also has an ICD, collapsed on the pitch at  Tottenham in 2012 and was resuscitated after 78 minutes.

He revealed on his YouTube channel:  “I’m not saying it’s going to happen again but the medical staff will always say to you it might happen.”

However, Eriksen says he’s not worried “in the slightest” about collapsing again.

He said: “I have been cleared and monitored and tested.

“I worried I would be afraid there (the pitch) but I’m not. So people can stop worrying.”

After his first training session with the Bees today, manager Frank will assess when he can start his first game.

The club’s head coach said: “It is going to be an unbelievable day when he steps on to the pitch.

“It is a little bit of a miracle that he wants to play football again.”

Players who got extra time

CHRISTIAN Eriksen is not the only footballer to play on with an ICD.

German Daniel Engelbrecht was 22 when he had a cardiac arrest on the pitch playing for third-tier Stuttgarter Kickers in 2013.

The former striker said: “The love of football was bigger than the fear of dying. That was the reason I played again.”

The ICD came to his rescue three times – in hospital, in a match and in training – before he hung up his boots in 2018.

“The second point was that, every day I went to training, I was afraid to die.

The third point was that my family told me their biggest fear was calling me after training or a game and never getting an answer.”
Belgian defender Anthony Van Loo, 33, was diagnosed with a heart condition in 2008 but played on after getting  an ICD.

YouTube footage from 2009 shows him collapsing during a match before a jolt from his ICD made him spasm and sit up.

He collapsed during a game once more in 2018 and, despite making a recovery, he retired from football for good.

In 2019, former Manchester United defender Daley Blind was fitted with an ICD after feeling dizzy while playing for Ajax. He was diagnosed with heart muscle inflammation known as cardiomyopathy.

The next year his ICD went off during a pre-season warm-up match. He sat down but was able to walk off the pitch.