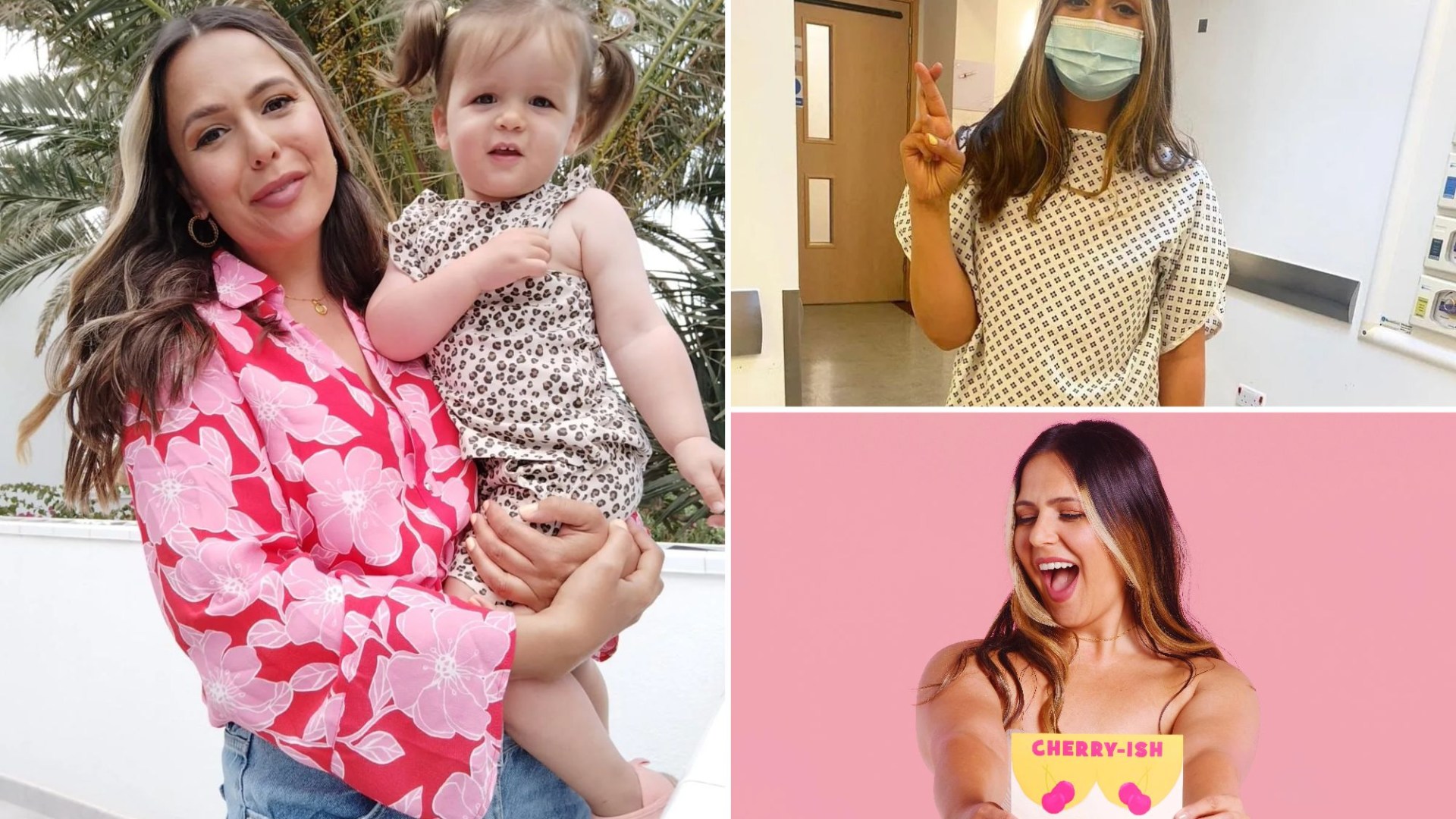 WE’VE all had that lightbulb moment when we decide to go on a health kick.

For Hannah Gardener, that came when she was just 26 years old.

She had been setting up her new gym equipment when she felt a pull – but with no family history of illness – she assumed it was just a strained muscle.

In that moment, the clinical trial manager from Twickenham had no idea that it would turn into a life changing diagnosis – breast cancer.

Since the mum-of-one’s initial diagnosis of grade 3 breast cancer in 2013, the illness has returned three times.

Now, Hannah, 36, says she doesn’t want her little girl Lilah-Rae to grow up without a mum and says she wants all women to get into the habit of checking their boobs – as it could just save your life. 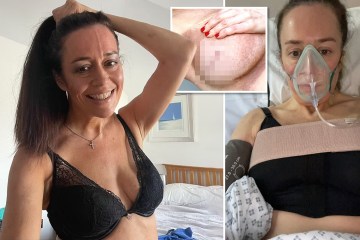 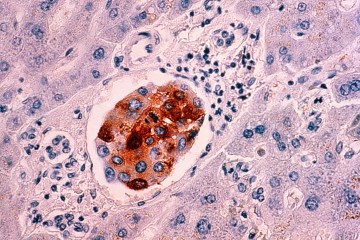 At 26, Hannah said she had a relatively normal life.

She had been working away at the time and was ‘living for the weekend’, and would look forward to going out and spending time with her friends.

But like many people, she decided to go on a health kick, and one afternoon she had been setting up a treadmill in her living room.

Speaking to The Sun, she said: “It was really random”.

“I’d been setting up a treadmill and it turns out they are pretty heavy and in the process I thought I had pulled a chest muscle.

“I started rubbing my pec muscle and then felt a lump, deep within the boob, it was unmistakable.

“I was pretty shocked that I hadn’t noticed it before,” she said.

At the time, Hannah said her mind didn’t immediately turn to cancer, but she knew it was something she had to get checked out.

The mum-of-one, who is working with Moonpig on their Change + Check campaign, said she then booked in for an appointment.

Because Hannah had undergone a breast enlargement a year before, she thought she should go to her surgeon to get it checked out.

She added: “I’m glad I did, as when he examined me, he told me that it was my own breast tissue and that I needed to see my GP.”

The 7 signs of breast cancer you need to know

Breasts come in all shapes and sizes – and can look and feel different throughout a woman’s life.

The NHS says there are seven signs you need to look out for when it comes to breast cancer.

If you are concerned or notice any of these symptoms, visit your GP.

In the event of an emergency, always call 999.

Armed with this information, Hannah booked in with her doctor.

On being examined, Hannah said the GP informed her that they ‘couldn’t feel’ the lump.

Hannah said: “If I hadn’t seen the plastic surgeon, I might not have pushed it, I thought it was strange.

“Because I pushed, the GP referred me. But since then I have heard of other young women presenting to their GP with lumps and being told they are hormonal changes and being sent away.

Hannah was referred to the breast unit at Charing Cross Hospital in London, where she was examined by a specialist who told her they could feel something, and sent her for an ultrasound.

“It was then I felt the mood in the room change,” Hannah said.

Medics then asked Hannah if she was happy to have a mammogram – which is a procedure they don’t usually carry out on younger women due to the density of the breast tissue.

It was then Hannah was told that there were some microcalcifications in her breast, and that while it could be nothing, there was a possibility that it was something serious.

“I went away and I was absolutely stunned. I was holding onto hope, I was just so young and thought maybe my boobs are just doing something weird.”

The next week, Hannah was diagnosed with grade 3 breast cancer and medics told her that her tumour was around 10cm in size.

“It hit me like a tonne of bricks”, Hannah said.

“Answers don’t come fast when you’re first diagnosed and at first I had to have a mastectomy.

“They said it was invasive grade 3 cancer which had spread to my lymph nodes.”

Then, came the non-negotiable removal of her breast implants, along with more chemotherapy.

But Hannah’s journey wasn’t over year and in 2017, medics detected a local recurrence in her chest wall and she was moved over to the Royal Marsden for treatment.

Due to the illness, Hannah was told she would be unable to have a baby due to her ovarian reserve.

But she managed to fall pregnant naturally late 2019 and gave birth to a baby girl, Lilah Rae in July 2020.

Things had started to look up for Hannah, but in December 2020, she said she was ‘blindsided’ when the cancer returned for a third time with a loco regional recurrence in her underarm.

“It was under my arm, I wasn’t expecting it. Having cancer through the pandemic was such a lonely experience.

“When I’d had treatment before you could smile and laugh with the nurses and other patients, but there were no smiles through the masks.”

In June 2022, Hannah was given the devastating news that she had stage 4 cancer, meaning she would be receiving treatment for the rest of her life when she was told it had spread to her liver.

She said: “I’d had cancer twice before without a child. I’d always look at people with kids who had cancer and just think ‘how have you done it’.

“When you have a child everything changes, my fear and pain begins and ends with her.

“I don’t want her to lose her mum- it’s her I have to fight for, as well as myself.

“I lost my mum before Lilah was born. I don’t want Lilah to experience that loss so young. She’s an innocent child facing something life-changing because of cancer. It’s not fair.”

She added: “My current diagnosis has resulted in a mindset change – treatment won’t finish for me, so I focus on life day-by-day.

“I’ve also learnt to be kinder to myself – we’d never speak to someone else  the way you speak to ourselves at times. I’m also keen to encourage others not to sweat the small stuff and focus their energy where it best serves them instead.”

As part of the Moonpig campaign, which is giving Brits the opportunity to send free breast check cards to remind each other to check your boobs on a regular basis, Hannah is urging everyone to make sure they take note of symptoms and signs.

“I never checked myself. It was never on my radar. This all started 10 years ago, I was just 26-years-old.

“I thought it was pointless – mainly because I didn’t have a family history of breast cancer so I just thought I didn’t really have to worry.

“I always thought to be diagnosed so young, you would need a family history of the illness.”

Looking back on her ordeal, Hannah says if she could give one piece of advice to young women, it would be to check your boobs.

She said this is important even if you’ve already had cancer.

“You must be body aware”, she said. “Check out any unusual lumps and bumps.

“One in three people who have had cancer go on to develop secondary cancer and there is still hope if it’s detected early.

“Knowledge is power,” she said.

On the importance of awareness, Hannah said the Moonpig campaign is key when it comes to encouraging more people to check their breasts.

She added: “If there’s anything my experience can teach people, I hope it’s the importance of being body aware.

“The free cards Moonpig designed are cheeky and fun but carry a serious message. I love that there’s a pre-written message inside for those that don’t know how, or quite what to say. But it can be edited for those that do.

“Breast Cancer Awareness should be a year-round conversation, so I’d encourage people to stick the cards up in their homes or on their mirrors and remind themselves to get anything they’re unsure of checked out– and to tell friends to do so too. Early detection, for many, is essential.”