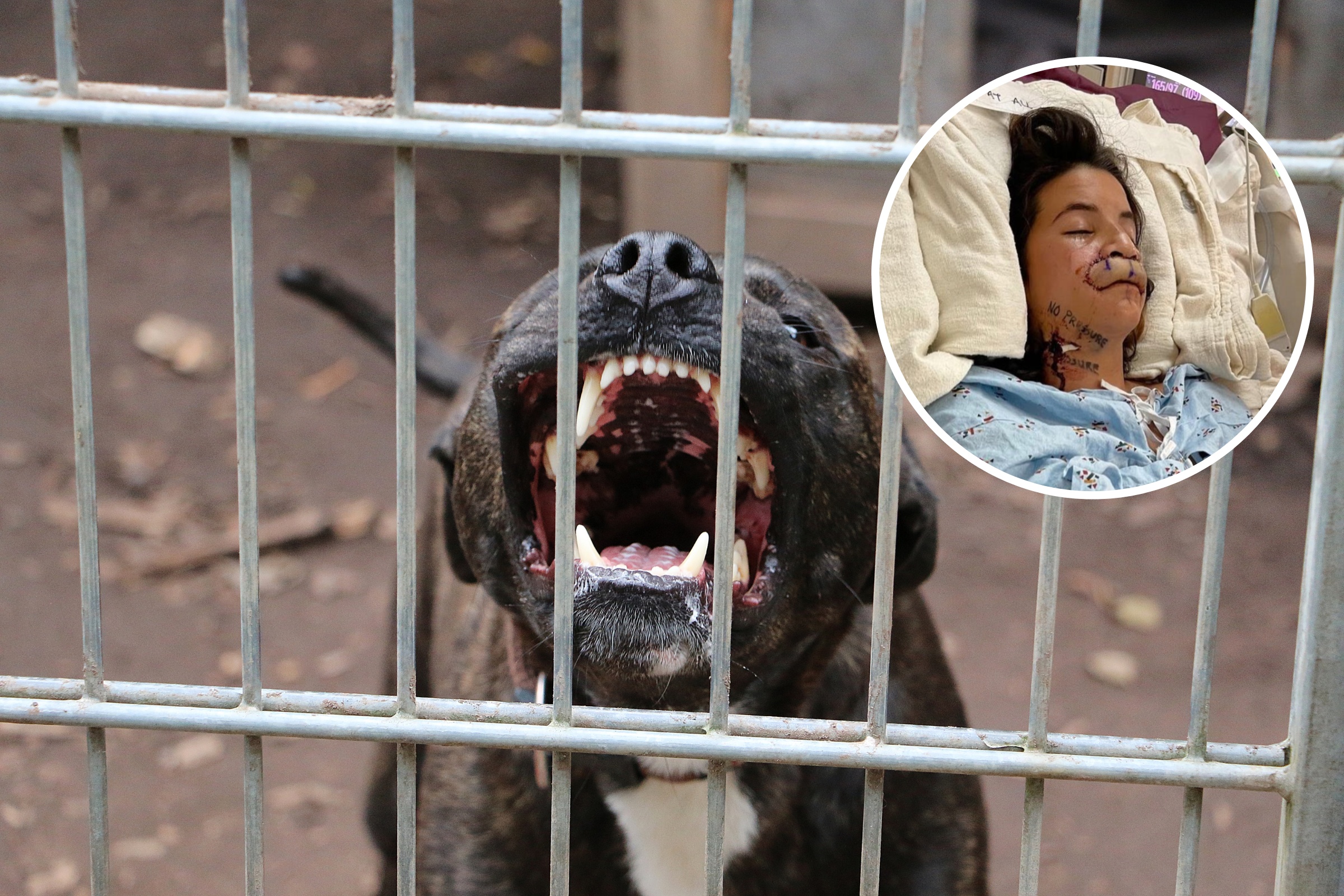 I was attacked by my cousin’s pit bull on November 3, 2020. I had met my cousin’s dog many times in the past; my cousin brought him home when he was eight weeks old and he was fully trained, which is why the attack was shocking. He had never shown any violence towards me or anyone else before.

I’m originally from California, but I was visiting my cousins in Arizona when the attack happened. There are a lot of really interesting things that happened in the lead up. Fifteen minutes before, I went to a nutrition shop and the girl who worked there randomly looked at me and said: “I just want you to know that whatever you go through, you’re going to remain positive.” I replied, “Oh, thank you. That means a lot.”

As I walked through the store, she saw me again and continued to tell me that whatever I went through, I was going to remain positive. Little did I know that minutes later, I would be attacked and my life would change forever.

After the nutrition shop, I then went to my cousin’s apartment because we were going to have lunch. I had a zit on my upper lip and I was really insecure about that at the time because if you have a little blemish, often, society makes you think that there’s something wrong with you. I was so insecure about the zit that I remember taking a picture and cropping my upper lip out. A few minutes later, my whole upper lip was gone. My attack allowed me to put a lot into perspective and to be grateful for what I have.

The pit bull attack that changed my life

When the attack happened, I was in my cousin’s kitchen, waiting for her to finish placing pots and pans in the cabinets. Her dog was sitting close to me, but I wasn’t by his bowl or his food. I hadn’t done anything that could have potentially triggered him. As he was sitting down, I pet his head, and I turned to look at my cousin. When I turned back to face him, he had sprung up from the ground and was hanging on my upper lip.

At that moment, the instinct to protect myself kicked in. So, I grabbed his head and was pushing him back. If I hadn’t I done that, I think a lot more damage would have been done. He hung on to my top lip for 50 to 60 seconds, and all I could see were his gums, but I didn’t scream or make a loud noise because of the shock that I was in.

The force of his biting was shaking my head, but I finally pushed him off. As soon as that happened, something from his mouth flew through the air and hit the wall. I didn’t realize that he had bitten off my top lip. I took in a breath of fresh air and it felt like somebody had shoved dry ice up my nose.

Because of the adrenalin, I didn’t feel pain at all. I also didn’t know how badly he had attacked me. At the time, I just thought that he had maybe bruised my lip. I then felt a metallic taste in my mouth and looked down to see that my shirt and my hands were covered in blood.

When my cousin finally turned around to face me, she was in shock. She kept telling me that I was going to sue her when I saw what had happened to me. I took out my phone and opened my camera and saw that my whole top lip was missing. I was bleeding a lot and I knew that I needed to get to a hospital as soon as possible.

I remember standing over the bathroom sink, watching blood leaking from my mouth. It was when I put my hands on the sink, and finally looked up at myself in the mirror, that I began to really process what had happened to me. I was in disbelief.

The hospital was a 10-minute drive, and when we arrived there, one employee threw a rag on my face and told me to cover up because she couldn’t look at me. Meanwhile, I was worried about fainting because I had lost a lot of blood. Thankfully, I was seen within 15 minutes.

I had to wait nine hours for the doctors to operate on me because a surgeon had to be called to the hospital; he drove 6 hours to see me. I was then transferred to another hospital that was 45 minutes away in the ambulance.

The ambulance driver said to me, “You’re the calmest person I’ve had today.” I thought that there was no point panicking and during that time, I still hadn’t felt any physical pain.

I didn’t get to see my parents before my surgery. I also had no idea what I was going to look like after. The nurse handed me papers to sign and I saw that one risk of the operation was that I could die.

I kept thinking: This shouldn’t be happening to me. A nurse even looked at me and said, “This should have never happened to you” and began crying. I needed someone to tell me that I was going to be okay and that I would get through it.

Then the anesthesiologist looked at me and said: “You’re going to be okay, I promise. You live in California. That’s the surgeon’s state.”

What happened to my cousin’s pit bull

Unfortunately, following the attack, animal control had no other choice but to put my cousin’s dog down. It was unfortunate to me, because I felt empathetic toward everyone that was involved in the situation.

I know plenty of people that have pit bulls. They absolutely love their dogs, and they would swear by the book that they would never do any harm to anyone. And I have met nice pit bulls, but I’ve also met my cousin’s dog, who was nice but ended up attacking me.

So, for me, having a pit bull would probably feel like having a loaded gun; you genuinely don’t know what’s going to happen. That’s why I would never own one.

However, I have seen pit bulls since my attack and I’ve not been scared of them; I’ve just been more aware of what they can do. I still genuinely love dogs, but I’m just more cautious of them in general.

I believe that everyone has the right to do as they please. All I can do is share my story. It’s weird because ever since I was a child, my dad would warn me about pit bulls, and I wouldn’t listen. I used to say: “All dogs are nice.” And then once I got attacked, I felt that my dad had been right.

Sharing my story on social media

Posting about my attack online has received a very controversial reaction. Although I have never spoken badly about pit bulls, I get a lot of hateful comments. I’ve had many messages on TikTok from people telling me that I deserve to die for sharing my story. But I’m not going to listen to anyone, I don’t care about people’s opinions.

It’s such a mental battle going out in public every day, people sometimes look at me and point, or ask questions. But still, I’m happy to tell my story.

Some positive things have happened too. Somebody told me that my posts had stopped them from taking their own life. Having that conversation with her reminded me of why I began posting about my story in the first place. She told me that I helped her through her mental battle, which I was so grateful for.

Working after the attack

I had modeled in the past, and I was really excited to continue to do so. But currently, I’m in a weird position. I don’t really have a career as a model because I’m still going through multiple surgeries. I live in Los Angeles, and there, the majority of people care about the way that you look.

When I would take up modeling opportunities, I would sometimes be asked: “When will your face be fixed?” I respond by explaining that it is currently in the process of being fixed and I am still going through surgeries.

Those types of conversations make me think that maybe I may not be ready to model in the same capacity that I did before. But social media is still great for me. I’m lucky enough to have an income doing what I love, which is skateboarding. I couldn’t have asked for anything better. I still also believe that everything happens for a reason.

My attack was horrible, but it has also humbled me. I always say, hug someone you love today. There are so many people struggling, and we can never judge a book by its cover because we have no idea what somebody may be going through.

Brooklinn Khoury is a YouTuber, content creator and influencer. You can find out more about her here.

All views expressed in this article are the author’s own.

Do you have a unique experience or personal story to share? Email the My Turn team at myturn@newsweek.com