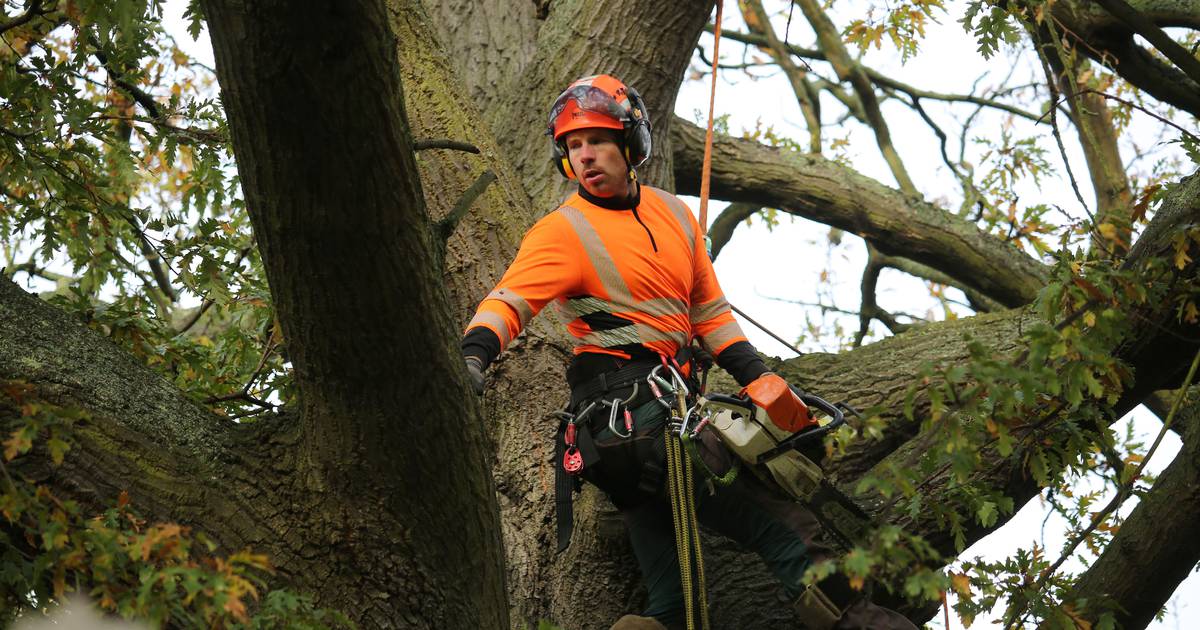 I’m from Athboy, Co Meath. I’m the third generation at timber, my uncle was at it, my grandfather and even all on my granny’s side.

I was always into chainsaws and timber. I never had to learn how to use a chainsaw, I was brought up around them where you would cut firewood for the winter for yourself. There were always chainsaws lying around. I think when it’s in the bloodline, you can do all the training you want, but it’s either in you or it’s not.

It was only in my 20s that tree surgery really properly took off as a career. The big, more awkward jobs, that’s generally where I come into play.

‘What I Do’ – Wesley Monaghan from Navan Co. Meath is a third generation tree surgeon and award-winning lumberjack who is passionate about his work.

The job I did today at Glasnevin cemetery was pure adrenaline. There was a row of 200-year-old trees. One was an oak and others were beech. One of the beeches had fallen in a storm two years ago. It did damage to headstones that are irreplaceable. The trees were condemned. Because there was rot and because of the damage they could do, they had to come down. The oak tree was probably the most awkward – where it had to come down, the drop zone was small and the setting up of the crane between the gravestones was very tight.

The crane is holding on to the big limbs and then I’m tied on to different limbs of the tree with ropes and a harness, and I can swing down then to whatever I am cutting. The crane is taking the weight. I do massive trees with cranes all the time, but today was an exceptional job, probably one of the most awkward I have ever done.

The beech trees was 90-100ft and the oak 70-80ft. But the girth, it had some gnarls and burls, and it was definitely seven or eight feet in places. So much could go wrong. When it’s big and awkward, I’m really challenged. Those are the days I have little chats with myself, and little chats with the trees saying ‘look it, it’s the end of the line’ in the nicest way. There were limbs falling off, and I said ‘I’m only up here to do a job’. People think I’m mad but in the back of my head I’m thinking, this tree is listening. It knows the craic. I feel they understand.

The work is very technical. Sometimes they can’t get anyone else to do the job. I’m the one doing it with a four-man crew. I’ve managed to keep a good crew. The machines won’t get it all done, it’s still very physical. You are not coming home unfit to drink a cup of tea these days, but back when I started out, it was exactly that. I had no machines and it was such hard work.

I love trees, of course I do. I have a serious appreciation for the tree. Trees have a lifespan and when they fall, there’s potential for damage. You have to weigh that up.

Today in particular, this hundreds-of-years-old oak tree, the stories it could tell. The things it has seen. But there was no way of retaining it and still looking as majestic as it was. As much as I love trees, it’s more that I love what I do. Not necessarily cutting them down, but pruning them and trying to retain them.

I keep myself fit. When you are flexible and fit, it is so much more enjoyable. I look after myself nearly like an athlete. Lumberjacking is a huge sport. There are a couple of Irish championships and I won the last four. I’ve represented Ireland at the European and the World Championships. I am super competitive. As good as it was to travel, it was so time-consuming to be the best. It was getting in the way of work.

I don’t think about the height. I need to be up there to get the job done, but if you put me on a balance beam 80ft high, that would be nerve-wracking. You have to do training for insurance and I have Level Six in arboriculture. You can’t be over-confident. Touch wood, I’ve never had an accident, or a tree that went wrong.

When I started, I didn’t think I’d get a week’s wages at it. I can’t believe what I’ve managed to achieve, but it’s pure hard work. I’m lucky that I really love what I do. – In conversation with Joanne Hunt