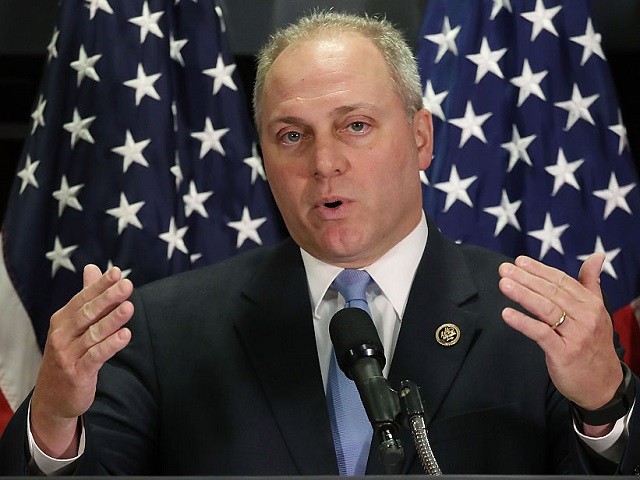 Wednesday on FNC’s “America Reports,” House Minority Whip Steve Scalise (R-LA) acknowledged he was supporting House Minority Leader Kevin McCarthy for speaker in elections set to take place next week under what appears to be a new GOP-led House of Representatives.

Scalise dismissed speculation he was seeking the speakership. Earlier in the day, he formally announced his bid for House Majority Leader.

“All right, so let me ask you about the politics in the Republican conference because the Republican minority leader, Kevin McCarthy, has just issued a dear friend letter saying that he intends to run for speaker,” FNC host Johns Roberts said. “Our Jacqui Heinrich was reporting last night, though, that given the fact that the — the majority in the House may be much slimmer than people thought that it would, that the knives may be out for McCarthy, and that you may be making a play for speaker. What do you say about that talk?”

“Well, look, we’re going to have our elections next week,” Scalise replied. “I’m supporting Kevin McCarthy for speaker, and he will win that race. And, ultimately, you have seen us pull together these last few months and focus on the attack against big government socialism. What they have done to our country and our economy is what’s united not only Republicans but, again, we have — we have already won in a number of places Republicans haven’t won in decades last night.”

“And the races that are outstanding, we still can win more of those, which means people in very different places of America said they don’t want big government socialism, and they’re going to give us the House to be that check and balance,” he added. “And we’re going to go to work for those hardworking families. We ran on an agenda. We’re going to go and pass that agenda through the House.”