“As history has shown us, international educational exchange bounces back. And less than two years following the outbreak of the Covid-19 pandemic, student mobility has rebounded,” said Mirka Martel, head of research, evaluation and learning at IIE.

The fall snapshot data was even more encouraging, with numbers increasing by 9%, building on the 4% rebound in the 2021/22 data.

In terms of financial contribution, Open Doors data analysed by NAFSA concluded that international students are contributing an increased amount to the economy – $33.8bn, up by over $10bn from last year’s data.

“[This data] is heartening, but we’re definitely below where we were pre-pandemic in terms of the economic contribution. We do feel there is more to be done,” Rachel Banks, spokesperson for NAFSA, told The PIE News.

One of the most notable figures from the Open Doors data was the sharp drop in students from China across both undergraduate and OPT – down by 13% and 22%, respectively. While it remained the biggest source country, the totals dropped by 9% from the previous year – and only saw an increase in graduate enrolments, with 4%.

Ethan Rosenzweig, deputy assistant secretary for academic programs at the bureau of educational and cultural affairs at the US Department of State, stressed that despite the figures, China was still a priority for recruitment. 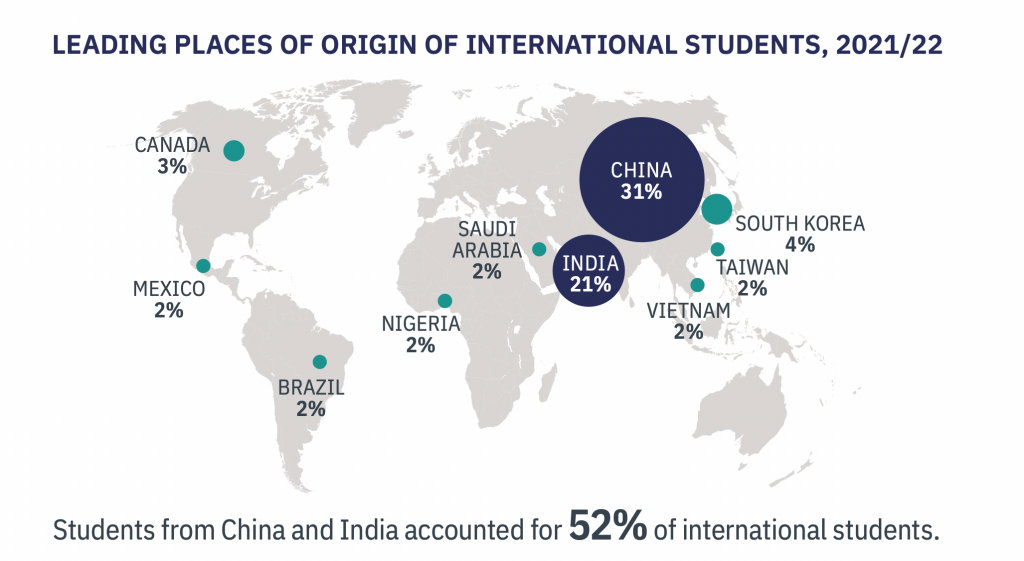 “Health, safety and welfare of all students on US campuses is a top priority. The Biden administration has been very clear that Chinese students are welcome here,” he commented.

“China remains the top sending country with almost 300,000 students on US campuses. Our universities continue to value Chinese students, prioritising recruitment in the PRC and welcoming students on their campuses and in their communities.

“As someone who had two decades of higher education experience, I’m looking forward to the PRC opening its borders for US universities to recruit in-person in the PRC very soon as well,” he added.

On the other hand, India saw one of the biggest jumps in enrolment, increasing by 19% from the previous year – with a total of just under 200,000 students – also possibly down to a staggering 48% growth in graduate students.

South Korea and Canada, third and fourth respectively in terms of students in the US, also grew by 3% and 7%, respectively.

Large jumps were seen too in students from Germany and Spain, which saw whopping increases of 59% and 41% year-on-year in student numbers, as well as France (37%) and the UK also jumped 28% from the previous year.

Saudi Arabia, like China, saw a large decrease in student numbers, losing 17% from last year’s figures. Vietnam, which had 21,631 students in the US last academic year, saw almost 1,000 fewer students – a 4% decrease.

For the first time in a decade, there were “more [international] graduate students at US universities than there were undergraduates”; likely due to the 17% increase in graduate students, taking the total to 385,097, which also pushed the graduate numbers to higher than pre-pandemic.

“It’s also important to note that we see students recognising that there’s opportunities at all levels of education for them in the US, including the hands-on opportunities to do a graduate degree here,” said Rosenzweig. 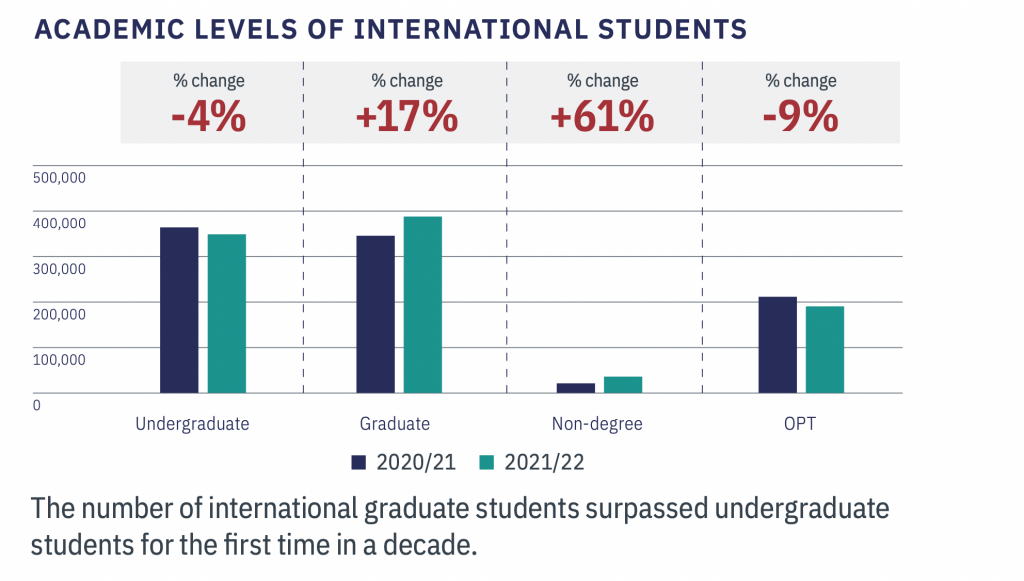 “We’re proud that we are still the top destination for international students. And now we see this great hunger for graduate study as well,” Rosenzweig added.

India saw the biggest student numbers in OPT out of any nationality – over a third of the 184,000. While general OPT figures seemed to be slightly down year on year, down 9.4%, Banks is encouraged by the current administration’s approach to the program.

The fall snapshot also revealed that OPT is now trending up, with a 6% increase.

Seeing a 5% jump was physical and life sciences, which made up 8% of total student numbers – health professions, however, saw a 1% drop from last year, and communications was down over 4%.

“Now we see this great hunger for graduate study”

A sizeable majority of those studying in the US – over 525,500 – were funding their degrees in the country through personal means or with help from family. Another 20% were getting assistance from a US college or university.

Almost 20% of those who were studying were funding their degrees working at the same time, with 187,907 in current employment.

NAFSA also found that for every three international students studying in the US, one job is created – supporting over 335,000 jobs this academic year. Banks told The PIE that even with the student number rebound, the financial contribution continues to lag behind pre-pandemic levels – and action from the government is necessary.

“We still struggle with policymaking in this country as we have not seen changes that would make the US more attractive for international students, such as improved visa processing and immigration law, such as allowing dual intent for F-1 students,” Banks added.