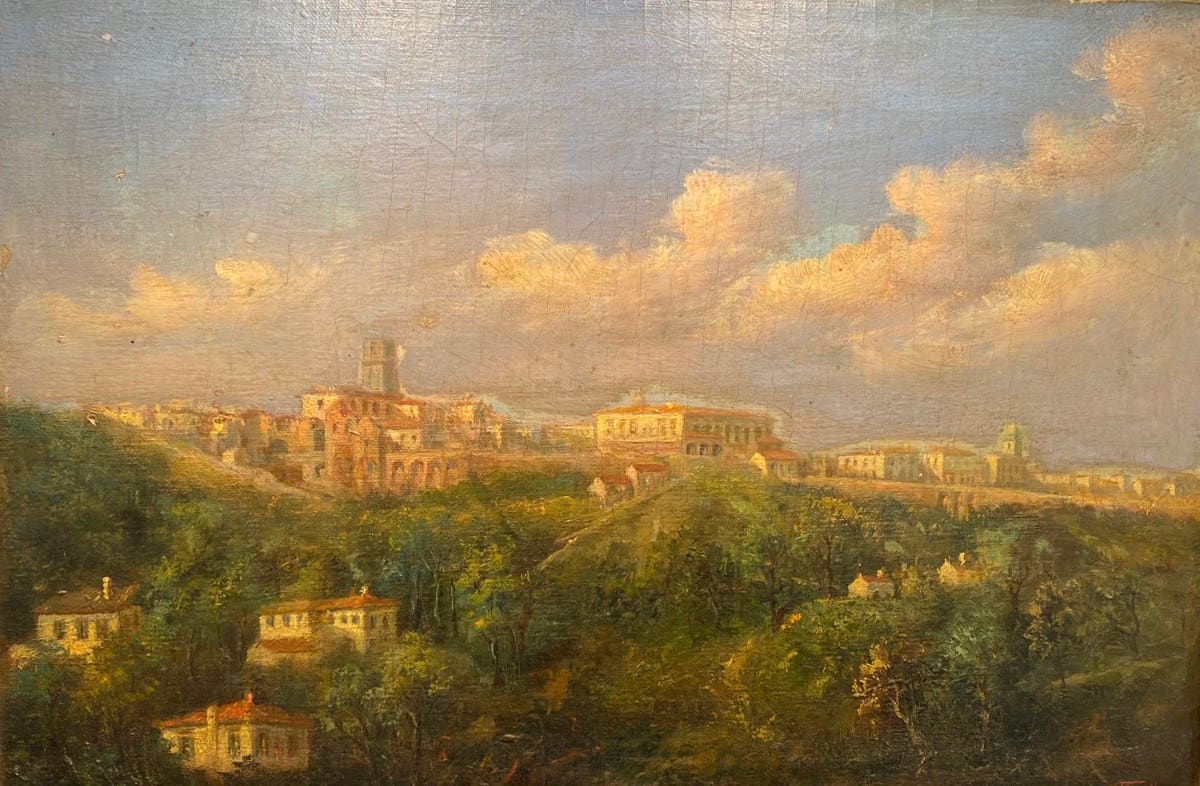 One may not be able to live in the past but by going back to where your ancestors came from you can evoke it in ways that will stay with you forever. In the case of my family, both sides had emigrated from small Italian hill towns in the late 19th century—my father’s side from Abruzzo, my mother’s from Campania—at a time when leaving Italy was an option only after transAtlantic ocean travel became possible after centuries when it would have been unimaginable.

All of my immigrant ancestors fully realized the American Dream, but never forgot, nor freed themselves from, a longing for the places they and their forebears had dwelled for so many centuries. When, after many years, they could afford to return, they did so and were welcomed back by family members who had stayed behind.

Italy is freckled with such hill towns, many so high up that many inhabitants spent their entire lives there without ever traveling elsewhere. The reason for the altitude was as a defense against invaders, who in many cases captured them anyway. (It took weeks for the American Army to dislodge the Germans from Monte Cassino during World War II.)

I have visited both towns, Vasto on the Adriatic Sea, and Laurino, tucked away in the mountains south of Naples and north of Calabria. In the 19th century both were pretty grim places, poverty stricken and losing population.

Today, Vasto is a major tourist destination for Germans, French and Brits, who stay below the town at its marina. Laurino, which I shall write about at another time, is now a stable, charming dot on the map whose tranquility is a good part of its charm.

One need not have an ancestral link to Abruzzo, for anyone traveling through the land east of Rome, with its great plain and forests, long mountain range and beaches, will find it a cultural respite from the big tourist cities, and the province has the largest percentage of parkland in Italy.

Vasto had various names throughout history, including being called Istonio by the Fascists, then taking its present name in 1944, when Italians threw out the Black Shirts. Relics date back to 1300 BC and, as a seaside municipality, Vasto flourished under the Roman Empire, so that you can still see vestiges of Roman baths, a theater, mosaics and marble columns. Vasto also fell under domination by other invaders, including the Lombards and Normans, and was later part of the Kingdom of the Two Sicilies.

Much of the town’s lay-out was done in the 15th century, but was destroyed by the Turks in 1566. Under Spanish rule, Vasto thrived and eventually became part of the Unification of Italian states.

Its favorite son was the poet Gabriele Rossetti, who in political exile in 1821 fled to London. He was father to the  pre-Raphaelite  painter Dante Gabriel Rossetti and poet Christina Rossetti.

The painting at the top of this article by an unknown artist has hung on my family’s walls for a hundred years, and when I drove along the shore and looked up, the real Vasto looked exactly the same as in the painting. The central piazza has been preserved and new buildings lie either outside the old center or below at the marina. Once dark storefronts have been made over into chic boutiques, and the pasticcerias are full of colorful Abruzzese cakes and cookies, and the churches have been scrubbed free of centuries of grime and look like new.

There is, of course, a cathedral, the 13th century

Cattedrale di San Giuseppe, which is rather somber from the outside, but its restoration reveals a light and airy Romanesque interior. The Church of Santa Maria Maggiore, older by a century, was damaged by the Turks in 1566 and by a fire in 1645, so what you see now is an 18th century example of  baroque style, with an impressive duomo.  Supposedly it has a piece (one of many in Italy) of the crown of thorns worn by Jesus at his crucifixion.

Protecting the town from invaders since the 15th century is Caldoresco castle, perched on a promontory, though it is not open to the public.  The D’Avalos Palace, which holds the Musei Civici, is well worth entering; it, too, overlooks the Adriatic, and suffered via the Turkish invasion. Various factions compromised the building, but today it has been restored as the seat of Vasto’s archaeological and art history. And if you look for it, you can even find a tiny honorary garden with my great uncle’s name on it—Del Guercio—for having donated funds to the town’s restoration.

Vasto’s hotels are typical of the region and most go for well under $100 a night, including the lovely Locanda Baroni, built in the 15th century in the Old Town, whose rooms are currently $55. Many hotels and restaurants are located at the marina, including Il Corsaro, with seafood specialties including a rich seafood brodetto. In the Old Town, I like Lo Scudo, here since 1867, whose menu is solidly Abruzzese, including cavatelli with mussels, seafood risotto, brodetto alla Vastese, scapece del Vasto, fritto misto and chocolate tart with orange and pears. I have thoroughly enjoyed an all-seafood dinner at the colorful, minimally decorated Zi’Albini.

Though all my direct relatives left Vasto a century ago, I have acquired feelings that are now indelible about the town and I am as comfortable walking its streets now as if I had once lived among my ancestors. Not all home towns survive the rigors of history, and in Italy many that have are still in shambles. But when restored, like Vasto, they re-emerge, brighter than ever, not in the shadow of a troubled history but in the promise of a future open to everyone.