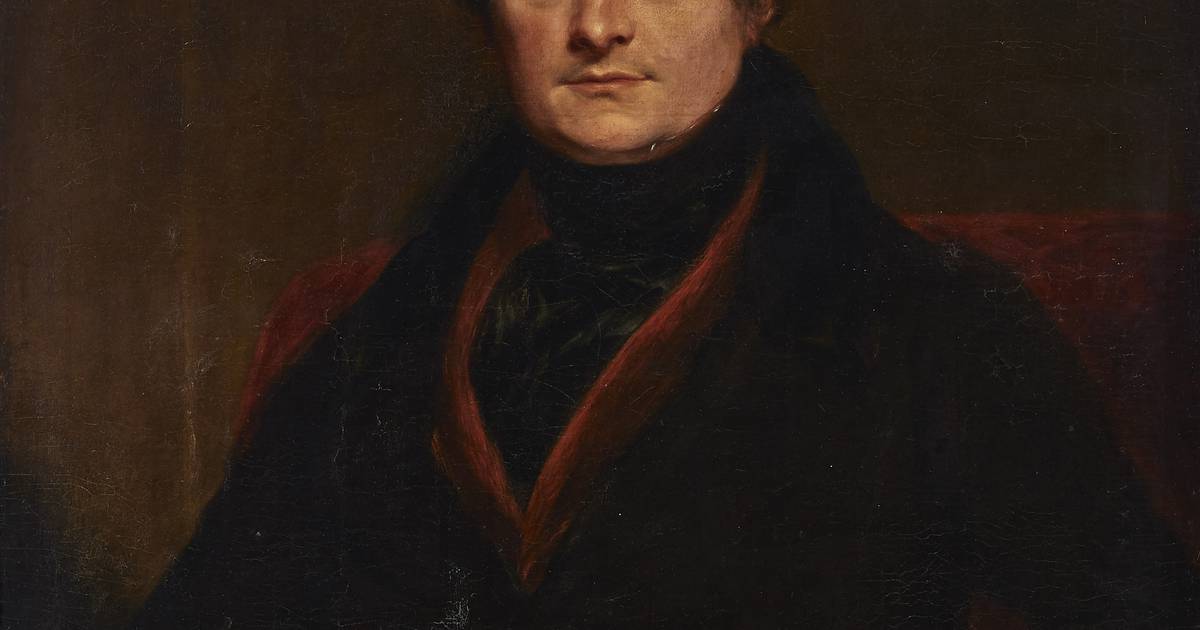 Often hailed as “an artist of the workers” due to his depiction of labourers, dockers, and aproned women, Harry Kernoff displays sympathy with the political left in Liberty Hall, Dublin (Night) (€20,000-€30,000) while Bend in the Road, Howth, is another Dublin scene where he masters the changing gradient of Howth Hill with jigsaw roofs and steep paths (€10,000-€15,000).

An intriguing portrait is of Daniel O’Connell by Martin Archer Shee. It is said to be the only known official portrait of the Cahersiveen native to depict him with his natural, receding hairline. Having personified the aspirations of nationalists for three decades, The Liberator often complained about his increasing girth and took to dieting, brisk walks and hot baths. But another curveball of middle age also irked him: his baldness. Sheer vanity saw him wear a wig from his early 40s, which continued well into his 70s, and many portraits of his elder years show him with a mop of floppy brown hair. The painting was previously in the collection of the Metropolitan Museum in New York (€12,000-€18,000).

Another impressive portrait is Lavery’s The Lady Parmoor (of Marian Cripps) which the auction house believes was a wedding gift from her husband 1st Baron Parmoor, Charles Cripps. Clad in furs, she was a staunch anti-war campaigner and went on to lead the World YMCA and the Women’s International League for Peace and Freedom (€40,000-€60,000).

Adam’s sale of Important Irish Art on September 28th is a wonderful showcase for the west of Ireland, with works ranging from the late 19th century to the present day, with diverse representations of life and landscape by artists such as Charles Lamb, Thomas Rose Miles, Gerard Dillon and Donald Teskey.

Painted from the D’Arcy Monument overlooking the western coastal town is Clifden, Connemara by Maurice MacGonigal. In catalogue notes, his son Ciaran remembers how his father waited for the perfect spring tide and light and how the frame to hold the canvas was so large they had to take a van to carry its 101cm by 126cm size. MacGonigal, who spent 50 years in Connemara, is buried in Gorteen graveyard in Roundstone (€15,000-€20,000).

Man on a Chair is an unusual portrait of Belfast-born artist Dillon, as it is not a mirror image as self-portraits normally are. In Modern Art in Ireland, the late Dorothy Walker described Dillon as “a genuine primitive self-taught painter, whose early work from the forties and fifties … are delightful” and this is certainly the case with this Connemara painting (€50,000-€80,000).

Described as “a superbly tactile painter of coastal landscapes” Donald Teskey, who is one of the leading Irish artists of his generation, found inspiration at the Ballinglen Arts Foundation in Ballycastle, north Mayo in the 1990s. His Broadhaven Bay V captures the vagaries of the coast and the sheer energy of the ocean (€15,000-€25,000).

Another artist who made the west his home was Armagh-born Charles Lamb. The sale has four scenes by the artist, including Cloudy Day (€3,000-€5,000); Coastal Landscape near Carraroe, Connemara (€2,000-€4,000) and two larger oils. In-shore Fishermen, which was exhibited at the Charles Lamb Memorial Exhibition in 1969, is listed at €8,000-€12,000, while his monumental portrait Fisherman with Lobster from 1937 depicts Pádraic Ghrealis from Rinn, husband to Nan Mhichíl Liam McDonagh, whose portrait by Lamb is in the National Gallery of Ireland (€15,000-€20,000). Both these large paintings were key works that graced the walls of Lamb’s Restaurant at the Seagoe Hotel in Portadown, the artist’s hometown.

In sculpture, Rory Breslin’s bronze The September Mask, is the ninth in the Clew Bay series “which chronicles and celebrates the emergence of native flora and fauna as they appear month by month” featuring blackberries, rosehips and a sparrow (€5,000-€8.000).