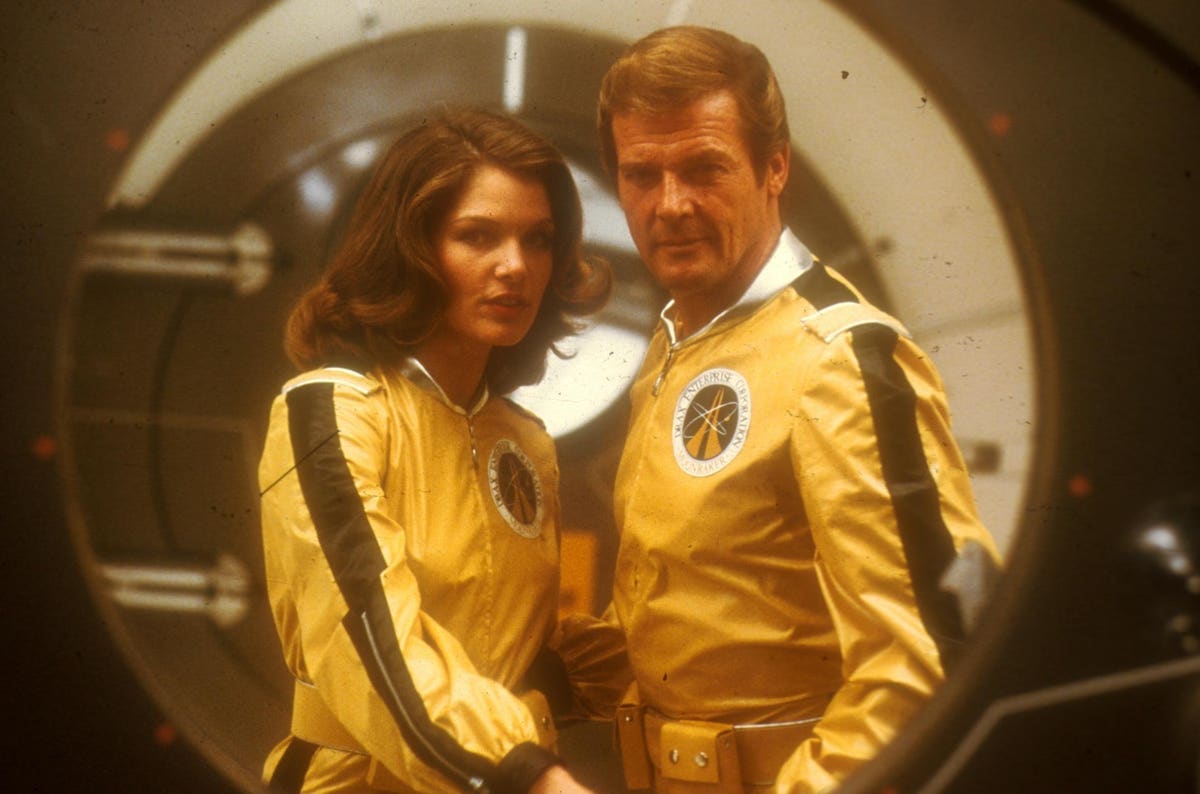 Moonraker was the third of Ian Fleming’s 007 novels, published in 1955 with a cover design inspired by Fleming himself. The plot concerns Bond going up against an ex-Nazi named Drax, who is building a defensive missile for the British but in fact intends to use it as a nuclear bomb-delivering rocket to destroy London. (This was before the U.S. or U.S.S.R. had intercontinental ballistic missiles.) Although the novel was used as the basis for a South African radio broadcast in 1956 and a 1958 Daily Express comic strip, in fact, Fleming had written a screenplay adaption, but Moonraker did not become a movie until 1979, starring Roger Moore in his fourth outing as 007.

While Bond eats and drinks his way through the book, it all takes place entirely in London, with no exotic locales (though the movie goes abroad, even into outer space).  At the time of the novel Bond is living in a Chelsea flat in Wellington Square, and—long before he acquired his Aston Martin in the Goldfinger film—he is driving a vintage Bentley, which he replaces, after winning £15,000 from Drax playing cards (Drax sneers, “I should spend the money quickly, Commander Bond.”), with a 1953 Mark VI in battleship gray with blue leather interior; cost: about £5,000.

Mooonraker begins mundanely enough with Bond noshing on filet of sole, mixed salad with his own dressing, some Brie and a half carafe of white Bordeaux at MI6’s on-premises canteen.

Things pick up when he joins his superior M at the latter’s club, Blades,  which is fictional but resembled Fleming’s own Boodles. (Drax is also a member of Blades.) M orders beluga caviar, deviled kidney, bacon, peas, potatoes and strawberries in kirsch. While Bond notes he has “a mania for really good smoked salmon,” he orders lamb cutlets—which, he declares, are “superb . . . the best English cooking in the world”—asparagus with Bearnaise and a slice of pineapple. With their dinner they drink Champagne and a half-bottle of claret. Oddly enough, Bond is brought an envelope of the amphetamine benzadrine, which he takes a touch of with his Champagne in order to keep him wide awake when he plays bridge against Drax later that evening.

Bond also becomes involved with Gala Brand, a Special Branch policewoman working undercover with Drax. After saving her from drowning, Bond takes her to dinner at Granville, an old hotel on Saint Margaret’s Bay (demolished in 1966), for brandy-and-sodas, fried sole and Welsh rarebits.

The filmed version of Moonraker used exotic locales widely, including Italy, Brazil, Guatemala and the United States, but showed little interest in food. However, when Drax, now an aerospace entrepreneur building a space shuttle,  invites 007 to his California mansion (actually filmed at the

Château de Vaux-le-Vicomte, southeast of Paris, for the exteriors, and Château de Guermantes in Guermantes), he brings out afternoon tea, which he says is one England’s “indisputable contributions to few gifts to the civilized world.” Bond, Fleming once wrote, hated tea because he felt it made the British soft, so he refuses Drax’s offer.

This was one of the many movies that Bollinger Champagne paid to have featured as Bond’s favorite. In Venice, Drax astronaut Holly Goodhead invites 007 to her suite at the Danieli Hotel, where a bottle of ’69 Bollinger is on ice.  Even the monstrous character Jaws, with a steel trap for dentures, falls in love with a girl with braces named Dolly and opens a bottle of Bollinger with his teeth on board the space shuttle.

Moonraker made a box office fortune, although it was the most extravagant Bond movie to date, one that robbed the character and the series of the kind of suspension of disbelief that grounded them just enough to be imaginable.